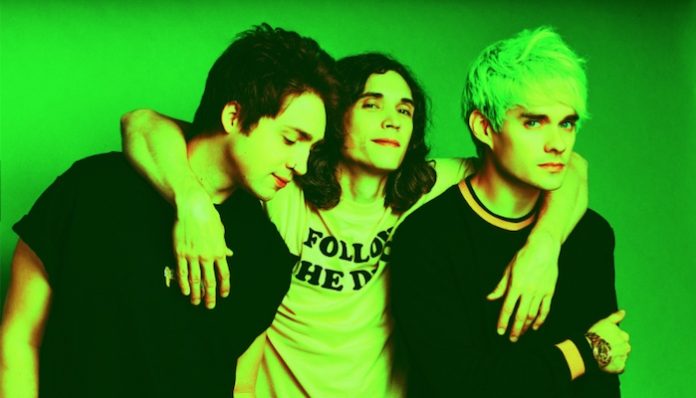 After a series of cryptic teasers and foreshadowing tweets surfaced online (and Awsten Knight’s leak), Waterparks finally dropped a new single, “Turbulent,” via Hopeless Records. We’re here to make sure you stay ahead of the curve and see how well you know the lyrics to “Turbulent.”

Do you know all the words to “Turbulent”? Take the quiz below to find out!

Waterparks have been teasing fans for months with cryptic tweets, but the band took it to the next level with a piece of merch.

Back in Februrary, the band released a tour shirt playfully mocking their fans, but many believed it unveiled the title of their forthcoming record, along with the names of a few songs.

Check out what the shirt says below. We even transcribed it in all caps to emulate frontman, Awsten Knight’s Twitter presence:

“I AM WATERPARKS TRASH. I CAN’T BELIEVE ENTERTAINMENT HAS ONLY BEEN OUT A YEAR, FEELS LIKE IT CAME OUT FOREVER AGO. EITHER WAY I’M SO EXCITED TO HEAR FRIENDLY REMINDER. IT’S PROBABLY GONNA BE ANGRY. IF “NOISE,” “LEMONADE” AND “GLITTER TIMES” ARE ON IT I’M GONNA FREAK OUT. UGH. I’M SO CURIOUS TO SEE WHAT COLOR AWSTEN DYES HIS HAIR. RED HAIR AWSTEN WILL RISE. I HOPE GEOFF HAS ANOTHER SOLO.

EITHER WAY AWSTEN IS STILL PROBLEMATIC AND A BIG POSER. I’M JUST HERE FOR OTTOPARKS. MY WIG FLIES FIRST CLASS WITH NO SEATBELT TO VENUS FOR OTTOPARKS. I HOPE THEY PLAY CRAVE. I WONDER IF IT’S GONNA BE OFF THE SET WHEN THE NEW ALBUM COMES OUT. I’LL THROW HANDS IDC. THE TOUR MERCH IS SO CUTE THIS TIME, YAS JUST TAKE MY MONEY. AND YES I AM FULLY PREPARED TO YELL AT THEM FOR ONLY PLAYING 6 SONGS DESPITE THE FACT THAT THEY’RE NOT HEADLINING, DON’T CARE. NOT MY PROBLEM. GEOFF IS CUTE.”

Later, after allegedly deleting the entirety of rumored album Friendly Reminder, fans came up with a plethora of conspiracy theories as to what the next era of the band could entail.

We have obviously since entered the green-hued (not red-hued) “Turbulent” era. However, in the midst of teasers, Waterparks were discussing big dreams of becoming Blumhouse studios first horror-inspired music video.

“I NORMALLY TRY NOT TO MAKE MY BUCKET LIST GOALS PUBLIC BUT MAN,” the band say. “I WANT A MUSIC VIDEO DONE BY BLUMHOUSE. IT COULD BE SO SCARY. LIKE A HORROR SHORT. I HAVE SO MANY IDEAS. SO SICK. BUT YA, THAT’S ON MY LIST.”

I NORMALLY TRY NOT TO MAKE MY BUCKET LIST GOALS PUBLIC BUT MAN.

I WANT A MUSIC VIDEO DONE BY BLUMHOUSE. IT COULD BE SO SCARY. LIKE A HORROR SHORT. I HAVE SO MANY IDEAS. SO SICK. BUT YA, THAT’S ON MY LIST.

HELLO @BLUMHOUSE TALK TO ME.

Blumhouse Productions are behind a plethora of horror staples such as Jordan Peele’s Get Out, James Demonaco’s the Purge and Christopher Landon’s Happy Death Day.

However, if Blumhouse were to take Waterparks up on their latest offer, this would not be the first time frontman Awsten Knight has done something spooky.

Previously, Knight portrayed a zombie in the music video for “We Need To Talk.”