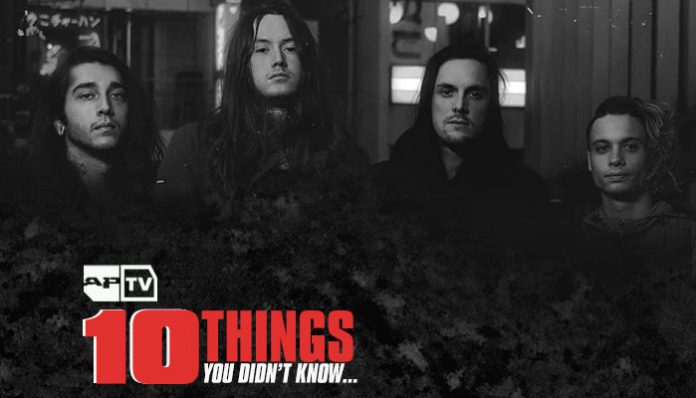 When it comes to pure power, Richmond, Virginia’s Bad Omens come right out of the box, swinging hard. Their delivery of noise-drenched harmonics, detuned bass and Noah Sebastian‘s growl makes for a pummeling rock experience. The title of their latest album, Finding God Before God Finds Me, sums up the Bad Omens experience in the most unbridled way. But in our APTV video of 10 things you didn’t know about Bad Omens, you’ll be shocked. And it’s not because they’re kitten-eating monsters birthed by cave dwellers. Far from it. These dudes are positively normal.

Bad Omens’ brand of metalcore mania has plenty of sonic layers to rage through. But when you listen to Sebastian and guitarist Joakim “Jolly” Karlsson discuss the history of their band, it feels like your hanging with buds. No steely exteriors or hard-guy posturing: Just dudes doing the work to make the rock happen.

Read more:  Do you remember “Shadow Moses” by Bring Me The Horizon?

Bad Omens share all kinds of minutiae about their history with APTV. From their hungriest days living on top of boxes and merch to playing gigs under martial law, they’ve paid some dues.

Sebastian and Karlsson freely dish on the making of the “Dethroned” video. Once you hear the story about what they did on to create the set, you’ll be scanning the video to try to figure it out. It’s definitely the filthiest video they’ve ever made. (There’s also a connection to We Came As Romans, but hey, we’re not spoilers.)

This APTV exclusive of 10 Things You Don’t Know About Bad Omens is great for stans and newbies, alike. The backstories are entertaining, the philosophies make sense and their commitment is total. Regular men making a godlike noise, Bad Omens are going to be around for a while. Here’s your intro class.