In the latest APTV MI Conversation Series video, hosted by Ryan J. Downey, Brendon Urie talked about growing up in a religious home, playing in high school bands and forming what eventually became Panic! At The Disco.

Urie listened to a variety of music growing up, including Weezer, Bush and Alanis Morissette. Later, he got into Underoath, Thrice and Fall Out Boy.

As a teenager, Urie regularly attended hardcore performances. He talked about an intense junkyard concert that ended in a dangerous brawl, which was enough to push him away from going to shows for two months.

When asked about the myth of Panic! At The Disco starting as a Blink-182 cover band, Urie dispelled the rumor. Urie and his band performed covers of Blink-182 in their early years to get used to playing with each other.

“You have to play other people’s stuff to get a feel for each other, if you want to play with each other,” says Urie.

See what else he has to say in the video!

This video is brought to you by Musicians Institute. 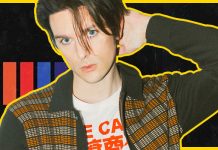