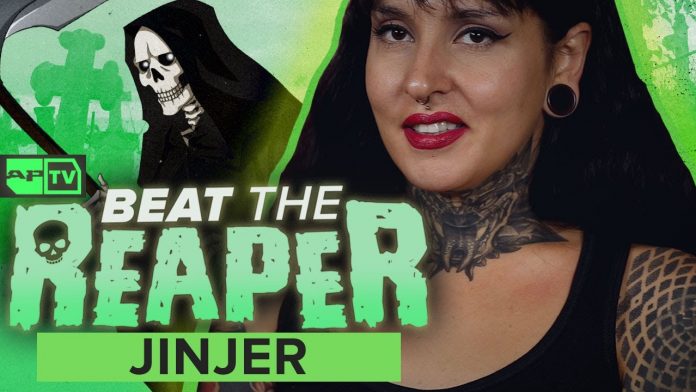 There are plenty of ways for bands to get themselves in horrible predicaments, whether it’s driving Route 90 through Montana or getting ptomaine poisoning from a careless caterer. Ukrainian metal band Jinjer know something about near-death experiences, and they shared it with APTV.

In this segment of APTV’s “Beat The Reaper,” Jinjer—vocalist Tatiana Shmayluk, guitarist Roman Ibramkhalilov, bassist Eugene Abdukhanov and drummer Vladislav Ulasevich—discuss the time they were run off a road by an oncoming motorist who was taking their half of the road right out of the middle—in a construction zone, no less.

Abdukhanov was behind the wheel of the Jinjer van at the time. He had to make the choice between going into a concrete wall or going into a five-meter ditch. He opted for the ravine. In the clip, they reveal who freaked out the loudest. (It’s not who you think it was, bro-dude.)

What saved the members of Jinjer from certain death was the same thing that got them into the predicament. The heavy downpour of rain that made visibility so lousy also made the roadside a huge mass of mud. Instead of flipping and crashing, their van was stopped by a ton of nature’s very own sludge.

“Most people would’ve died if it hadn’t been raining heavily that night,” Abdukhanov says. “There was the road, and then it just cleaved down. I wasn’t going that fast, but that deep, it would’ve killed all of us.”

Considering how solid the new Jinjer album Macro is, we are glad they’re still here to talk about it. Check out how they went ahead and won two contests; winning top honors at a Ukrainian metal fest mere days after the accident and, of course, beating the reaper.

The band will be hitting the road with Suicide Silence and Toothgrinder in April.Check out the date below and grab tickets here.