In this recurring column, we’re going to discuss the back stories behind the creation of some of the scene’s most resonant songs with the people who made them. In this installment, Philip Obenschain spoke with Taking Back Sunday frontman Adam Lazzara and guitarist/co-vocalist John Nolan, the group’s core songwriting team.

The band just released a live acoustic version of their debut, Tell All Your Friends, recorded during a 10 Year Anniversary Tour for the album, and plan to record an electric version later this year. Though Tell All Your Friends has remained one of the scene’s most celebrated and influential releases, it hasn’t seen this level of attention in years, making this the perfect time to explore the origin of its quintessential track. 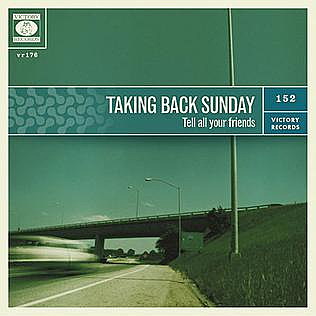 In late 2001, Taking Back Sunday hardly planned for “Cute Without The ‘E’” to end up as a single. “I don’t think we had any concept that any song we wrote for that record would ever be a single at all when we were writing, or even after the record was done,” admits guitarist/co-vocalist John Nolan. “Our buddy Christian Winters was doing videos. At that time, it was a less of an ‘Oh, this one will be the single’ and more of a ‘Hey, do you want to make a video?’ kind of thing. And it just happened to be that song,” adds singer Adam Lazzara.

After touring, solidifying their lineup (one that would see the departure of Nolan and bassist Shaun Cooper post-Tell All Your Friends,with the pair eventually returning to the group in 2010), and passing around homemade five-song demos with Tell All Your Friends scribbled on them in marker, the group signed to Victory Records. “We had been playing shows, doing small bits of touring, writing, and demoing pretty regularly along the way, but we didn’t really know we were writing an album at that point,” says Nolan. “Luckily, by the time we were signed, we had enough songs for a record.”

You both are often viewed as Taking Back Sunday’s driving creative forces, but it was actually drummer Mark O’Connell who came up with the musical concept for “Cute.”

NOLAN:Mark came up with that intro part and chord progression, and possibly the chorus too. I’m not sure if it was all him, but he was definitely the one who came and got the ball rolling with the music.

When you were working on the song lyrically, was it skewed more toward one of you, or did you both contribute to it equally?

LAZZARA: That one was both of us.

NOLAN: I can’t remember exactly, but I feel like the verses were mostly [Adam’s] stuff, and at least some of the chorus was my stuff, and the bridge part was something I came up with, and there’s the whole ending thing that was [Adam]. It was pretty collaborative: It’s hard to pull it apart, but that’s how I remember it breaking down.

Was it rooted in someone’s particular experience, or more of a shared sentiment for both of you?

LAZZARA: I think it speaks a lot to where we were emotionally. We were young at the time, so it was our take on the relationships we had experienced.

Obviously you were adding a lot of hyperbole, and piling on the imagery to really pack an emotional punch.

LAZZARA: Yeah, at that time none of us owned guns.

Do you own guns now?

NOLAN: I think that’s another interview.

LAZZARA: I do remember the [story behind the] title for that song. We were out with Rival Schools, and I think we were in Georgia. Our buddy Mike Dubin was hanging out. He was saying somebody was “cut from the team.” The idea for naming that song came from him.

Do you remember what you were listening to around the time you wrote it?

LAZZARA: I remember around Christmas time that year, the only thing I asked for were Jay-Z records. So I think we were listening to that a lot.

NOLAN: That’s true. Adam and I were both kind of obsessed with Jay-Z at that point. The Blueprint had just come out, and it’s kind of hard to find a connection in those songs, but I think there really was. The way that we just had so many words and always found a way to rhythmically make it work, I think had something to do with listening to a lot of Jay-Z at that point. Especially even the breakdown, the bridge part, has a little bit of that [sounds out the rhythm of the bridge]. It’s not directly influenced by hip hop, but I think there is some connection there.

I could definitely see that…

NOLAN: I think the things that were more directly influencing it were the Get Up Kids, the Promise Ring and bands like that. There was a lot of stuff we were listening to that also sounded more like what the song actually sounds like.

What prompted you to do the Fight Club-inspired video?

LAZZARA: John and I were sharing a room at the time. When Fight Club came out on DVD, I went out and bought a television, a DVD player and Fight Club, and that’s pretty much all we watched for months.

So that’s what you were watching when you were writing and recording?

LAZZARA: I feel like there’s a year when that and Office Space were all we watched. We even went through every special feature on the special edition disc, because we watched it so much.

NOLAN: We didn’t have cable in the apartment that we were living in at that time. I think, among the four people living in the apartment, we had two or three movies. I remember it getting to the point where Fight Club was always on. Even if no one was watching it, it would be on a constant loop.

So it was just ingrained into your subconscious at that point?

NOLAN: Yeah. I think it was Christian Winters, the director, who came to us with the idea of doing a video based on it. Then he and Adam started to talk about it and develop the idea into what it ended up becoming.

At the time, you didn’t really have a gauge of the paradigm shift happening within the scene, but, in retrospect, you can see what a standout album Tell All Your Friends has become in that movement. “Cute Without the ‘E’” has remained the standout song from that album. Is there anything you think contributes to that—why it’s the one song still singled out on an album of 10 songs which are all memorable, in their own way?

Do you feel like it’s gained more traction over the years, in its legacy as the song from TAYF?

NOLAN: Maybe. It summed up a lot of what the band was doing on that album. It had a lot of the elements of what defined Taking Back Sunday at that time. That’s my best guess as to why it might have stuck around with people. It was a quick, compact version of “Here, this is what Taking Back Sunday does.”

What’s your relationship with the song now? Do you still feel connected to it, or does it feel like re-reading an old diary, and looking in from the outside?

LAZZARA: Over the years, it’s taken on a life of its own. It’s one of those things, when we’re rehearsing for a tour or for shows, where it’ll come up and we’ll go, “Okay, let’s play this one again.” But when you get in front of people, there’s this energy. It’s become bigger than any of us. It’s really fun to play for people, just because it creates this certain vibe and energy. It’s a little hard to relate to in a literal sense.

NOLAN: What I’ve found myself doing, when we play those older songs live, is trying to tap into the same emotion that I had in the song. I think the general emotions don’t have to be directly related to the words and experience of what the song was about when it was written. I try to take the emotion of the song and find a way to connect into that, in the present, when we’re playing it live. That’s the way I’ve approached it as time has gone on.

LAZZARA: There was a time, I think a little bit after when John and Shaun first left the band, that I started doing that. For myself, and a lot of things that were happening around that time, it became hard to just be pointing the finger at somebody so openly and blatantly. I didn’t want to keep lying to people, so I just made that little change, and then it just made me feel better about the whole thing.

Do you have any other memories associated with that song, and the impact it had on the band on a broader scale?

LAZZARA: I remember seeing it on MTV2, and just being blown away and perplexed. I grew up watching MTV and to be there, that was one of the first times when I thought, “Holy crap, we’re doing it.” That was a really strange and rewarding thing. There’s really something magical when we play that song live and you have a whole room full of people singing along. It’s just this feeling that I can’t even put into words.