In this recurring column, we discuss the backstories of some of the scene’s most resonant songs with the people who made them. In this installment, Philip Obenschain spoke to Jimmy Eat World frontman Jim Adkins about one of the biggest crossover hits the scene has ever spawned, “The Middle.”

When Jimmy Eat World’s breakout album Bleed American landed in 2001, the musical landscape was a very different place. MTV not only played music videos, but was an essential distribution platform; major labels were still printing money via boy bands and the pop-punk craze of the ‘90s had largely dried up in favor of nu metal, bubblegum pop and a short-lived garage rock revival. Save for Blink-182, no other group was as essential for ushering in a new crop of bands, and no other song proved to have the massive appeal and genre-defying resonance of “The Middle”—a song with which, to this day, you’d be hard pressed to find anyone unfamiliar.

When reflecting on the climate of the time, Adkins remarks, “It was The Strokes, everybody that wanted to be the Strokes, nu metal and us. I don’t exactly know what we were doing at that party.” Though fans were already well aware of what Jimmy Eat World were capable of, especially with their prior release, 1999’s Clarity, the Mesa, Arizona foursome’s breakout success proved that a broader range of listeners were ready for poppier, more substantive, and more emotionally aware rock music to return to the radio once agaisn. 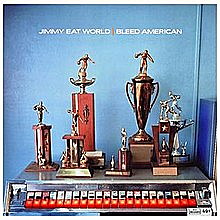 At what point in writing Bleed American did "The Middle" come about?

JIM ADKINS: I don't remember exactly, but it was all around the same time. During that period, we were touring for a couple of weeks here and there, then coming back home [to write].

Do you have any specific memories of the actual recording process? Was there anything significant about how it came together?

It just felt like it was just another song we had in the bag. It really wasn't until much later on that people started reacting to it.

Before the album came out, did you have any notion that it would be a single?

Oh no, not at all. I wasn't even sure if it would make the album. I remember that it came together really easily, and I think there's a tendency to think that because something came together quickly, it's less good than something you struggled with. At least from your own perspective, you might not have the most objective opinion about it.

Even though Mark Trombino produced both Clarity and Bleed American, Bleed American has a very different aesthetic. What prompted that shift?

We were touring a lot more leading up to making Bleed American than Clarity, and I think that influenced it. It is more straightforward, more rock in a way. When it's the four of us playing a whole lot of shows, it can't help but influence that.

Who are you talking to in the song? Is it just a general sentiment, or directed at someone specifically?

Back in the days of really early social media experiments, we had an email address [fun fact: It was JEWPOD@aol.com –prehistoric emo ed.]. That was our first venture into the internet, before websites were a main thing. It was like an electronic version of writing the band [via] post office box. There was a girl who wrote in saying that she was not feeling like she fit in at her school, because she wasn't punk enough. I guess [the song] is sort of directed at her. People love to argue about what "punk rock" means, but I think a basic tenet that everyone might agree on is a level of open-mindedness. I just found it funny that these people who were identifying with punk would be closed-minded towards someone for not being punk enough, and just felt like, "They don't get it, and you shouldn't worry about them."

You had just been dropped from Capitol before writing Bleed American. Is any part of “The Middle” a thematic reaction to that? Did it feel like vindication when it became successful?

You had been touring and making records for several years prior. Did you feel prepared for how sudden your success came following “The Middle?”

We were better prepared for it because we had been touring for awhile, and saw a lot of progress based on that. Every time we would come to a different city, there would be more people. We’d play a show, then we'd come back and be on a better bill. We definitely saw a progression of people that were coming to shows without MTV or radio being a contributor, real fans that just got something from the music. I think the worst thing that could probably happen is for a band to blow up without a connection to fans, or without some minimal true fan base. I’m very grateful that we got the chance to do everything the way we did it.

Even moreso than some of the other songs we've explored in this series, "The Middle" crossed over on a very broad scale, beyond just the musical scene you were sa part of. Looking back, it's easy to trace its influence on the scene's progression and to point to your band as a major catalyst for ushering in a new wave of artists, but, at the time, did you get a real sense of it, or were you too in the moment?

I guess one thing we noticed was that it seemed easy to make friends with other bands that we were maybe not exactly in the same scene as. I think a lot of people identified with that song, regardless of where they go for their main niche musical listening. We saw that mostly on the musician level, because we were constantly touring. We saw doors opening and took it in on that level, but it wasn’t until much later, when we stopped touring, that it was like “whoa, what just happened?”

Do you get the sense that you still attract some fans that only know you for "The Middle," even this many years later, or has your audience completely shifted back to a more hardcore fan base?

We have eight albums out now, and when we play, I see pockets in the audience that just erupt at different points in the set. Everyone has their song that they really like. "The Middle" still gets a great reaction from the whole crowd, but it's spread out a lot more than that. We're kind of back to the place where we were before it broke, but just in a bigger room.

Do you ever get tired of performing it?

Get tired of a couple thousand people going crazy because they hear a song you wrote? No, we don't get tired of playing it. If no one was showing up and people weren't getting anything from it, then we would cycle it out like every other song. But, ["The Middle"] still works.

Do you have any other standout memories associated with the song?

Getting to play it on Saturday Night Live. That was a show that we all grew up watching, and setting our VCRs to record the musical guest. It was amazing to get a chance to be up there ourselves.