Tattoos have many functions, whether as a form of expression or just to showcase some sick art. They also are the perfect way to pay homage to favorite pop culture icons in the worlds of gaming, comics, books, TV shows and movies. Head below for some musicians who sport their favorite obsessions through their choices of ink.

Jack Barakat has a The Nightmare Before Christmas tattoo across his chest but with a twist: Protagonist Jack Skellington strums one of his own guitars. Barakat revealed the artwork was inked by an artist who has also tattooed the Madden brothers.

Been waiting a few years to finally get this tattooed on me. One of my favorite tattoos by far. Today my homegirl @bloodofwolves marked it on me forever. #deathnote

Sylar frontman Jayden Panesso has a tattoo inspired by Death Note, a manga series that spawned an anime and most recently a Netflix film adaptation. Panesso is a big fan of anime, revealing in the post’s comments that he also likes Attack On Titan, One-Punch Man, Dragon Ball Z, Pokémon, Sailor Moon and many more.

LIGHTS is a huge fan of gaming, especially World Of Warcraft, with the singer sporting several tattoos influenced by the game. Among them are the Twinblade of the Phoenix, Spectral Tiger, King Varian (with a bit of her husband Beau Bokan’s likeness) and a hearthstone. LIGHTS is also into comics (having created her own as a companion to latest album Skin&Earth), so she has a back piece of Wonder Woman that was influenced by the Vol. 3, No. 2 cover.

Well that's it! @vanswarpedtour is officially in the books for another year! I've been so very lucky to have the opportunity to be on VWT many times over the years and I can honestly say it's one of the biggest and most continually impactful experiences I have had in my career. As a teen it was one of my biggest dreams to be on this tour and every chance that I get to step out on that stage I am reminded of how fortunate I am. If you don't mind, today I'd like to post a few photos from throughout the tour...starting with this shot by @dontshootskrlx ����

There’s no doubt that Andy Biersack is a massive fan of all things Batman, as evidenced by the singer’s tattoos. He has a vampire Batman hybrid on the right side of his neck, which fits in perfectly with the theme of one of his sleeves. His right arm boasts the hero’s logo and characters from the series including the Joker, Azrael and another Batman, the latter of which was done in a laundromat by Johnny B of Get Scared while the bands were on tour together.

Flashback to #Hawaii 2 years ago... ⭐️ We’re going back this year for Christmas with our families and I couldn’t be more excited! One of my favorite places in the world... ����

Most of Jeffree Star’s body is covered in ink, and many of his pieces were done by Kat Von D. Among his completed pieces are a plethora of iconic pop culture moments including Edward Scissorhands, American Psycho’s Patrick Bateman, the shark from Jaws, The Shining phrase “redrum,” Pennywise (the 1990 miniseries), Catwoman, Regan from The Exorcist, Hannibal Lecter and Wednesday Addams—just to name a few.

Ash Costello has an affinity for what she deemed “murderous clowns” in AP 340 and has used many to inspire her Halloween costumes over the years. As a result, she has Captain Spaulding from Rob Zombie’s horror flicks House Of 1000 Corpses and The Devil’s Rejects inked on her leg. Costello also has “Blow Me Up” on her right arm as an ode to Harley Quinn, which the singer tattooed on herself.

Kellin Quinn’s Deathly Hallows tattoo makes total sense when you consider he once embraced being Team Slytherin for Halloween.

With the name Juliet, it comes as no surprise that Simms would have an excerpt from William Shakespeare’s Romeo And Juliet inked on her ribs. The full query reads “O Romeo, Romeo! Wherefore art thou Romeo?,” but she just has the beginning.

While Maxx Danziger has been a fan of Pokémon since childhood, he may have never ended up with this tattoo of Haunter had it not been for what he calls “Yes Nights.” On these nights, the drummer and his friends must say “yes” to anything presented to them, so following the suggestion of Pokémon tattoos, they headed to a parlor to get it done. 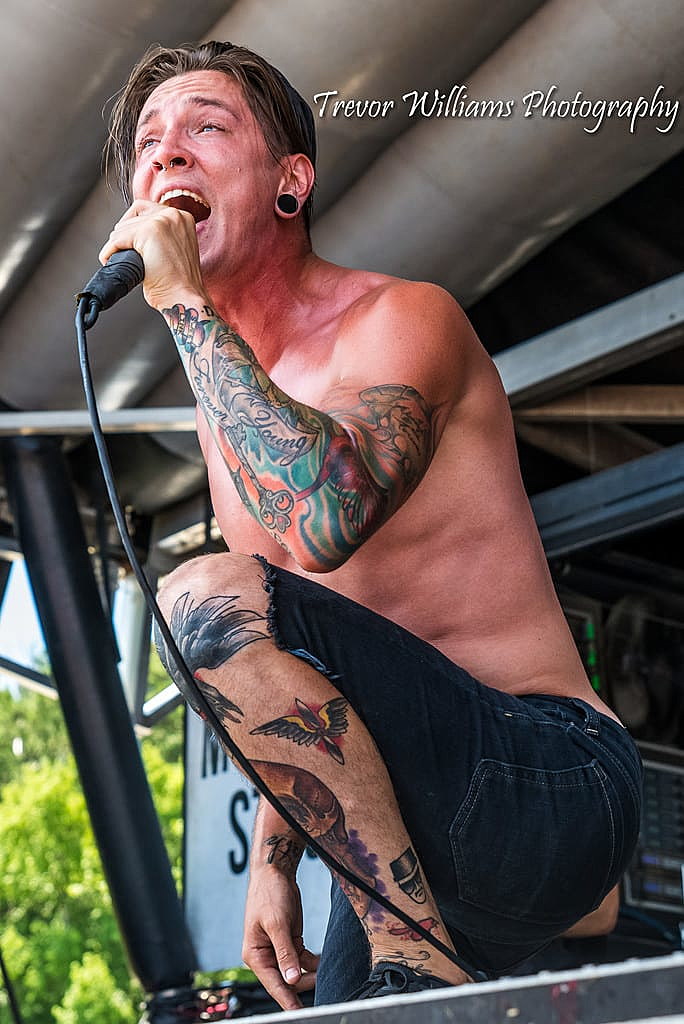 Telle Smith deems Breaking Bad as the show that introduced him to binge watching, so it’s no shocker he has the sketch of Walter White’s alter ego Heisenberg inked on his calf. The frontman added it to his collection while out on the road supporting I See Stars on 2013’s Started From The Bottom Now We Here tour. He also has some ink of Jack and Sally from The Nightmare Before Christmas meant to symbolize his and his mom’s favorite movie.

Matt Skiba has a rained-out Warped Tour date to thank for sparking his idea of a This Is Spinal Tap tattoo. As fans of the flick, he and his Alkaline Trio bandmates started quoting the line “Hello Cleveland” as a downpour hit the Ohio city. Skiba decided the phrase was perfect to commemorate his time in a touring band, so he took the idea to Kat Von D and was featured on her show LA Ink.

One of Pete Wentz’s most iconic tattoos is a sleeve mostly consisting of The Nightmare Before Christmas characters featuring Jack, Sally, Zero and more. However, the bassist also has a tattoo devoted to Howl’s Moving Castle, revealing that the title character is one he relates to the most in any film.

Chad Gilbert digs The Little Mermaid to the point of having part of his sleeve consist of its characters (and previously a pick). The guitarist sports a banner that reads “Part Of Your World” as Ariel and Flounder swim around it. He also has Ursula at the bottom near his wrist; A Nightmare On Elm Street’s Freddy Krueger and Friday The 13th’s Jason Voorhees are worked into the art, as well. Moving away from his sleeve, Gilbert also has ink inspired by Adventure Time and The Nightmare Before Christmas on his leg.