Last year, Conor Oberst was accused of raping a woman after a 2003 Bright Eyes show. Earlier this year, Oberst sued the accuser, denying the allegations and claiming his reputation had been damaged by them.

Now, the accuser has publicly retracted her earlier statements and issued an apology to Oberst, his family and fans. In the apology, she claims, “I made up those lies about him to get attention while I was going through a difficult period in my life and trying to cope with my son’s illness.”

A statement from a representative of Oberst, including the woman’s notarized apology, can be read below:

"North Carolina resident Joan Elizabeth Harris aka Joanie Faircloth has issued a public apology to Conor Oberst recanting her on-line accusations of being sexually assaulted by the musician. After seven months of attempts to reach Ms. Faircloth to request that she rescind the false accusations she made against Mr. Oberst in the comments section of the xoJane website in December 2013, and repeated elsewhere over the following months, Ms. Faircloth contacted Mr. Oberst’s lawyers and today issued a notarized statement. Her statement reads in full:

'The statements I made and repeated online and elsewhere over the past six months accusing Conor Oberst of raping me are 100% false. I made up those lies about him to get attention while I was going through a difficult period in my life and trying to cope with my son’s illness. I publicly retract my statements about Conor Oberst, and sincerely apologize to him, his family, and his fans for writing such awful things about him. I realize that my actions were wrong and could undermine the claims of actual sexual assault victims and for that I also apologize. I’m truly sorry for all the pain that I caused.'" 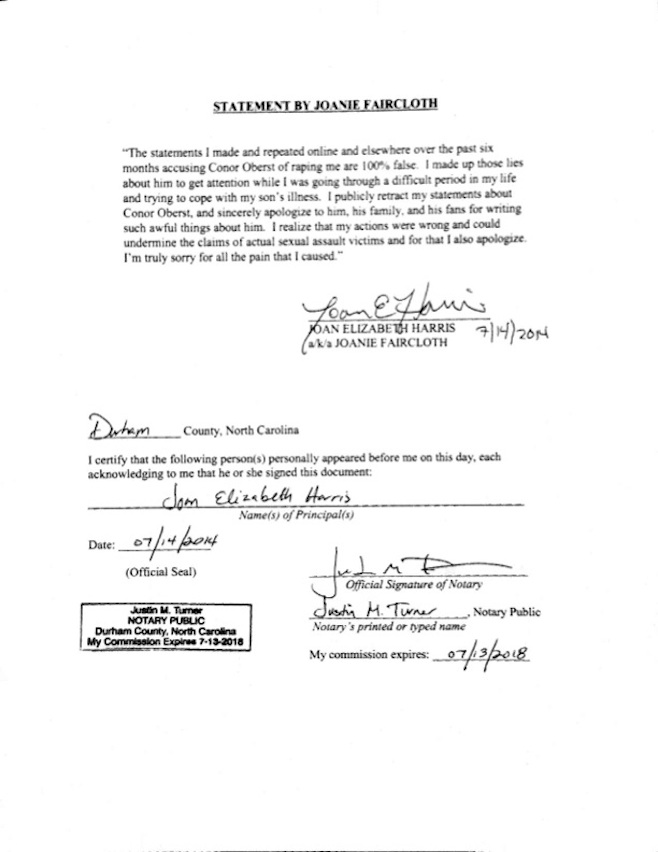 Filed Under: conor oberst
Categories: News
Comments
Leave A Comment
Back To Top