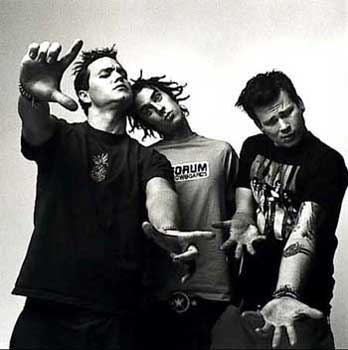 Ending months (if not years) of speculation, pop-punk icons Blink-182 announced Sunday at the Grammys that they will end their four-year hiatus and that they're back together. They didn't reveal any specific details onstage, but moments later, the band left a message on their revamped website saying that they are currently in the studio writing and recording a record. "Summer 2009" is also mentioned, implying either a release of that record or perhaps a tour.


How did we get here?

Let's take a look back…

1994
Blink sign to Cargo Music and record their debut full-length Cheshire Cat. The band are pressured to change their name by an Irish pop band who go by the same name. The Yankee Blink trio add "182" to their moniker.

1999
Blink-182 release the Jerry Finn-helmed Enema Of The State, featuring hit singles "What's My Age Again?," "All The Small Things" and "Adam's Song." After being embraced by MTV for their whimsical persona and satirical music videos, the band move more than 15 million copies of the album.

2000
Blink-182 release The Urethra Chronicles DVD and the live album, The Mark, Tom And Travis Show (The Enema Strikes Back!). The music video for "All The Small Things" wins "Best Group Video" at the VMAs.

2003
Box Car Racer disband after a headlining tour. Blink-182 release their self-titled full-length, featuring the singles "Feeling This," "I Miss You," "Down" and "Always." The band embark on the DollaBill Tour, a return to smaller venues for the band.

2004
Blink-182 share a summer amphitheater tour with No Doubt. The band play what would later be recognized as their final show on Dec. 16 at The Point Depot in Dublin, Ireland.

2005
In mid-February, the band cancel their scheduled performance at Music For Relief's Concert For South Asia and they cancel their subsequent tour. On Feb. 22, Tom DeLonge leaves Blink-182 and the band go on "indefinite hiatus."Geffen Records release a greatest hits album in November, which ascends to No. 6 on the Billboard Top 200.

2006
The Transplants break up. DeLonge's new band Angels & Airwaves (featuring Hazen Street guitarist David Kennedy, Distillers bassist Ryan Sinn and Offspring drummer Atom Willard–30 Seconds To Mars bassist Matt Wachter would later replace Sinn) release their debut We Don't Need To Whisper on May 23 and the album debuts at No. 4 on the Billboard Top 200. (+44), the new project of Hoppus and Barker, release their own debut, When Your Heart Stops Beating, on Nov. 14. It debuts at No. 10 on the Billboard Top 200.

2007
(+44) take part in the Honda Civic Tour with Fall Out Boy, the Academy Is… and Cobra Starship. In August, (+44) cancel European shows in order to concentrate on their next album. Angels & Airwaves release their sophomore full-length, I-Empire, on Nov. 6. DeLonge unveils Modlife, a social networking website and online operating system for musicians.


2008
Angels & Airwaves perform on every date of the Vans Warped Tour and embark on a fall tour with Weezer. On Sept. 19, Travis Barker is critically injured in a plane crash in Columbia, South Carolina.

Although Hoppus says that his relationship with DeLonge is improving in November, Barker promptly denies that Blink-182 will reunite.

January 2009
An interview with Hoppus surfaces in which he hints that (+44) are finished and that a reunion with Blink-182 isn't an impossibility. He also reveals that he and Barker are working on solo records. Angels & Airwaves reportedly begin work on their third album. AP readers vote Blink-182 as "Band Reunion I'd Like To See in 2009" in the annual AP Readers' Poll.