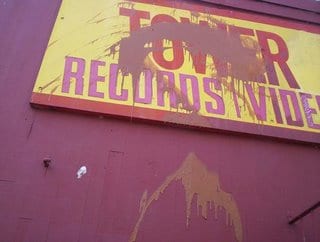 This past Saturday was National Record Store Day across the nation.

I'm sure you heard what the point was of it all; Go to your local indie record store and buy something.

Show your financial support and help keep their doors open.

Before they go the way of the:

Yet, if you read up on what industry "experts" are saying all over the web, maybe…just MAYBE…this is supposed to happen.

Maybe the record stores are meant to go away.

This is how industry upgrades itself.

In the past 15 years we went from being helped like:

So we all went online.

Well, most of us did.

The rest of us, kept traditions strong by still shelling out $16 for a CD, or $25 for some limited-edition vinyl at our local indie shop.

I understand why, too.

You see, for some strange reason, it just doesn't bother me shelling out $16 for a CD at:

Even though it DOES bother me doing the same at:

Not sure why it does.

Like, I'd have no problem dropping $16 for music from indie rocker Eric Nicolau:

But, no way in hell would i drop $16 for another meandering piece of work from:

Maybe it's like the Twitter friend the other night who said they had no problem stealing music from Britney Spears because, well, "she deserved it," he said.

But to steal music from Manchester Orchestra? "Hell, no! I went out and bought their CD."

So does it come down to how businesses or artists portray themselves in the end?

Produce disposable music and you'll be disposed of rather quickly(?)

Be a bitch/asshole to us with customer service and we'll treat you back as such(?)

And maybe that's why we treat the indie stores that are left with respect?

They treated us right and we are now returning the favor.

By having a national saving-of-our-musical-heritage day.

I'm not sure if indie record stores are supposed to go the way of:

Maybe, there will be a resurgence just like what happened when cable TV came out and attendance at movie theaters went in the toilet for a little while. That generation's industry "experts" said, at the time, that consumers wouldn't want to step foot in a movie theater ever again now that they could sit at home and watch films in the privacy of their own pajamas.

Sure, maybe the Technology Revolution of Netflix and Pay-Per-View are quickly killing:

But I have a very big feeling that, in a way, by us continuing to support indie record stores (who've never stopped supporting us), all we're really doing is quickly killing:

And providing a much brighter musical future for: