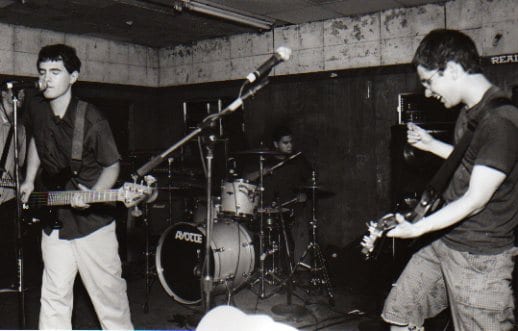 For this installment of Bands That Time Forgot, I want to profile one of the most important groups to my personal musical evolution, Gods Reflex.

Odds are, you've never heard of Gods Reflex, and that's not surprising. Even though the band existed in some form or another for nearly a decade and did more than their fair share of DIY touring, they never got any significant mainstream attention. They were kings of the pre-millennium Northern Illinois emo scene (a phrase I just wrote with a straight face, as difficult as that might seem). I don't know when they exactly they formed (sometime in the mid-'90s) or what they used to sound like (a friend once told me their early demo tapes were a cross between Operation Ivy and Anti-Flag, only much worse). To me, Gods Reflex were always there. They were the first local band to transcend the "local band" stigma for me; their songs were tight and musically adventurous, with literarily intense lyrics from bassist/vocalist Zach Newman, perfectly off-key background yelps from guitarist/vocalist Phil Goudreau, intruiging guitar leads from Marcus Spitzmiller and propulsive percussion from Jesse Carmona. Every time I saw them, I was blown away. They had the intelligence and aggression of Jawbreaker, the youthful vibe of the Promise Ring, the compelling emotion of early Jimmy Eat World–at 16, Gods Reflex were the best band I had ever heard. (And no, they weren't a Christian band.)

The band released a slew of 7-inch singles and splits as well as two full-lenghs, 1998's A Brief Lesson In Affection and 2000's Scenes From A Motel Seduction, on Chicago label Johann's Face Records (the same label that gave Alkaline Trio and Smoking Popes their starts). You can still download one of the standout tracks from Affection, "The Summer In Between," for free here, but my personal favorite track from that record is "That They Should Never Weep." I have distinct memories of seeing the band play a free show at my local record store, 15 Minutes Compact Discs, and some friends walking across the street to a gas station to acquire Wet-Naps with the sole purpose of throwing them at the band during this song's opening line. It was so odd and weird, but I'll never forget it:


Gods Reflex – That They Should Never Weep by Scott Heisel

In the time between Affection and Seduction, the band toured their asses off, and I must've seen them more than a dozen times at local and regional shows in such odd locales as a bowling alley basement, a bait shop and a log cabin. (Oh, the fun of trying to put on shows in the late '90s.) They got tighter and tighter, and really became a force to be reckoned with live.

The band released their second full-length, Scenes From A Motel Seduction, in May 2000. And I did one of the worst things I've ever done–I panned it. Looking back, I was a dumb 18-year-old who didn't get the record at all, so consider this my formal retraction. Seduction is a more musically complex, lyrically obtuse album from its very first song, "How I Learned To Unwind."

Johann's Face is also still hosting a free MP3 download of "Put Down That Guitar," one of Seduction's more aggressive highlights, here, but my two favorite tracks off the album were (and still are) "Careering" and "Mayday." Please, if nothing else, listen to these:

Unfortunately, the album still didn't break through the band to a wider audience, and later in 2000, Spitzmiller left the band. Gods Reflex soldiered on with a new guitarist (Nick Alberts, formerly of the February Stars Union) for a little while before eventually downsizing to a three-piece. They officially released one more song, "Talk To Me," on a local compilation, before disbanding in May 2002. (They later reunited for an official last show at Chicago's Fireside Bowl in February 2003.)


Gods Reflex – Talk To Me by Scott Heisel

Gods Reflex at the Cabin, Rockton, Illinois, 2001. Photo credit: me

Newman went onto start a new band called the Moment, who he fronted until 2004, playing on their Sound Of The Moment EP; Carmona and Goudreau resurfaced in indie-rock act the Braves, who released a handful of albums before breaking up in 2007. Later that same year, Newman, Spitzmiller and Carmona re-convened in secret and began recording a batch of songs with no intention of being called Gods Reflex; yet in February 2008, that's exactly what happened, when the trio self-released Gods Reflex's official third album, the absolutely brilliant When It's Down To This. You can stream four songs from that release on the band's MySpace page, including the incredibly cathartic take on whether or not God exists ("A Chance In A Disaster"). Please go listen to it immediately.

But even with an incredible comeback LP to their name, the resurrected Gods Reflex only lasted a few months longer, playing a handful of shows before re-entering hibernation. Carmona and Goudreau are in a new band together, Crankupmadonna; I currently can't unearth what Spitzmiller or Newman are working on, if anything, so if you know, please leave a comment. Maybe the stars will align one day and Gods Reflex will return to a world that's prepared to fully embrace them. One can only hope.

Oh, one last thing: You might not have heard of Gods Reflex until now, but odds are, you own a CD by someone who has. If you take a gander at the band's old guestbook, you'll notice a few comments from way back in March 2002 left by a guy named Patrick, expressing how excited he was that his band were getting the chance to open for Gods Reflex. Maybe you've heard of 'em: They're called Fall Out Boy.