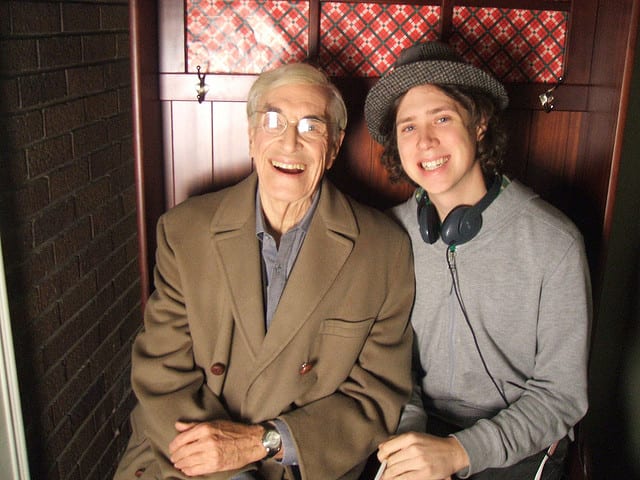 In AP, we've told countless stories about bands who have built their careers from scratch, working hard, never giving up and eventually realizing their dreams. Merging their talents with timing, perseverance and a little bit of luck, bands who might've slipped into obscurity have gone on to sell millions of records.

Well, it works in the film world, too. In the spring of 2009, while I was editing AP's film section (RIP), I had the pleasure to interview Nik Fackler, a young filmmaker from Omaha, Nebraska. His first feature-length, Lovely, Still, is seeing a wide national release next month. Oh, and it stars Martin Landau, Ellen Burstyn, Adam Scott and Elizabeth Banks. You may've heard of them. No big deal. But we'll talk more about the film in a minute.

I first heard of Fackler through my brother, who was a film student in Omaha at the time, and had heard of Fackler's work through a mutual friend. I'm not going to lie, I definitely took an initial interest in him because he is from my home state, and because of its population size and relative location to the coasts, I always enjoy hearing about artistic and creative endeavors coming from the state. (Don't get me wrong–I think there are tons of great things coming from and going on in Nebraska; I just think a lot of people outside of the state never realize it. Okay, stepping off the soapbox now.)

Anyway, you should check out the original story that ran in AP. But in a nutshell, Fackler started making shorts, which led to him making music videos for a bunch of bad-ass Saddle Creek Records bands, which in turn got his work noticed by an agent in Hollywood who wanted to see a full-length script. And although it sounds like a whole lot of fate, if Fackler hadn't been continually building on his craft, constantly looking for new opportunities, and exhaustively working to hone his talent, none of it would've happened.

I guess my point is, there are plenty of bands who could take a few lessons from him, you know what I'm saying?

Anyway, the film is a story of an elderly man (Landau) who finds love for the first time. You should watch the official trailer. The fact that Fackler was able to secure such a stellar cast for his first full-length speaks volumes about what the script is probably like, not to mention the fact that he's offering some very compelling roles to a generation who (unfortunately) doesn't get them very often anymore. Anyway, the film started playing awhile ago on the festival circuit, and this holiday season (it's a holiday movie, by the way) you'll hopefully be able to see it in a theater near you. Go to it to see a little bit of Omaha (where most of it was filmed) and also to acknowledge the work of someone who wasn't afraid to think really big, right out of the gate. It's a lesson that everyone could stand to take with them a little bit–no matter your passions.