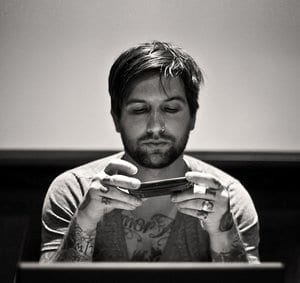 I was considering waiting a little longer to report in with an update, but the truth is I don’t need more than two weeks to get a grasp on my surroundings and provide a thorough account of what will most likely be the protocol for the weeks we have still left to travel. This is not my first rodeo, nor do I abide by the adage “You cant judge a book by its cover” because in this instance, I am not amidst books. I am, for the most part, in the magazine section. I am up to my neck in people and bands whose sound and fashion is flashy and bright with huge fonts designed to sell spontaneously while you’re patiently waiting to purchase the substance that actually motivated you to leave the house in the first place. I don’t need to read every periodical on the shelf at Wegmans to know that Lindsay Lohan is vapid, or that the cast members of Jersey Shore are shameless. I’ve heard it once and chances are it’s not going to change any time soon, so best I can do is watch it pass and not allow myself to get caught in the draft it creates. This, however, is not as easy as I thought, given that from the moment I wake up until the moment I fall asleep, I am immersed in this “music” and standing along the side of the thruway watching these fads pass you by does not automatically make you an innocent bystander. Sometimes it makes you a fan of Nascar. You are irrevocably tied to what you are watching. You are a part of it. I learned this the hard way when I went to see some band (I'll only omit their name because I don’t want to draw any attention to them WHATSOEVER) because I heard they were awful. It was the all too familiar tacked on “mosh” part placed sloppily among synth-pop dressed up in clothes that look as if they were stolen straight from Punky Brewster's closet and fronted by a manorexic with gross hair singing about having a dance party or fucking or something equally as transparent and phoney considering you never see them off stage hanging out with anybody. Needless to say, it WAS awful. Big surprise. I should have just taken Greg Puciatto's word for it and saved myself a five-minute walk. However, as I was standing there with the same look on my face as I must have had as a child watching Faces Of Death, someone approached me and said that Every Time I Die had played a great show earlier that day and they were a big fan. That was it, joke over. I was caught. He had now seen me see them and mentally classified me as a fan. I had inadvertently put a stamp of approval on the very brand of shoddy craftsmanship that I have vowed to eradicate since the conception of Every Time I Die and instantly I was catapulted into a “Larry David Moment” where I was caught red handed doing the exact OPPOSITE of what was intended. I stumbled. I tried to immediately micromanage, pretending I was looking for a DIFFERENT stage. I don’t think he bought it. I was, in that moment, shifted from observer to participant. I had crossed the line between “watching TO BE entertained” and “being entertained” which is a very important distinction I have tried to make, particularly when watching "2 Girls 1 Cup" or a Sarah Palin speech, which oddly enough appall me in the same manner. After a few seconds of awkward silence, I simply shook my head and walked away a few ounces heavier. I find I do that a lot lately.


I had a cassette single of that god awful Crash Test Dummys song when I was young because I heard it on the radio and it got stuck in my head. I was a little kid who liked music and that was a band that MTV pushed. I didn’t know any better. I not only ate up the music that media pushed on me, I almost choked on it. There are a lot of things I heralded that I now look back on and cringe, but the truth is, it gave me character and in a sense, I now I praise those mistakes for being the driving cause that steered me away from later deviations on that original horrendous music. I made those mistakes and corrected them on my own because I didn’t have an iTunes “Genius” suggesting other, better bands and infinitely expanding my realm of cultural consciousness. But NOW PEOPLE DO, so what is their excuse? Why are so many people buying only what is played on the radio when they now have the internet and access to unlimited resources of discovery? What is it that drives you to assemble in masses and sing along to lyrics about “shots” when you are easily five years under the legal drinking limit? Why are you buying shirts that say “Fuck Bitches, Get Money” when most of you have never: a) fucked or b) gotten money? Why have you stopped doing embarrassing things like singing along to your favorite bands in front of a MIRROR and started doing it in front of a camera streaming to YouTube? The permanence of the internet is what made learning from mistakes and moving on now impossible. Please think about this: you cannot simply cringe at the thought years later. You can also go back and watch it, along with everyone else IN THE ENTIRE WORLD. Oh, and when the fuck did the new hairstyle become a deep swoop that crosses your entire forehead and makes 16 year-old boys look like 80 year-old balding men. You look like an asshole. Stop it. You’re embarrassing your father.

If this is a little too much mumbling and grumbling without enough conflict resolution, consider this month's installment a tribute to the late, great Harvey Pekar. However, I do believe that we can change the overwhelming acceptance of brazenly stupid music by ignoring it. This “Glow-Pop” that has contaminated music like poison in the well simply needs to be seen for what it really is–a shameless exploitation of inexperience, no different than what ICP has done for the millions of unhinged sociopaths. It has given kids a focus, an place to assemble, an anthem and much like religion, it has given them a unifying symbol and convinced them that the more people “hate on it”, the more right they are in standing tall in the face of opposition. But what they don’t explain is that “outsiders” don’t hate a lot of music because they don’t understand it.

They hate it because they are smart and the music sucks.

The problem is that kids here at the Warped Tour don’t know that half of these “bands” play to an iPod track or that most “artists” don’t even write their own songs. They don’t realize that the singer of Never Shout Never is just a poor man's Justin Bieber or that most of these “moshcore” bands that use 808’s to really BEEF UP their bass tone are the most recent manifestation of nu metal. Really guys? The dude from Milli Vanilli KILLED HIMSELF because he was so ashamed at being outed as a phony and yet on a daily basis I walk out into the crowd and hear autotuned vocals in a live setting. What the fuck has happened to us? Don’t we want more than this? Music once made me want to play music. Now there are days that it makes me want to never listen to it again.

I know that I’m essentially preaching to the choir, but I cant express enough how important it is that people just take some time to think about the music they allow into their lives. It really can be an amazing thing, and the fact that bands like ETID and Parkway Drive and the Dillinger Escape Plan and Alkaline Trio and Four Year Strong can play for hundreds, sometimes thousands, of kids every day is not something I take for granted. There are still bands that MEAN it. they get it. unfortunately, they are a dying breed because “getting it” is exactly the OPPOSITE of what’s lucrative. Street credit is not ACTUAL credit that can pay the bills. Put your ear to the ground, take off your stupid fucking neon shirt and get a haircut. Oh, and what happened to throwing tomatoes at people onstage that just plain sucked? I say we bring that back. As a matter of fact, I think Breathe Carolina are playing soon…..