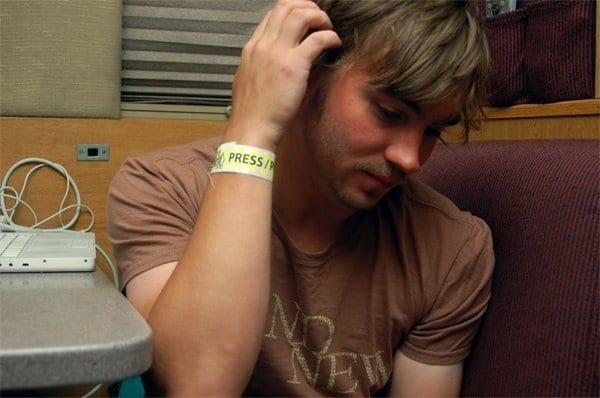 All of a sudden, I know what it must feel like to be Josh Farro. And to a lesser extent: Zac Farro. (Nobody thinks it was his idea.)

After five years at Alternative Press, three cover stories and countless nights spent before the warm glow of my computer, I’m stepping down as web editor to pursue my solo career.

If I’m lucky, Hayley will go on MTV to explain the whole story.

When I first started at AP, I hadn’t ever been outside of the Eastern time zone. But thanks to this job, I’ve been able to stumble through most of the major cities in North America and I even know which roads to avoid in L.A. (answer: all of them). I was able to interview and/or meet most of my musical heroes and if the Google alert I set up for my own name is correct, I was lucky enough to have some of the things I’ve written quoted on Tumblr and at least one high school yearbook. And that’s a pretty sweet feeling.

Now that my desk has been cleared of all but four of the thousands of Coke cans that have called it home for half a decade, I’ve decided to take a look back at some of the memories that will stick with me long after I’ve spent my last paycheck (likely on more Coke).

Playing keyboard with 30 Seconds To Mars during soundcheck
One of the occupational hazards of working behind the scenes in the music industry is that you don’t get starstruck all that often. That shit doesn’t apply when you’re dealing with professional dreamboat Jared Leto.

I took the assignment to write the 30 Seconds To Mars cover story last year partially because I genuinely couldn’t stop listening to This Is War, but also because Leto is a notoriously difficult interview. It was sort of the ultimate challenge. Plus, it would be killer to have a picture with him on my Facebook page.

Turns out the guy is just about as intense as you’ve probably heard, but still, just a guy underneath. But sitting alone with him in the back of the band’s bus, it was one of the only times I ever found myself thinking, “How the fuck did I get here?” I mean, dude is in Fight Club. (I knew I probably couldn’t ask him about it because, after all, he wouldn’t be able to talk about it.)

After a day with the band, I was standing on the side of the stage at the House of Blues in Cleveland as they sounchecked “Stranger In A Strange Land.” It was going to be the first time they ever played it live. I was diligently taking notes on what shade of gray scarf Jared was wearing, when he glanced over and beckoned for me. They had already started playing when he pointed to a small keyboard. I don’t play keyboard. (Not since the accident.) But he pointed to the keys I would need to hit, and I played five of the six notes correctly. It was about the happiest I saw him. And it’s the closest I’ll likely ever be to being a rock star. And I haven’t been able to watch American Psycho the same way since.

(This isn't video of me playing with them, but it's the real creepy synth part in the intro.)

Literally bumping into Lil Jon on Warped Tour
I spent all of the summer of 2009 on Warped, and it was without a doubt, the best time I’ve ever had. I’d done two or three weeks of other tours in the past, but that two-month trek is almost indescribable. If I had to choose one word, it would have to be “sticky.”

I remember being on the bus in the middle of the day on Long Island when somebody told me Lil Jon would be performing with 3OH!3. In four minutes.

I literally ran through the entire festival grounds jumping over barricades and making the most out of the opportunity to knock over as many 14-year-olds as possible. I got there after 3OH!3 had started, weaseled my way backstage and bumped into a guy recording the performance with a Flip. He looked at me as if he wanted to punch me (over the years, I’ve developed a keen awareness of said look), then almost instantly put down the Flip and jumped onstage to the roar of thousands of unsuspecting, sunburned kids. It was Lil Jon—who I only really knew from Chappelle's Show. It was like that moment in Almost Famous when the camera follows Billy Crudup backstage from a normal conversation onto the stage as the crowd erupts.

After the set, I managed to convince Jon's entourage to give me three minutes with him. I asked him a question and it suddenly got really loud, so he said, “Whaaat?” It was like the culmination of all my work and those 25 minutes of my life have to rank among the most surreal.

Doing the best interview ever with Josh Homme of Queens Of The Stone Age
Mind you, this wasn't necessarily the best interview from Josh Homme's point of view, but it was probably the funnest, easiest interview I did at AP. I'm not gonna get into specifics, but you should check it out. All you need to know is that it took us, like, five attempts to actually get on the phone at the same time. Also: Josh Homme is the coolest man in the history of ever.

Driving from Philly to Boston with Anthony Green and Good Old War
My first cover story was on Anthony when he released his solo album, Avalon. I had a pretty cool history with him—I first interviewed him when I was a reporter in Upstate New York right after Circa came together and we both kind of ascended in the industry at the same pace.

It was a true journey getting to him in his hometown of Doylestown, Pennsylvania. It took a plane, two subways, a shuttle and a 45-minute train ride just to get to his town, where I more or less hitchhiked to arrive at my hotel.

It was crazy Kerouac.

After one evening with Anthony, we weren’t entirely unconvinced we weren’t estranged brothers separated at the hospital as part of some far-reaching conspiracy we would never fully comprehend. That entire trip was probably the pinnacle of awesome when it comes to my AP memories, but the part that stands out most was the van ride from Philadelphia to Boston with Anthony, his then-fiancee Meredith, and his best friends/backing band Good Old War.

First of all, Good Old War never stop singing. They order food at the McDonald's drive-thru window in perfect three-part harmony. Second of all, Anthony is like the fourth member of the band. The quartet sang some of the most incredible songs—from Radiohead covers to stuff nobody else had heard yet—during the six-hour ride. Equipped with my microcasette recorder, I thought about secretly pressing the record button. But I refrained. Instead, I just listened. I wanted to keep that moment in my mind, rather than having a scratchy, shoddy version captured on a tiny tape. I gazed out the window with the New York City skyline hazy in the distance, awash in a feeling of pure gratitude to be in a position so many people would kill to be in.

It’s a feeling I probably should've allowed to sink in more often over the years.

Although my time at the AP skyscraper is coming to an end, I can’t thank everyone at Alternative Press, all of the musicians I’m lucky to now call friends, and all of you enough for making it so amazing.

I guess the moral of the story is this: No matter what you do or where you are, make sure you stop at least every so often to look out the window.

Also, if Michael Scott can leave Dunder-Mifflin, anyone can leave any job.