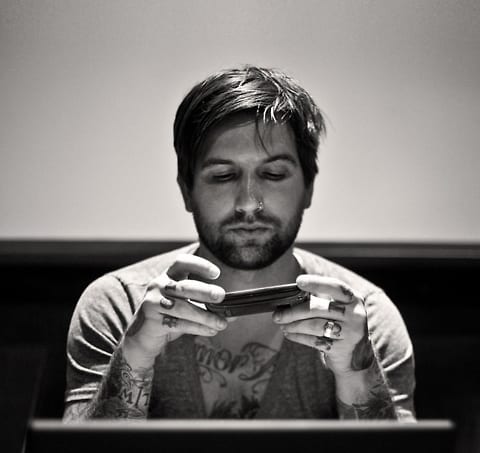 It’s impossible to make a grand entrance in text. It’s even harder to make a grand RE-entrance. The whole process is as anti-climactic as it gets. Caps lock just looks juvenile and exclamation points are for people that aren’t good enough at conveying feeling in the context. When I see them, I feel as if a joke is being explained to me which means the joke is a failure and if I used them to announce my return to Alternative Press, I too would feel as if I had failed in relating just what a big deal it is that I’ve entered the fold once again.

HEY EVERYONE, IM BACK!!!

How self-congratulatory does that look? Once I knew a kid who threw himself a big going away party because he was moving out west. We all said our goodbyes as he got into his car and when he was out of sight, we went back inside, hung out, talked and watched tv until we fell asleep. The next afternoon he came barging through the door and with a goofy smile on his face, declared he was home. He chickened out somewhere around Chicago and turned around and expected us to be happy for this decision. I just thought he was pathetic. Because of him, I have always shied away from “returning”. It feels a little pompous- that prodigal son arrogance. Truth is, to a lot of people I’m not back. I’m just here. To even more people, even that doesn’t matter. See, I once wrote for the printed version of Alternative Press. Chances are you skipped over my contribution to the magazine when it got to your house in search of the pages that contained close-up pictures of some shithead with awful hair to put on your wall. I get that. In the blinding light of assorted neon that dominates our music scene, its hard to catch the glare off a tiny little gem residing at the bottom of a page. My column was that gem. I paid $15 a week of my own money to buy the worst movies I could remember liking, then I would get drunk and watch them and take notes. It was something I looked forward to every month. It was nostalgic and it was fun and it was good, but then like everything fun and good, it was over.  I really didn’t have an outlet for my writing. facebook was cool for a while but it was so oversaturated and competitive that I bowed out. I would spend an hour of my day reading about peoples children. I didn’t even like those PEOPLE why in the fuck would I like their children? I still like twitter. Its purified. The verbosity is filtered and what is left is the essence of wit.  The one problem I have, however, is that it arms the clumsy. If I spell something wrong or share an opinion that might not be the most popular, Harry Hardcore from Sauget, Illinois can tell me directly. Then Harry Hardcore can take that pride he has in correcting my grammar or spelling and become empowered, and another term for an “empowered anonymity” is “critic”. Twitter breeds critics and critics are the lowest form of life on the planet. They might even be worse than Juggalos.

This blog is my way of turning the “auto-correct” off on my entire life. (Just because I taught English SIX YEARS AGO does not mean I have a mastery of the English language). Its where I can formulate ideas that are a bit longer than 140 characters and not have to do so according to that insidious notion of instant gratification. “mentions”. “likes”. “comments”. “tags”. Its all just a way for what we think to be validated and too often rather than being a result of what we think, it has become the CAUSE of what we think. how often have we done something JUST to talk about it on facebook? Here is where I will wean myself away from that notion. Its where I can now be as self-indulgent as the completely emasculated half-wits who not only found the audacity to breed, but to share the inane details of their lives with others. I will review awful movies. I will probably make fun of half the bands that Alternative Press heralds. Ill do my best to entertain you, and if you’re inspired to do something new in the meanwhile, awesome. Come out to a show and tell me about it, I’d be happy to listen. Ill write new things for anyone who wants to read. I’ll ramble. Ill spell things wrong. I’ll misplace apostrophes. But above all, I promise that I’ll ignore Harry Hardcore.