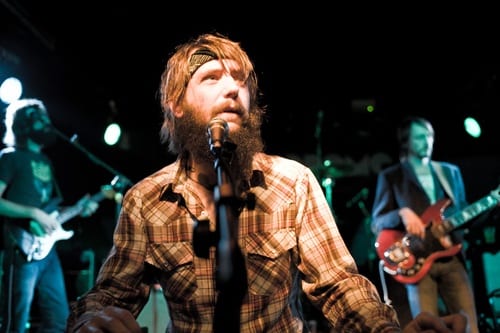 These are just a handful of the shows (all of which being some of my favorite bands ever) that were more or less ruined, intruded upon or less pleasurable than they should've been due to the inexplicable number of frat dudes (and the clueless drunk girls who tend to congregate around them) also at these shows. Before I go into my rant, which is spurred by the overall crowd at the Band Of Horses show Monday night at the Cleveland House Of Blues, I wanted to clear a couple things up:

1) I don't care if you drink at shows; just don't spill your beer all over me without apologizing (or spill it in the first place, really)
2) I don't care if you want to dance your pants off at a show, as long as you're respectful of the space; if everyone's dancing and going nuts, then I'm all for it. If you're standing near the back around people who are mostly standing still, only tapping their feet or bobbing their head, then take your flailing to the floor up front–that's why it's there
3) I won't ever be upset with anyone for singing along with the lyrics–no matter how off-key they are–that's all part of the fun, and chances are, I'm right there with 'em
4) I'm not talking about shows by bands such as Sleigh Bells or Foxy Shazam that are supposed to be loud, rowdy and nutso, mmmkay?

Okay, so now that we have that out of the way, have you ever loved a band a ton, been so stoked to see their live show, and then got to the venue and discovered you might as well be at a basement kegger at the local university–and been completely confused by it? It's one thing if you're heading to a Buckcherry or Dave Matthew's Band show–you'd expect that kind of crowd then. But my question is this: Since when did every single indie-rock band with awesome lyrics and/or interesting instrument choices (i.e. banjo) become anthem-bearers for the knuckledheads that go to two or three shows a year and are more excited about the bar than the band? Apparently, since forever. It's just taken me a long to to accept it. But seriously? Why are these kinds of dudes at a Ben Kweller show, except to scream for “Wasted And Ready” (which is like a zillion years old at this point). And it floors me how many douchey types are in love with Ben Folds' “The Luckiest.” Don't they know that's totally emo? Anway…

My first experience with such a scenario was the first time I saw Ryan Adams. It was at the Avalon in Boston (now the House Of Blues, I believe) in 2005ish. I completely fell in love with Heartbreaker in 2002 and had subsequently purchased every Ryan Adams album (which is a lot, he's prolific), and I knew pretty much every song, frontward and backward. However–and this is my fault, I admit–I really didn't realize just how big of a hit “New York, New York” was. I never really listen to the radio, outside of NPR, so yeah… Either way, the crowd was almost solely made up of drunk dudes with meaty necks who only knew that song. This was the first time (but alas, not the last) I would get beer spilled on me at a show, and it was also the first show I ever left early. As much I loved Ryan Adams, the combination of the inane chattering that reached a dull roar early on, and never receded; the hollering for “New York, New York”; and the general lack of respect for the what seemed like a handful of people who actually wanted to hear the band (novel, I know) was a great enough irritation that I simply left.

If only I'd known that's the way it would keep going… To be fair, most of the shows I attend at smaller clubs like the Grog Shop or Beachland here in Cleveland (or the Middle East and Paradise while I still lived in Boston) aren't as susceptible to that type of crowd. (Though Conor Oberst tended to be an exception, when a drunk chick kept screaming “PLAY YELLLLLOOOOOOWWWW BIRRRRRD!” all. effing. night. For the record, if you're reading this, drunk girl, the song you're referring to is actually called “Poison Oak,” and it's a Bright Eyes song–a distinctly different band than Conor & The Mystic Valley). But anyway, it's gotten to the point that I almost dread going to shows at certain places when I know they're going to be sold out. I will never quite understand why people who only know/like one song will treat a music venue like a bar, talk over the musician–or worse–constantly call out for the band to play “the hit.” Like they're not gonna play the hit? C'mon! Stop. Requesting. Songs. Seriously.

Now, I know what you might be thinking: “Rachel, these people paid good money for their tickets, and you probably got in for free. And they deserve to be there and have fun and act how they want.”

So that's why my co-worker Eddie is a genius. Having commiserated about the talkative nature of the crowd at Band Of Horses, he had this brilliant idea: Require people to answer correctly three questions about the band they are about to see, or they can't go in. I know, I know, strict, right? Well, whatever. If you can't name the band's first album or their hometown–or a single song aside from the one that somehow magically made its way to the radio–then you should probably just go to the bar next door. However, I realize this might be destructive to the process of the band earning a bigger fanbase, and some of these people who only know a song or two might fall in love, and then become diehard fans (who go to sing and dance, not chat it up). We need more of these people, so I don't want to discourage them. So then Eddie took it a step further–maybe the venues could have different sections for different levels of fans. Instead of dividing into orchestra seats and general admission, why not “owns more than two albums” and “just heard one song playing in the background at Hollister.” Then at least people who truly love the bands and want to be part of the live experience could have a little separation from the ones who never learned any manners.

I realize none of this is likely to ever happen, and I'm going to have to continue to bitch about disrespectful crowds or just get over it and not worry about what other people are doing (I should probably work on the latter, but hey, no one's perfect). That said, though, next time you are looking for a “good time” out with your friends, notice a band is coming to town and don't really know anything about them other than they were the ones who played the song during the makeout scene in the latest Michael Cera movie, maybe you should just take some quarters to the jukebox at Buffalo Wild Wings. Seriously. Everyone will be happier.

Oh, and for the record, the bands aren't into your conversations, either. No matter how important you think what you're saying is. Take it from Wilco's Jeff Tweedy, the daddy of 'em all: