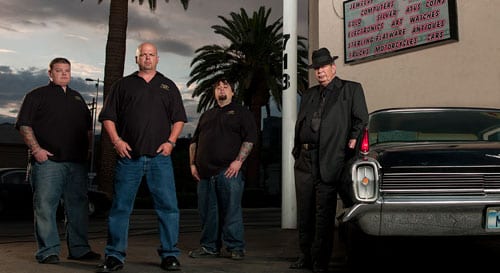 Like most other red-blooded Americans, I love Pawn Stars. If you've never watched the show, here's the premise: People bring (increasingly ridiculous and/or super-duper expensive) stuff into a family-run 24-hour pawn shop in Las Vegas, and they either buy it or don't buy it. Most simple premise ever, yet it never gets boring. Case in point: On last week's episode, a face extremely familiar to AP readers showed up.

I definitely had to pause my DVR and rewind to make sure I was really watching the singer of A Day To Remember haggle with Rick from Pawn Stars over a beat-up four-string guitar, and then I just sat back and enjoyed watching AP's world slam into that of television yet again. Here are my top five favorite examples of this happening in recent years:

Before LA Ink, there was Inked, a show essentially about the same thing but with a slightly less annoying receptionist. And one day back in 2006, who pops in but Jeph Howard, bassist of the Used, who requests a tattoo of a severed unicorn head (complete with gold tooth) for his left thigh. And as you can see below, the customer is always right.

Before the Green Album launched the band back into superstardom, Weezer's members had fallen from the public eye a bit. That is, until Jay Leno came knocking on drummer Pat Wilson's door back in 2000 and got him to dress up as the King himself, Elvis Presley.

Before Zack Merrick and his abs became household names among pop-punk lovers, he found himself on MTV dating show Exposed, trying to win the heart of some random girl who asked him if he considered her an “open wound.” The month after this aired, So Wrong, It's Right came out, All Time Low blew up and Zack probably never even thought about this girl again.

One of the best pranks ever was when Justin Pearson from the Locust/Some Girls got himself and three of his friends on the Jerry Springer show back in 1999 with some cock-and-bull story about roommates sleeping with each other. The premise was paper-thin (and can be read about in full here), but you really have to watch the whole thing to understand how wild this was. JER-RY! JER-RY!

It's Gerard Way. From My Chemical Romance. Popping out of a gigantic birthday cake and singing “Happy Birthday” to a (most likely spoiled rotten) 16-year-old girl. This makes my brain explode every time I watch it.