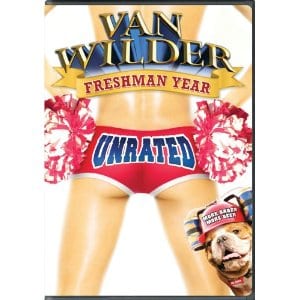 In the movie National Lampoon’s Van Wilder, they say that Van didn't come out of his shell until mid-sophomore year. If this were the case, how were they able to make a straight-to-DVD movie about his freshman year where he is the cool Van seen in the first movie? —Don K., Buffalo NY

I can’t tell you how my restless nights I’ve spent positing theories about exactly why Van Wilder is Van Wilder. It had previously been held that he was a case of what creationists call “irreducible complexity,” meaning if one piece was missing, the entire unit could not function, therefore implying in the original movie that Van Wider simply was and did not “come to be.” I am certain that when Walt Becker directed it in 2002, he had no idea that such profound evidence of Van’s evolution (Van Wilder: Freshman Year) would surface seven years later and blow a hole in the Intelligent Design theory attributed to the man himself. Just as Darwin had exposed the folly of paleontologists prior to his publication of On The Origin Of Species, so had Harvey Glazer changed the face of Van Wilder as we thought we had known him prior to 2009's Van Wilder: Freshman Year.