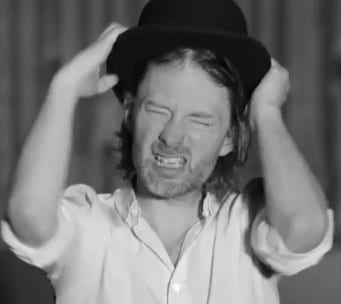 I thought I was being so clever.

This story transpired during a much simpler time: Jonny Craig had yet to check into detox, Japan was in exactly the same spot as the day before and Sammi had just masterfully taken the upper-hand, leaving Ronnie alone in the Jersey Shore house—a shell of an orange man. This was four weeks ago today.

We were all expecting Radiohead to release their long-awaited album, The King Of Limbs, on Saturday, but those cheeky Brits decided to have a piss and put it up for download a day early.

Me being the pseudo-intellectual man-child I am, I was naturally stoked.

I plopped down my digital dollars and immediately started to play it at my desk at work. After one play, I was left unimpressed, confused and nine precious dollars poorer. But Radiohead have a history of taking a while to hit me just right.

In the meantime, they also unveiled the video for “Lotus Flower,” which featured nothing except a flailing and hyper-weird Thom Yorke being hyper-weird even by Thom Yorke standards.

I watched it once. Then I was suddenly sick of Radiohead.

So I started listening to what seemed like the polar opposite—mash-up artist Girl Talk—while I got to work on whatever story was the end of the world topic that day. However, I neglected to close out the “Lotus Flower” video, which kept playing silently on repeat over and over in the background.

It was then that I noticed something queer. (Funny how one little comma could have changed the tone of that entire sentence there.)

Thom Yorke’s spastic, off-beat gyrations completely synced up to Girl Talk—no matter what song, no matter what part. It’s true. Ask my intern, as she had to endure every coincidence I stumbled upon.

But it wasn’t until about 6 p.m. EST that day (the timeline here is important) that I discovered how eerily precise the video matched up with one Girl Talk song in particular—“Give Me A Beat” from Feed The Animals.

I quickly found some bootleg software to rip the video off YouTube, fumbled through iMovie and created my own mash-up, which I promptly threw on my Facebook. I sensed I was onto something great, and I estimated I’d be an internet sensation by Monday. I even went out of my way to send the link to a bunch of reputable pop culture sites.

But when Monday came along, I saw that those pop culture sites had all posted a mash-up clip of the Radiohead video—but not mine. Turns out someone else decided to edit the video down to match up with Beyonce’s “Single Ladies.”

And that wasn’t all. Dozens and then hundreds more videos just like it were posted—enough that entire blogs were set up dedicated to collecting and ranking them all.

I really thought mine would stand above the rest, considering it was literally the unedited video placed beneath one unedited song (granted, one Girl Talk song is like 40). To me, it was about discovering a phenomenon like the Wizard Of Oz/Dark Side Of The Moon thing, except that it actually worked.

What did bother me was that when they all ranked the Beyonce version within the top two, most writers always said, “And here’s the mash-up that started it all…”

For the first time, I understood what it’s like to be a Go-Bot. (Go-Bot toys were released five months before Transformers, but Michael Bay doesn’t give a jump-cut about Go-Bots.) I had no idea the Beyonce version even existed when I made mine, and it didn't exist when I started. But that will never matter. Because the collective internet unconsciousness will always believe the Beyonce video was the pioneer. It even got posted on FunnyorDie.com, which may or may not be a dream of mine. (May.)

What’s the point here? I suppose it’s that in this age of 24/7 news cycles, separate waves of leaked Vanessa Hudgens n00dz and attentions that don’t span a paper clip: if you think you have a good idea—do it. Now. Do it 12 minutes ago. Because someone else out there with more free time, better technology and more Twitter followers is going to attempt to beat you to it. Daydreaming about future success is a luxury that’s been stripped of us.

And you have to be creative in how you present your work to the world, since all of us have the ability to completely cut someone or some topic out of our lives with one click of a box on Facebook. You almost have to trick people into giving you a shot.

Which is the real point here. Was this whole blog just a device to get you to watch my video? No. But I bet you watched it above.

Maybe I'm clever after all.