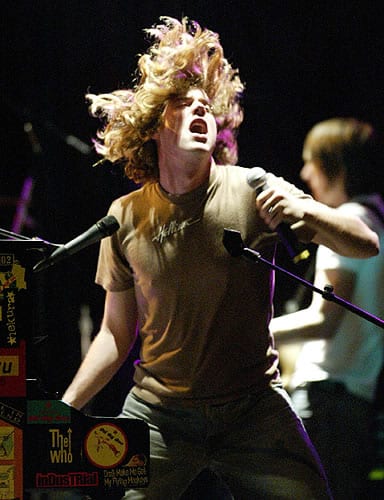 In June, I was fortunate enough to travel to Los Angeles and Orange County to interview Something Corporate for AP's next cover story. While chatting with Andrew McMahon, I learned we had a couple things in common: 1) we both love Hendrick's gin & tonics (thanks, Andrew, for introducing me to my favorite summer-time drink ever) and 2) we are both facing our 10-year high school reunions this summer. (Woo class of 2000!)

Anyway, Andrew and I got to chatting a little bit about the things people worry about when facing classmates that only remember us as our much younger, teenage selves. (Scary thought, I know, and in interest of full disclosure, I'm missing mine, which is back in Nebraska this coming weekend.) And while Andrew's probably got one of the greatest "look what I've done in the past 10 years" stories, what with two successful bands and that whole beating cancer thing, he's not sure if he's going back to his, either. But, if he did, there'd be a good chance he'd have to see Jordan, the star from Something Corporate's breakout single, "If You C Jordan." Yes, Jordan is his real name, and yes, he really wanted to fight Andrew down on the beach after graduation. Ten years later, Andrew reflects on this song and how it came about. But first, the video, for your viewing pleasure:

So, I’m sure you get the gist from the video, but some kid named Jordan, who Andrew went to school with, wanted to fight him over some girl, and it all culminated after graduation, and well, I’ll let him tell the story, 10 years later:

ME: You mentioned briefly that your 10-year high school reunion is coming up. I thought that was interesting in the context of “If You C Jordan.”
ANDREW McMAHON:I don’t know if I’m going to go to my 10-year high school reunion; and I would imagine that we’re all grownups and nothing would happen. I never made a point to apologize for [the song] in one sense, because I felt like it was pretty fair at the time. But did I expect it to be what it was? No. We kept that song off the record. I’m going to tell you a story… It was this thing that happened when we were putting together the Audioboxer EP. We had two songs written in 6/8 [time]. Which is essentially a swing; a waltz-y time signature. Two rock songs in 6/8, and this was in 2000. And one of the songs was called “If I Were A Terrorist, I’d Bomb The Graduation.” And it was this hysterical song, with obviously none of what happened on Sept. 11 having happened at that point. But it and “Jordan” were so similar because they were these tongue-in-cheek rock ’n’ roll 6/8 numbers. But “Terrorist” was the better of the two songs. And so we were like, “Let’s get rid of this ‘Jordan’ tune on the EP, because whatever, no big deal, we’ll get it out. It’s gonna come out as kind of just this no big deal sort of introduction to the bands and fans at Drive-Thru.” And the idea was that we would sandbag the other tune for the full-length because it was the better of the two songs, and even funnier. Fast-forward: the Audioboxer EP came out in September of 2001. If we had put ["Terrorist"] on the record, the trajectory of the band would’ve changed entirely. The album would’ve been shelved, there would’ve been a bad taste in everyone’s mouth, and it would’ve been horrible.

So instead, everyone only heard “If You C Jordan.”
And this was [a song about] some childish shit that happened after my high school graduation. It pretty much boiled down to a fight over a girl, and me not being a dude that rocks the machismo thing, I spent a summer sort of hearing about how I was going to get my ass kicked. It just tells the story. I was never a fighter, and that was never my thing, and so when this almost came to blows in a parking lot, I sort of pleaded no contest and was like, “Go ahead and hit me.” And didn’t get hit, needless to say. But it was really just a disturbing experience for me because it seemed so silly. So instead of fighting with my fists, I fought with my words.

So did you get the last laugh?
I did and I didn’t. If you know me as a person and if you know my catalog of music, I’d say quite the contrary of that song, most of it is about love or finding positivity in hard spots. There is a part of me that really regrets the fact that that song ever became what it did because of that. It came from a really real place, so in that sense I never really completely regretted it. It was very honest at the time, and I felt justified. But I never wanted that to enter the public consciousness. I never thought it would. And for that, I truly really am sorry. Because I thought it would be this funny thing—again you’re processing it as, “I’m 17, and when I get mad I write some silly song and my band go and play it.” It’s not like I write it and think, “Oh, this is going to get played on the radio.” That wasn’t even the ambition for that EP.

That was pretty much the only bit of controversy I had my whole [time in] high school. And it happened the night of my graduation. I think that’s why it affected me so much and why I put it in that song. I’d gone through all of high school, not as a fly on the wall, but definitely just trying to leave relatively unscathed. When I felt too exposed, I hid, like a lot of kids. I definitely stepped out in certain respects, but in others, I did want to be a fly on the wall. So when the biggest drama of my entire experience ended up being something that happened at my high school grad night, and then yeah, this whole thing developed out of an argument essentially over a girl. And it ruined—not ruined, but it really became the staple of my summer, was this guy is hunting for me, [people would say,] “He’s looking for you and he’s going to beat your ass,” and he’s approaching all my friends and saying stuff, and here I am, just chilling, trying to get my summer underway, and everywhere I go, I’m having people be like, “You’re going to get your ass kicked?” And it’s like, “For what?” And we were the big men rolling around, we just graduated, everyone’s getting ready to go off to [college], and you’re at parties and seeing all your friends, and I’m being told not to go to this place or that place. And meanwhile, I’m this 120-pound kid going, “Who wants to fight me?” You could pin just about anybody against me and they’re going to win, unless I fly into a rage and then… [Laughs.]

Were names changed for privacy?
[Shakes head.] And so I’ve heard about it over the course of time. And some people laugh and some people think it’s really shitty what I did. I’ll defend myself in the sense that if I had written or painted a picture that was different than what had actually happened, if I tried to glorify my own position in it, but I didn’t. I just said it. That’s about the most literal song I’ve ever penned in my entire life. I think it was the quickest song I’ve ever written in my entire life. I wrote it that night. I came home from the beach where I was supposedly going to meet my doom and found it all to be a show of just this weird, macho thing that I had never really ever experienced in my whole life. I was disgusted, and I wrote a song about just being fucking disgusted. But at the core of the character involved, he’s a good person and I know that, and he’s gone on to do good things, and I think that I’ve probably in a way that I’ve never anticipated made him really regret that, and in that sense, I’ll sort of always have a little bit of guilt underlying there.

As to what will happen if I go to the 10-year reunion, my money’s on probably nothing. It will probably just be uncomfortable, which is probably the reason I won’t go. I don’t love the idea of being a “figure.” [Laughs.] And the reality of most of my success being fairly underground, it never really has been a thing. I’ll get it in the airport here and there… Every couple of days I might be someplace and people will come up [who recognize me]. But those are the people who know my music. If someone comes up to me, chances are they really know me. It’s never been a fame thing. But you go into a place where you’re notorious—your old high school—I would just feel like I’d pry be as self-conscious at the 10-year reunion as I was for all of high school. And I guess we’re probably all thinking the same thing. alt

So there you have it—even frontmen spend a little bit of time thinking about their high school reunions. I’m not feeling so bad about worrying about mine now. And if you want to read the rest of the Something Corporate story, don’t forget to pick up AP 266 when it goes on sale August 3. My family and teachers will thank you for helping me be a somewhat productive member of society 10 years after I graduated high school…