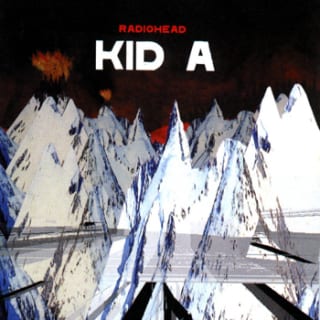 I was a disgruntled record store employee/recent college graduate when Kid A came out.

If you were like me and an emotionally disenfranchised teenager when “Creep” hit MTV in 1993, you’re picking up what I’m putting down here. I liked Radiohead’s debut, Pablo Honey; I loved their sophomore effort, The Bends; and if OK Computer had been a cute philosophy major with bangs and thick glasses, I would have stalked it. So I was really hoping the long-awaited Kid A would contain the next anti-establishment anthem to which I could base my scattershot angst around.

A few weeks before its release, “Optimistic” started to surface on radio. I loved the shit out of it. I think it was about fish, but I didn’t care. Radiohead make fish cool. It sounded a little like “Paranoid Android” but darker. And that’s exactly what I wanted (short of a cute philosophy major with bangs and thick glasses).

But when I finally got to unwrap the CD the day of its release (#thingsimissaboutthe90s), I was devastated. “Optimistic” was the only song I could tolerate. I frantically skipped from track to track looking for something—anything—that would vacillate from muted verse to crashing chorus. Or anything that had guitar. Or a lyric I could understand. Instead, I was greeted with what sounded to me like blips, bleeps and straight-up incomprehensible British babbling.

A customer came into the record store looking for it and I told him to reconsider and instead recommended When Incubus Attacks Vol. 1.

Man, I really hope that guy got around to listening to Kid A…

Turns out that (sorta like Jacob on Lost) the album can’t be heard by just anyone—not the right way, at least—unless it wants to present itself to you. And then when it does, you're not even really sure what just happened.

I don’t remember when or exactly where I was living, but I know it was late at night. I was sitting alone in my darkened room, put on a bulky pair of studio headphones and started Kid A from the beginning. I suddenly understood everyone who loves Pink Floyd. I don’t care what Natalie Portman says: the Shins could never change your life in any way near the way Radiohead did for me that night.

Kid A immediately wasn’t an album; more like a journey. Maybe it was the psychotropic drugs (sorry, mom). But it felt like floating in the ocean and being guided by undulating waves. Each song is layered with so many miniscule details that ebb and flow in the background, and then the background gradually becomes the foreground, and some seemingly trivial effect that starts around 30 seconds in becomes the primary melody two minutes later. I’m confident in saying no other album (aside from maybe Paris Hilton’s) has ever had me in tears by the end.

This week marks a decade that the world has had Kid A. And I’m consistently shocked when I hear anyone tell me they don’t like it. I guess what I’m getting at with all this hyperbole is that if you’re one of those people, you have to give it another shot. Maybe not today. Not while you’re driving. Definitely not on in the background as you do algebra homework. In fact, don’t even plan to listen to it. Wait for it to tell you when. Because Kid A is smarter than all of us. It’ll know what to do.

I'm not the only one. In honor of the album's anniversary, we got thoughts about it from members of Circa Survive, Manchester Orchestra, Every Time I Die, Chiodos and more.