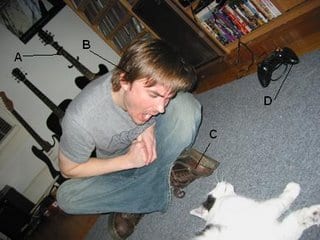 There's been a lot of talk lately.

While, yes, it is true that I got a haircut, rumors have been swirling about the AP blogosphere with unsubstantiated claims that I bite (or have previouslyengaged in biting) the heads off of cats.

I'd just like to respond to the flood of e-mails (three) I've received from readers who were concerned that I was eating cat(s).

This is the photo in question:

First of all, this picture is crazy old.

When this was taken, the following bands didn't exist yet: Panic At The Disco, Cobra Starship, Cute Is What We Aim For and (+44).

Please refer to the facts noted:

B: I still had longish hair. And my haircut was even brought up in the very blog that accused me of these heinous acts.

C: Look at those shoes. I've got a girlfriend now who would never put up with that kind of shit.

D: That's an Xbox controller. Not an Xbox 360 controller. Admittedly, I typically can't afford to keep up with breaking technology, but if I was still playing an old-school Xbox at this point, I might as well be playing a Sega Dreamcast or with a bunch of sticks I found in my parking lot.

And perhaps the best proof of all: A blurry, hastily taken photo of me and my cat from three minutes ago.

A: My cat very much alive with her head intact.


So the moral of this story is not to believe everything you read in certain blogs that have stooped to levels of unthinkable disgrace.

Also, that particular staffer would like for you to believe that he is the savior of all puppies great and small because of this picture:

But the truth is that he severely Photoshopped that image.

This is the ACTUAL photograph:

And a little of Heidi Montag.

Now whose side are you on?