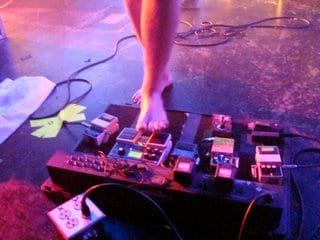 there seem to be two types of new musicians that hit me up- whether via myspace or in person:

1) the type that wants me to hear their demos
or

2) the type that wants me to tell them how to make it as a musician
the question is this: what is "it"?
yeah, it sounds like a Clinton deposition ("what IS the meaning of IT?")
so i'm going to say this to everyone so i may not have to repeat it again in a crowded club during the third opening act's set and blow out my voice
just keep doing it yourself for as long as it makes sense
i know, i know…"DIY" is such a thrown around, often-used, often-abused term…but it's true, true, true
if you're a musician in a new band- unsigned especially- you have to get a couple of things to shine thru those rose-tinted "we're gonna sell a million records and be as big as Zeppelin" glasses you've been wearing pretty fast:
1) it's no longer about how many records you sell. it's about how much money you make at selling the ones you do sell
soundscans and that entire generation of determining a band's worthiness to live by a sales figure is out the door (and not soon enough.) who cares if you sell 70,000 units on a record label if you'll never see a penny for any of it past that initial advance you got? what the hell is the point? (which goes to a future post i'll make- you may not even need a record label anymore either. set your own label up and keep everything in-house or hire independent contractors to do your marketing and publicity. how is this possible to even consider? because retailers are becoming less and less useful to you as a band. more later on that..)
but- back to my point- if you sell 30,000 records on your own, directly to your fans, and you can quit your day job and have some money in the bank for the upcoming tour, fixing the van or for the next studio time- isn't that the point?
because it sure is now.
there's no one in the industry to impress anymore. it's not about showing how big you are. it's about showing how smart you are.
and- why turn over your work to someone else to own and that you'll only end up fighting with forever to get the rights back to, and, at the same time, end up being indentured to financially just as long?
2) merch is your game, man. don't blow it.
there's a standard rule of thumb in business when you're dealing with customers, and, in your case, your fans: your best customers are your current ones and the second best customers are the ones you recently lost (figuring they'll be the easiest to get to come back and try you out again.)
your fans are dedicated to you. they love you. they get what you're about and they want to own everything you create. some of them are going to be asses and download all of your music for free and not buy much at all. i don't think those people are real fans. they're just lazy. kinda like those friends that come over to your party and don't bring anything. they're just moochers. so don't work for them- work for the ones that own two of your shirts, the ones that bought your pins, all of your stickers, and will buy the limited-edition CD jewel-cased packaging you did when you reissued your first few EPs together as one album. these fans will keep you out of debt, gang, so treat them like gold.Â
figure out how to treat them like gold.
and 3) digital-only releases are the way to go. keep the hard-cased CDs around for special-packaging. if you really want to create an actual CD to hand out, make it special or keep it cheap. you got two ways to go on that. if you're just trying to get your name out at first- then either go digital-download card or a cheap CD package. past that, once you get a fan-base of a decent size built up, then start creating limited-edition CD packages for your real fans and sell them at your merch booth, but still release your stuff, on your own, digitally, for the world to discover.
past all of that- it's all about knowing how to market yourself on the internet and guerilla-marketing on the street.
it's the wild west right now in the music business so there are no bad ideas.
no one knows what the fuck they're doing and that's the fun part.
i've got more thoughts and i'll share them in future postings, def.
thiago's look at me pissed off because i haven't played with him tonight. he's got his rope in his mouth and he's whining…
typical boy.