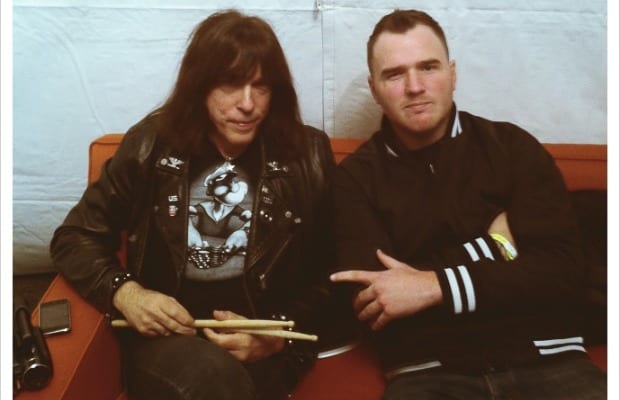 When we first put the term “Pop Punk’s Not Dead” on the back of an NFG t-shirt, a lot of people thought it was a spoof on the Exploited's “Punk’s Not Dead.” Sure, it may have spawned from that a little, but we never looked into the full meaning behind their use of the term. To us, ours stands on its own with its own meaning.

When we started our band over 14 years ago, we never expected that we would go as far as we have. In 1997, playing our brand of pop-punk was just a fun weekend activity. We didn't really fit in; we were the “freaks” at our high schools. The band was our escape and the local scene was the only place where we felt we belonged. However by the early 2000's, pop-punk music—including NFG—had gone mainstream. There were bands popping up everywhere and getting very successful very fast. Some were great and seemed genuine; others seemed to be cashing in. Regardless, it was a great thing. We were fully enjoying all the attention. It was actually refreshing to see this kind of music on MTV and hear pop-punk on the radio. Before that, it was just a bunch of Eddie Vedder rip-offs dominating the airwaves, and we were glad to be a part of something different that seemed to be taking over.

The downfall to a style of music getting so big so fast is that the record labels see dollar signs. They were signing anything and everything wearing cargo shorts and spiked hair that could jump up and down with a guitar. It all became a trend. That's what pop-punk was to a lot of people: a big fad that would go away. I don't blame those people, though—I blame the bands. Because what happened? As soon as the mainstream was done and over with the “pop-punk” thing, a lot of the bands that fit the bill started morphing like chameleons to whatever was next. Changing up their sound and maybe their style to be what they saw as relevant. Other bands just broke up. Maybe it made sense business-wise for some of them. To us, it just reaffirmed to the doubters the opinion that pop-punk—the reason anything and everything good had ever happened to us—was something that could be disposed of so easily.

For the next six years after the pop-punk gold rush, we kept making our records and touring just like we always had. Our fans kept showing up, too! Sure, the shows weren't always as big, but that didn't matter. In fact, now it meant even more, because the fans that came to see us really wanted to be there. [They didn’t come] to fit in or because some big promotion was telling them they had to go. They had a personal attachment to our songs and wanted to share the night with their peers and people that made them feel they belong.

So if people are still supporting us, then why do we want to spread the word that “Pop-Punk’s Not Dead”? It mostly stemmed from comments I would hear or even see posted on the internet, like, “People still listen to pop-punk?” or “I used to love pop-punk, but then I grew up.” The out-of-sight, out-of-mind mentality is what has been trying to kill our genre of music. This isn't a dead genre, and just because there isn't a song on the radio to clarify that shouldn't matter. Bands don't have to have gold or platinum albums to prove their worth. That kind of success isn't a bad thing, but pop-punk is so much more than that.

This style of music has been around long before NFG and long before the mainstream ever gave a crap about it. Pop-punk means something to a lot of people and to me, having success as a band in our genre is about longevity, touring a lot and staying true to your fans. It's about us putting our lives on a plate for our fans to take what they want and not jeopardizing our integrity for any reason.

What I’m trying to get across is that we would play our music, this style, even if it led us back to 15 people in a basement somewhere. I just want to explain where this pride comes from. I can't lie—I haven't always been comfortable with labels. I've argued before that we were more than pop-punk, but honestly, I'm over it. Our fans define us. No matter what we've been through, pop-punk fans have never abandoned us. So we will carry the flag 'til the end. Yeah it might sound juvenile to some, but maybe those people never heard “I Don't Wanna Grow Up” by the Descendents.

After our “Pop-Punk’s Not Dead” alma mater took hold with our fans, we wanted to bring it to life. It's not just a T-shirt anymore. Now it's a tour. We've picked four other new and current bands who share our passion to come on the road with us, bands who are proud of the genre. So here it is: The “Pop-Punk’s Not Dead” Tour. The music is still alive and thriving. Everyone coming out to this tour and singing along will serve as a voice. A voice saying, “You may have tried to sweep our music under the rug or not take it seriously, but we do. This music might not always be popular, but it's valid and it means something to me whether you get it or not.”