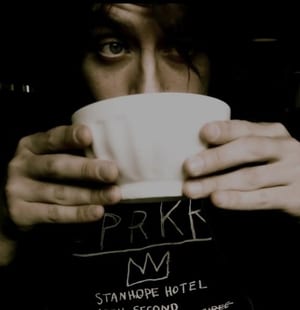 In the time between recording a new record and releasing it, many artists find that they go through a series of conflicting emotions, regarding their freshly recorded material.  When we first recorded Full Collapse, I remember feeling a lot of regret that the record didn't, in any real way, reflect the chaotic energy of our live shows of that era. The vocals seemed too loud to me and I hated the fact that there were any effects used on any instruments. I had romantic notions of keeping Thursday very pure and unadulterated—something akin to an anglophile Fugazi. I terrorized our producer, Sal Villanueva, and our mix engineer (also studio owner), Tim Gilles. Luckily, they were able to distract and placate me until the record was finished and there was nothing I could do about it.

Then there was a period of about four months before Victory Records released it in April 2001. That time period for me was spent listening to the record repeatedly and trying to figure out what to do about this record that didn't sound anything like the DIY, basement-bred, post-hardcore band that I always took for granted being in. I kept trying to find things to like about it. Yet every time that I played it for a friend or acquaintance, they would freak out that the record was “so fresh sounding”, that it was “going to change everything” and all manner of hyperbole about how incredible it was.

When it was finally released, it was reviewed modestly and sold modestly.  My thoughts on the record seemed to have been confirmed. It still felt like it was lacking. It honestly wasn't until that winter—when the record mysteriously turned into a slow-burning hit—that I saw what my friends were talking about and understood why Sal and Tim recorded and mixed the record the way that they did. They were looking to temper the band's natural instinct towards chaos with space and beauty and actually let people hear the great parts of the songs that we wrote. Suddenly, while on stage in front of thousands of kids a day– who were all screaming these songs back at me—I felt the power of that record.

Now, almost 10 years to the day since we released Full Collapse, we're about to release a new record, called No Devolución. This time I'm experiencing a phenomenon that is the opposite of what I felt before Full Collapse. I'm so pleased and gratified to have the record turn out so beautifully, so much better than my expectations, that I'm actually dreading its release date. Because I know this record isn't Full Collapse and, mostly, that's what people want from Thursday. This record certainly won't inspire stage dives and massive sing-alongs. And I can't deny the power of those shared experiences. Some of the greatest moments of my life are when I've been on stage and felt myself truly disappear into a thousand other voices, when I've realized that those songs were no longer mine: they were the kids' who were singing them and everyone in that room experienced a collective catharsis and joy from being there TOGETHER. Being involved in so many lives, at such wonderful times, is a feeling that I've never felt in any other situation and I wouldn't trade that for anything.

Unfortunately, I'm not a kid anymore and I don't think in the same ways that I used to. I don't push the band to go faster, use stranger time signatures or thrash harder. I write songs that turn inward now. Songs that rely on subtlety. Songs that are meant for headphones and car stereos. Songs that are experienced by one person at a time. Even when these songs are played in front of a crowd, everyone in the room will be listening to them alone.

Does that make sense? Have you ever been in a crowd where everyone else disappeared while you watched the band and you felt completely alone with the band? It's a funny thing. Sometimes it's powerful. Sometimes it's totally alienating. I don't know how it will be for us until we've been out there doing it for a good six months. I guess I don't want to let go of the record yet. I don't want everyone else to have their say about what they think it's supposed to be. I just want it to be a little jewelry box full of love notes and old pictures. Just for a little bit longer.

I remember being in Australia with the Mars Volta as they were getting ready to release Frances The Mute and they were talking about the best months in any band's life: the months between recording and releasing a record. In those months, they said, the record is yours. It was like a little gift to listen to and be proud of… And then after that, it never sounds the same. At that point, it is the people's record and you have no more right to it than anyone. At the time, I remember thinking they had strange, professorial views on the subject and not really giving it much thought. Now, I find myself completely in agreement with every idea they put forth that day.

For now, I'll enjoy this record for what it is: a love letter to the subject of devotion. In two weeks, I'll give it over to everyone to dissect, critique and love or hate. I won't be sad about losing it. I won't try and control what it becomes in a live setting. I probably won't listen to it much anymore. Because that's when we start dreaming of the next record.

Geoff Rickly is the lead singer of Thursday. He's also a record producer  responsible for records by My Chemical Romance and the Blackout Pact. Before all that, he threw DIY shows in his basement in New Brunswick, New Jersey. He's always tired and drinks too much coffee.