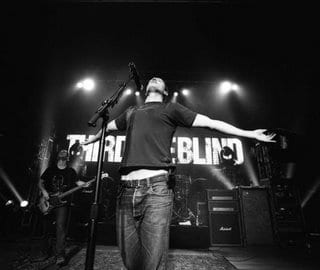 The world is now a different place. Soundgarden got back together without Chris Cornell, which is the grunge equivalent of Double Stuf Oreos without the Double Stuf. Craig Owens debuted his 36th side-project, Isles & Glaciers, at AP's South By Southwest party. And I'm not even gonna get into the mind-boggling changes that went on over the past two episodes of Lost.

But instead of focusing on current and potentially relevant goings-on with this particular blog, I'm gonna take it back to October 2008-era Tim Karan blogs.

What can I say? I'm devastatingly interesting. 400 Twitter followers can't be wrong.

But here's the pretense under which I'll provide my masturbatory account of the past couple weeks: I went to the aforementioned South By Southwest festival in Austin, Texas. Even if you followed my informative and occasionally drunken updates from the road, I figured I'd let you guys know how it went in increments larger than 140 characters.


So here's the thing about SXSW.

Although it's a four-day booze and music fest for most of the people stumbling to the nearest Fake Problems performance, if you're an industry-type (which I'm told I'm supposed to be), SXSW isn't really that different from an orthodontists convention at the Atlantic City Sheraton And Conference Center. But instead of talking about synergy next to exhibits on cutting edge bonding adhesives, we go talk about synergy next to a Jaguar Love show.

This was actually my first time at South By Southwest, and let me tell ya: The first thing anyone thinking of going needs is two gratuitously padded pairs of comfortable shoes. Everybody warned me ahead of time, but nobody could've prepared me for the searing pain of four days on your feet. By Day 2, I'd worn a hole in the bottom of my left shoe like I was a damn Charles Dickens character.

I felt like I was dying from the feet up.

But I still managed to see and do some pretty sweet stuff.

HANDS-DOWN BEST REAL SHOW: Manchester Orchestra @ Radio Room Patio.
If you pull out your issue of AP 250 and flip to page 109, you'll see the lead review I wrote on Manchester's upcoming album. I won't ruin the surprise for you, but let's just say I like it. Anyway, I was a few rows back for the show, standing on uneven, loose gravel. But it was without a doubt, an amazing set. They played nothing but new songs (of which you'll see I'm quite the fan) and their stage presence was effing insane. Have you ever seen keyboardist Chris Freeman onstage? Dude's playing air guitar, pulling his shirt over his head and smoking the whole time. And, to top it off, the encore was a slowed down, hoed-down version of the theme song from The Fresh Prince.

HANDS-DOWN BEST UNREAL SHOW: Silversun Pickups, Metallica, DJ Shadow @ Stubb's.
First of all, these were three big check marks that had been absent on my list of acts I need to see before the 2012 Armageddon. Now I got 'em all. Metallica playing SXSW is kind of like U2 playing the Baldwin County Strawberry Festival. It was a "secret" show that leaked out the week before the festival, but it was probably the most difficult show to get into. I was able to rely on mover/shaker Scott Heisel to snag us photo passes that didn't allow us to take photos, but did allow us get in. And that was all we needed to maneuver our way straight to the front barricade. Now, I'm one of those guys who refuses to wear earplugs to shows even though I'm almost assured not to have any hearing by the time I'm 33. And I tried it for Metallica. During soundcheck, I literally lost 19% of my brain function. Believe you me. That's a serious amount for me to lose.

We were so close, I got hit with some of James Hetfield's beer.
That's a good, good time right there.


COOLEST SHOW I'D NEVER SEE ANYWHERE ELSE: Right Away, Great Captain! @ St. David's Church
Okay, so this is yet another Manchester Orchestra-related band, since it's frontman Andy Hull's side-project. But if you'd been there, you'd put it on this list too. It was in this little community room in St. David's Church and it was just Andy, a guitar and an amp. He played The Eventually Home from start to finish and told the incredibly complicated backstory behind every song. I was so close, he started to ask me for help with his amp.

MOST UNCOMFORTABLE SHOW: Earlimart @ Central Presyterian Church
Yeah, another church show. But this one took place in a straight up church. Like frontman Aaron Espinoza was set up literally on the altar and the sound guy was up in the choir box. Aaron did the show solo with a sweet multimedia video set-up and tons of bells and whistles that the confused parishioners (who must have gotten free tickets to shows at their church) didn't fully comprehend. But when Espinoza played "Great Heron Gates," with the line, "But Jesus are you really there?," most of those parishioners took their well-dressed toddlers and promptly left. Still, I thought it was an awesome show and one that I'd probably never get to be at in any other situation.

JUST THE WORST SHOW EVER: Third Eye Blind @ Austin Convention Center
Look, I was never on board with Third Eye Blind. When I was a teenager, they were just another radio rock band with hollow-yet-catchy hits on Now That's What I Call Music 43. Then, all of a sudden, thanks to Ryan Ross and a bunch of others, 3eb became instantly influential. I still wasn't convinced, so I went to see them at a show that was recorded for TV. I'm sorry, kiddo, but I immediately knew I wanted to leave. But I couldn't. They were recording it for TV. The lyrics to the new songs are clinically horrible and the when it was over, I felt like I'd just watched a group of music education majors performing "Happiness: A Medley of Hits from 1994" at a mid-level amusement park. Stephen Jenkins thinks he's some sort of pretentious cross between Bono, Jesus Christ and Weird Al Yankovic.

Dude. You're in Third Eye Blind. You don't see the dude from Collective Soul with a Christ complex.


CRAZIEST SHOW EVER OF THE WEEK: The AP Party @ Emo's
Obviously, I'm biased because I want to keep my job. Still, you can't debate the staggering insanity that was the line outside of Emo's for this thing. It stretched about five city blocks at like 10 a.m. That's pretty easily the longest line at this year's festival–although I'm not sure how many people stood in line to see Kanye West. But three stages, a zillion kids, the bands of the AP Tour along with the Used and the first show by Isles & Glaciers… all for free? If you didn't make it, don't fret. I ran around like like the world's fastest emo recording performances for you. We're posting them on the site and some are up already.

The Maine playing "The Way We Talk"

And while I got ya, you should really also check out our cool exclusive videos of performances from bands in unconventional settings. Like:
The Matches on a police vehicle in the middle of the street

Cursive in some office park alcove

We've got plenty more on the way, too. You're gonna wanna see…

All in all, I had a good time at SXSW. I had a few drinks at a place I thought was the Alamo but turned out to be a Taco Bell. And that, my friends, is symptomatic of a good time.