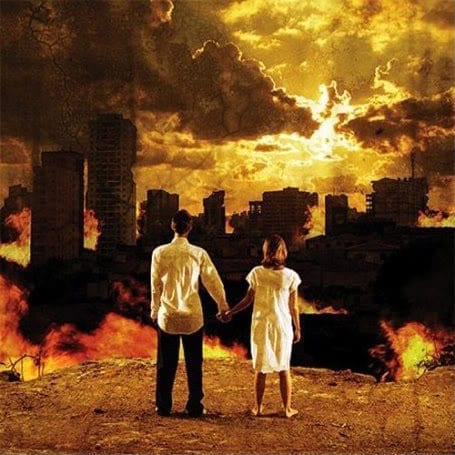 So I couldn't sleep last night.

It's cool, don't worry about me.

I've been really kinda stressed lately and having recurring nightmares about my senior prom date making out with Cartel's Nic Hudson right in front of me. (It's a long story, but as it turns out, more people would care if Nic blogged about it.)

Instead of using my insomnia to complete any of the four sections of the magazine I still need to write or taking care of that four-foot high pile of dirty dishes in my sink, I decided the best use of the hours between 2 a.m. and 5 a.m. would be to find artwork for any of the 229 albums in my iTunes that could not be located automatically. (Rival Schools' United By Fate? Really? Maybe iTunes should look under "M" for "mandatory to own.")

But sifting through my entire music library while Soul Train was on, I started to take notice of some of the album covers I've got in my iTunes since, after all, I really don't ever see artwork anymore thanks to flipping through my iPod and a tragically short attention span.

So I came up with a couple of awards for some of the most noteworthy covers I stumbled across in the night.

1. Cover That Makes Me Most Think Of That Game Twister:
The Promise Ring, Nothing Feels Good

Twister is a game with a large, plastic mat that repressed teenagers used to play as an excuse to brush up against members of the opposite sex. But MySpace has pretty much taken care of all those old formalities.

2. Cover Most Stolen From The Last Scene Of Fight Club:
Scary Kids Scaring Kids, The City Sleeps In Flames

3. Cover That Strangely Depicts What's Going Through My Head At Any Given Moment:
Queens Of The Stone Age, Era Vulgaris

I'm not 100 percent on what this artwork actually means, but one time I had to have my head x-rayed and this picture is actually what was found circulating in my temporal lobe. It was pretty touch and go for a while.

4. Cover That Most Makes Me Feel Funny:
Denali, Denali

5. Cover Of The Only Vinyl LP I Own:
Brand New, Deja Entendu

True, I was tricked into buying this because I thought it was a super-limited edition version, but if I'm gonna own one album (not by the Monkees), then this is the one I want.

6. Cover That Most Makes Me Feel Like My Masculinity Is Being Questioned: Catherine Wheel, Chrome

Nothing like leotards underwater to make things uncomfortable for everyone involved.

7. Cover With Artwork I Would Hang On My Wall And Pass Off As Legitimate Art: mewithoutYou, Brother, Sister

This would make my apartment look less like (as it's been described before) a 9-year-old with no supervision lives there.

8. Cover With A Photo So Cool I Wish I'd Taken It:
Brand New, The Devil And God Are Raging Inside Me

Yeah, I like Brand New covers. It's creepy as h. But it's also probably my favorite album cover of the past two years. Not counting:

9. Cover With A Photo I Probably Would Take:
Rob Crow, Living Well

10. Cover That Most Makes Me Want To Spend The Afternoon Coloring: Sunny Day Real Estate, Diary

I'm sure there's hidden meaning in there, plus this is probably one of my favorite albums ever. But it really kinda makes me wanna buy a box of animal crackers and throw a temper tantrum–I mean different from the temper tantrums I throw at work every other day.

11. Cover That If I Stare At Long Enough, I Get Nauseous:
Samiam, Whatever's Got You Down

12. Cover Depicting Everything I've Ever Wanted To Be:
Ryan Adams, Easy Tiger

Sure, it's almost contrived because of how blatantly staged this candid photo is. But I spent 17 Saturdays last year just trying to hold my cigarette like that.
Plus, I'm contrived and I don't really mind.
It's part of my charm.