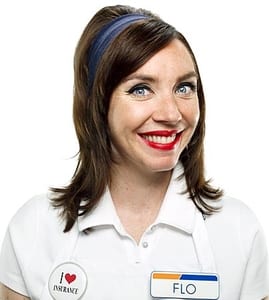 I pay way more attention to TV commercials than I think is healthy for the average American human.

Maybe thatâ€™s because I watch way more TV than the average American human. Whereas most people probably barely notice commercials or fast forward their DVR to make them nothing more than a blur of fake smiles, I can probably mouth every single word â€œFloâ€ says on each Progressive commercialâ€”and thatâ€™s a burden I wouldnâ€™t wish on my worst enemy (and that would be â€œFloâ€ from each Progressive commercial).

Some commercials are tolerable. A select few are good. But most make me scream silently inside by brain all through primetime. Here are the worst 10 (that I could find embeddable videos for).

First of all, insurance commercials are rapidly becoming the bane of my existence. Second of all, I want to kick that blonde kid in the neck when he starts to sing. Sure, the girl from 4E is admittedly crazy hot, but that quickly wears off as soon as Floppy McSwoopcut says, â€œAnd can I get a hot tub.â€ Maybe Iâ€™m taking this whole premise too literally, but I can buy that an insurance agent could appear when someone breaks your window. But how does she have the power to materialize sandwiches and hot tubs? What’s the deductable on that? Cause I only have liability.

Believe me, I get it. The president of the United States â€œsometime in the futureâ€ wouldnâ€™t have come into existence unless some guy standing on a subway platform hadnâ€™t spotted his future wife on the train and used his phone to change his ticket. Thatâ€™s not what bothers me. What bothers me is A) I donâ€™t care what phone or carrier you have, but nobody in the history of ever would be able to login to some public transportation mobile site and change tickets in the span of literally one second. And B) Iâ€™ve had fleeting eye contact with many attractive girls in my life, and even if I did muster the superhuman confidence to scramble onto her train and jump right into the seat next to her, what the hell am I gonna say that wouldnâ€™t end with her pretending to text someone else?

One super-aggravating trend in commercials is creating these â€œTV showsâ€ that you see snippets of in commercials, but have to go to the companyâ€™s website to watch more. Thatâ€™s all gravy, but at least make me not despise the characters. I see the whole Christopher Guest-style mockumentary vibe theyâ€™re going for here, but I canâ€™t make it through this commercial without wanting to call child protective services for those poor fictional children.

Itâ€™s a tried and true method just to take some vintage song (especially one thatâ€™s like fingernails on the chalkboard of my soul) and use the lyrics as a punchline in a commercial. And Iâ€™m all for giving inanimate objects personalities. My first student film was about a chair that couldnâ€™t get anyone to sit on it. Just explain to me why a broom would be attracted to a lawn ornament? This isnâ€™t even the version I really hate. Thereâ€™s another one where the broom is smitten with a rake (which makes sense in this scenario), but another where it falls for a pink bowling ball. Come on, broom. Raise your standards.

Of the new iPhone commercials for the â€œFaceTimeâ€ feature (thereâ€™s one where a girlfriend shows off her pixie haircut and another where a daughter is embarrassed to show her dad her new braces), Iâ€™m usually dizzy the most after this one from 30 seconds of eye-rolling. â€œYou know that thing weâ€™ve been working on for a while now?â€ Geezus. Are we supposed to be surprised when she reveals sheâ€™s pregnant at the end? And her husband couldnâ€™t tell right away when she was being weird? Cause I could tell from the second she asked if he was alone and I know nothing of their personal lives. Come on, man. I understand your wife better than you and I havenâ€™t been trying to knock her up for the past seven months.

I follow what Hyundai and Jeff Bridges are doing here. But, Iâ€™m sorry: If I was test driving any car that had a driver-side door that opened on first try, power locks and a lack of a distinct cat pee aroma, Iâ€™d be raving about that car too. And this ad had me until 21 seconds in when that yuppy asshole and his ladyfriend share a pretentious laugh about having previously spent money on a Mercedes. A Mercedes? And now he’s buying another car? I try not to resort to swearing in my writing, but fuck you, man. Just fuck you. Clearly we have different problems. Now pick out the appropriate shade of beige shorts you wanna wear to the Dave Matthews concert.

4. Progressive “Take A Tour With Flo”

Honestly, I wanted to choose the â€œThereâ€™s no discount for agreeing with meâ€ version, but I couldnâ€™t embed it. So this is a close second due to the just asinine pretense that people (and crazy, Psycho-brand mamaâ€™s boys at that) are taking a tour of the weird Progressive purgatory. Flo has her fans. I get that. But so does Criss Angel.

3. Staples â€œWow! That Really Is A Low Priceâ€

Please stop yelling at me. This particular commercial is playfully poking fun at the original by showing an everyman character (who I swear was on Suddenly Susan or some other sitcom I never watched) being annoyed at the obviously annoying, over-excited Staples customer. But once the annoying guy points out the low price on the very item that the everyman was already looking at, he feels the need to yell at me, too. If I was the manager of that Staples, I would have to politely ask both of these dipshits to shop at Office Depot.

Yeah, if I have to explain why this commercial is annoying, I think you probably need to brush up on the definition of annoying.

Oh, where do I start? This whole series is supremely aggravating. That random middle-parted guy who just follows people around pointing out their assorted methods for saving money. That A.D.D.-riddled camera guy who follows every passing person. Gah. Throw in these utterly unfunny suburban Entourage douchebags (one of whom insists upon wearing the most ludicrous hat since Duckie in Pretty In Pink) and Iâ€™m ready to throw a passing squirrel at my TV. Or do the unthinkableâ€”read a book.