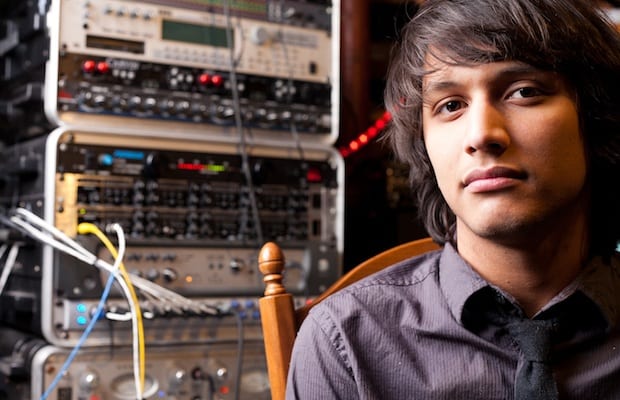 Throughout high school, I always played guitar in hardcore, punk or metal bands. All of my friends were in the heavy music scene, so naturally I was too. I went to hardcore shows almost every weekend. I can't count how many bands I was in before playing keys in the Venetia Fair.

I'm not a big guy. I know I'm not strong. I didn't ever really fight, and the few times I did it didn't work out well for me. Fighting was common in the scene I was in. I understand that people in the hardcore scene take it very seriously. I understand that there is also a level of “macho” that is often upheld by members of the scene. Don't try and tell me there isn't. I will not argue that point. It is a fact. I actually don't care about that. It doesn't bother me. Some of my best friends to this day fit that description. I get it. I've seen plenty of situations where someone that is getting a bit too rowdy at a show gets hit by someone else. While I may not take the same action, I completely understand it and think that sometimes it's necessary. What I don't like is when fights happen for no reason at all. I will never understand why some people ruin a good time for everyone just so they can look tough.

If you've never seen the Venetia Fair before, you should know that we don't take ourselves very seriously at all. We can be pretty offensive on stage, but it's all for fun. Every one of us at some point in the set is flipping off the crowd or spitting water on the people in the front. We don't do it because we legitimately hate the people watching our band. Honestly, you would have to be stupid to actually believe that. Why would we hate the people we are trying to sell our band to? Don't be stupid.

We were on tour last December and had a date in Reno, NV. The promoter of the show had asked us to find some local bands to play with. We found a local band that for the sake of this article I will call “the Curfew Kids.” You will find out why later. This band we personally picked because we saw they had a pretty solid local following and their music was actually pretty good. Plus, I always get excited when we get to play with a heavier band because we don't often get to on tour. We asked them to headline the show, which they agreed to do.

When we arrived at the show, we all introduced ourselves and hung out for a bit. Things were fine. We were informed that the Curfew Kids couldn't headline anymore, because the lead singer had to be home at a certain time because of his curfew. Apparently, he was pretty young. That kind of bummed us out a little bit, but it was fine. We kept our mouths shut and the show went on.

We played in the middle of our tour package, but because of the curfew issue, the headliner on our package went last and “the Curfew Kids” played right after us. We played our set and for the most part I thought it went fairly well. Sure we pissed a few people off, but our show tends to make more fans than lose them. In my experience, our show seems to make more die-hard fans than a normal show does. After our set, I was approached by the guitarist of “the Curfew Kids,” and he asked if I could spare a cable for him to borrow. Of course I let him. It's not uncommon at shows. I always let others use my gear if they have forgotten theirs or if something breaks mid-set.

When “the Curfew Kids” went on, the first thing they did was start bashing our band. They were saying that we disrespected their town and the crowd. They mocked us the entire set, and their fans loved it. When someone from the pit “accidentally” knocked our drummer Chris' kit over I knew that there was going to be some sort of a problem.

After their set was done, we didn't talk to any of them. I feel like it's better to just let things like that go than to cause a scene. Needless to say, I didn't get my cable back. Also Ben's keys had gone missing. We had our suspicions, but weren't about to call anybody out. When the show ended, we were informed by our tour mates that we couldn't unload because the fans and members of “the Curfew Kids” were waiting for us outside of our van. This was almost laughable to me. I've seen that situation so many times. We were not about to go outside and get in a fight because they didn't like my band. There is literally no point in that. Look at my band, do we look like dudes that fight? No, we don't. We're not stupid. I know we would have lost. I am absolutely not writing this to sound tough. I believe the owner of the venue called the cops and they dispersed the scary dudes outside of our van.

Later that week while searching our band's name online, someone had discovered that Ben's missing keys had in fact been stolen by “the Curfew Kids.” They were bragging about it on their Tumblr, saying that they couldn't wait for us to come back so they could break into our van and steal our shit. That's a stupid thing to advertise on the internet.

I guess the whole point of this story is that events like this are why people can have a negative view of the hardcore scene. There's no need for situations like this. When I don't enjoy a band, I simply leave the room. (Some even think that's too disrespectful). To go out of your way and ridicule a band for half-an-hour is childish and stupid. It doesn't make you look cool. It doesn't make your band any better. It makes you look whiny. And when you try to fight the band after you bash them, claiming that the crowd felt that they were disrespected, don't have all your friends wait to jump them. Also, make sure what you are claiming is even true. Guess what, we've been asked by several attendees at that show to play there again. And we will. Please don't steal our shit because we are playing in a band that you don't get. I wish “the Curfew Kids” well with their band because honestly, I don't mind their music. And that's supposed to be what makes fans, right?