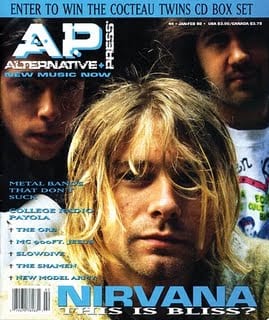 I remember back in early 1992 when we did that cover of AP with Nirvana.

Hell, I believe we were the first national magazine to have them on the cover.

It was an exciting time to be in music.

Over the next decade+, they would have launched a thousand new bands, a few hundred new sounds, and the careers of a whole crap load of music industry employees from journalists to A&R reps to music conference CEOs.

But as with all things in pop culture, there are cycles.

And as soon as we were all getting comfortable, the entire Nirvana-inspired scene spun out of control and we somehow ended up with Nu-Metal by the end of the 90's.

And back to the mold, again.

Ugh, I remember when we did that cover too.

Then out of the ashes of that came a sound that got us in the music business (and us as fans) all excited once again.

Spoken by a New Generation.

That broke the mold.

That, again, would spawn a thousand new bands, hundreds of websites run by hundreds of crazy music fans and a whole crap load of new jobs for music industry workers- from guitar techs to label publicists to indie clothing designers to music site bloggers.

And we all slept good at night.

Until last year at some point.

When it started to get moldy again.

And now here we are.

"What's the new sound going to be?"

Two questions I hear often just about every day.

Screamo is on life-support.

The swoop cut is out.

And Pete shaved his head and grew a beard.

I get it. I understand why we had Dance Music City for 18 months.

Like with the Great Depression when movie-goers wanted to escape, to forget their daily hell of being broke and jobless and worrying how they were going to feed their kids the next day, the great Hollywood Musicals reigned supreme in popular culture.

Everyone just wanted to forget the bull crap. Go out, have fun, sing-a-song, dance-along.

No different to what's been going on in the music scene since late 2008.

But that turntable belt wore out, too.

All standing around, staring at each other, waiting for someone to start dancing first.

But, so far, no one has been willing to lead.

The New Sound of Now.

Or, maybe, the next Nirvana, the next Saves The Day…they're just not together yet.

Or maybe they're still in their bedroom with their Garage Band software polishing up the sound that'll spawn another thousand bands and hundreds of iPad apps and a whole crap load of music industry jobs for people that are broke-assed from being out of work for so long.

(They're getting impatient, believe me. Hurry the fuck up, if you're reading this.)

The time is right.

The air is ripe for Change.

Whenever the country is in the crapper (and, interestingly enough, when there's a Republican in the White House), it tends to create just the right conditions for a New Great Sound to be born.

When Reagan was in the White House, punk rock ruled strong. So many great bands came out of that era that would change the future of music entirely. (Ask Henry Rollins)

Rebellion and Anger towards crap conditions in our country breed great artistry.

Now here we are with a Democrat in the White House, yes, but a very, very crappy (world) economy and a very pissed off artisan crowd.

The words for lyrics are all there.

On a silver platter, practically.

Waiting to be used.

It's the Rich versus the Poor.

Bankers versus the Common Man.

Racism and Bigotry versus Tolerance.

The Far Right versus the Far Left.

The Past versus The Future.

What band is going to be The One.

To come break this mold?