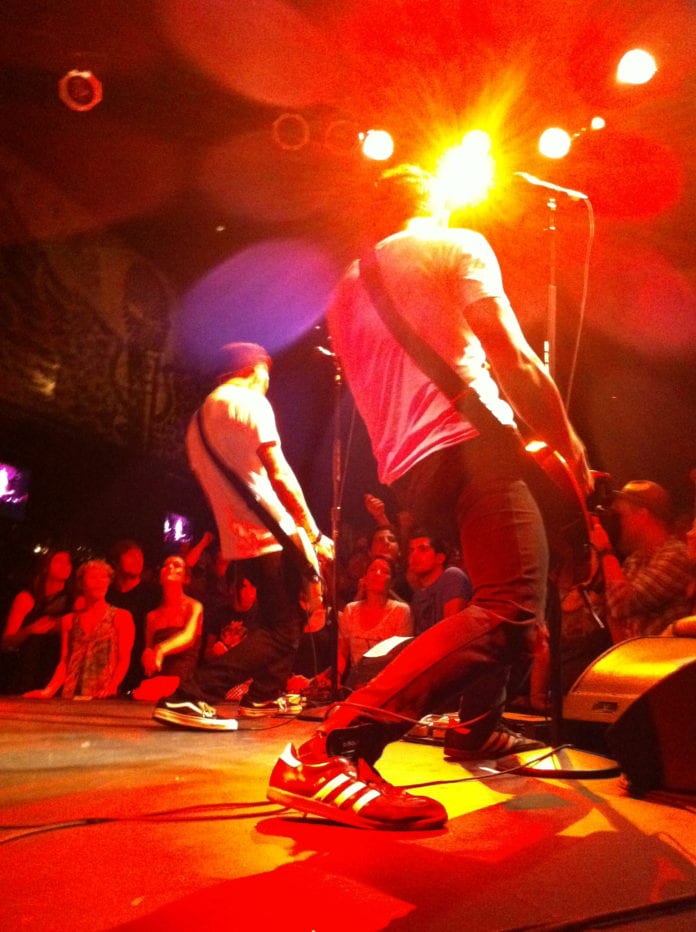 Every band goes through it. At least the ones of note.

Three years ago, you were the big thing, the next thing, the "hot" thing.

You were on Warped Tour playing Main Stage or maybe the Hurley Stage but it didn't matter, your band brought the crowds.

Kevin told you that, too.

You had a tour bus, four crew, your manager just worked it out with your publicist to get you on Leno or Kimmel or whoever had a show that anyone cared about.

Sponsors fought over your band to get you to do signings at their booth.

Most everyone in the band got laid, including the "married" or "committed" ones.

The riches of being a musician, more or less, flowed through, flowed easily into your hands.

Your Wikipedia entry filled up with chart stats and album production notes.

If you were really successful, each member of the band got their own Wiki page too.

Something none of your band mates (those that are still with you) can explain.

That "moment" just slipped by.

It was real, no doubt. But it was fleeting.

"Hot" was not the word being attributed in live reviews about your performances anymore.

"Veterans" was the new term.

"Pros" if you were fortunate enough.

Now it took a lot more door knocking for your manager to get you the kind of access that was being thrown at you three years before.

You were having to elbow your way in.

Your guarantees caused fights between your booking agent and promoters.

You were starting to have to tour with bands that weren't like yours.

Your band thought they had "matured" and were producing "some of the best material of our career."

But the fans, "the kids", weren't buying it like they did before.

You still have a solid fan-base, no doubt.

But there's just not the same amount.

You lost a chunk…where? On the road? During a drunken stupor? Were you an asshole too long to too many fans? Should you have done more twitter updates?

But you're selling less records than when you did when you first signed.

Your guitarist wants you to go "DIY, man…FUCK the labels…"

Your manager is worried about how he'll make his 20% in the future. So he's looking around for new talent.

Sure, your band has your stable crew lifers by your side. Like your ring crew during a boxing match- they got the towels and bandages and the water sponge.

Lately, you've been coming back with more bruises. A bit more bleeding (your bassist from Day One left.)

And now you're standing in the crowd after your set on Warped Tour.

Among "kids" 10 years your junior.

Who are bat-like crazy for some "new" "hot" band.

Who are pulling moves and sounds from records you grew up on.

And you're shaking your head.

"These guys can't even play their instruments!!"

You walk away, three songs into the new band's set.

You want to drink.

"Why the fuck am I doing this…? Maybe I should open that dog rescue.."

You go back to your bus (the one that's causing you to end Warped in debt.)

But before you can finish entering the bus door code, a "kid" of twenty-three comes up to you.

He's got a copy of your first 7" in his hand and a marker.

He tells you how much you influenced him and how much he appreciates your music.

How he listens to your second record every day coming home from work, that 30-minute drive, sometimes driving slower so he can get the whole record in before he pulls into his apartment complex drive.

How he picked up the guitar and how his first band played covers of your songs (he admits they sucked.)

How you're his idol. How nervous he is.

How much he can't wait for new material. Or to see you in a "proper set."

Oh, and how he's got your band logo tattooed on his arm (he shows you).

This is a moment he'll remember for the rest of his life.

Meeting you and telling you that your music meant something.

You cordially sign the 7", take a quick picture for his iPhone, shake his hand, big hug.

He walks away, back turned, reading what you wrote.

And before you can try again to enter in the bus door code, you remembered, again, (AGAIN), "WHY the fuck" you were doing this in the first place.

Don't worry about the "WHAT"…

Remember about the "WHY"…