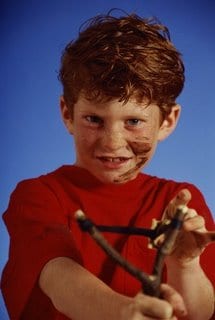 Who the hell are you, anyway?

Are you that big of a douche-bag in everyday life?

I'm just not sure where you get off saying such horrible shit about a musician that you either:

a) met once for a minute after a show

c) never met and don't know anyone who has, even for a minute after a show

We've all seen it happen over and over again.

Someone makes a general post about hearing a band's new record and wanting everyone's thoughts.

Within three responses, some commenter starts the crap: "These guys are assholes. The lead singer should kill himself. Music would be better."

Or something very close to that.

Do you have any idea what your words are doing to that band's morale?

Or maybe that lead singer's self-confidence?

You ever been around an artist of any type for more than five minutes?

They're highly-emotional, sensitive as hell and very in-tune to the world's vibes around them.

Like one of those characters on HEROES, they soak in the world around them and transpose it all back into a piece of art for us regular folk to enjoy.

Sometimes we don't. Sure.

But should it be up to us to tear them apart? As people?

Is that your role in life?

To be such a dick to musicians, to make them feel like such horrible failures in life, that they stop wanting to create art and just crawl into a hole back in their hometown and work at a retail store the rest of their life?

Would that make you happy?

Would you have accomplished your goal this year/month/week?

Because you spouted off some horrible accusations, most of them completely untrue, or, at the very least, blown out of proportion, it causes some band to break up? Or feel like they're shit?

Or some lead singer that you're pissed off at for whatever stupid reason is maybe now thinking to take just a few more of those pills he has to take to not be so depressed all the fucking time?

Because they read what is written online about their band.

And they see that you think they're better off dead than alive.

And you think you're so clever.

That you're so superior.

Because you shit out some bad-assed opinion about an artist then signed off and went back to your video game.

Because when I read your posts online and I see how bitter you are and how much of a jerk you are.

I develop the opinion that you're the one that's the failure.

That you're the one that's the dick.

That you're the one with the shitty career and whose friends can barely tolerate your conceited know-it-all attitude about everything in life.

Or maybe you tried to be a musician and you never got it going anywhere and you're now just jealous as fuck.

Because these artists are actually doing something that you would die yourself to be doing.

To be in their shoes.

And to have people actually…like you.

But, instead, you rule a message board.

For three posts of hate.

Even though you insist that you love music.

But, for some fucked up reason, dude.

The way you "love" music…

It's pretty apparent that…

Instead of liking bands here:

You prefer them here:

While a lot of musicians I know, would prefer to see you like…here:

No, dude, YOU'RE the asshole in all of this.