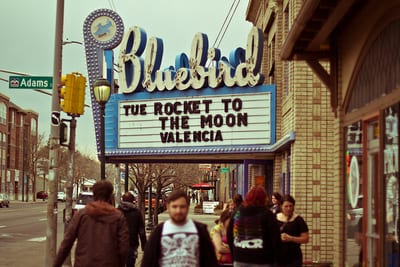 Welcome to the fourth On Your Side Tour photo blog. In this edition I decided to make a bunch of GIF animations. The new name for the blog has been changed to “GIF Me A Break”… a second runner up was “GIF'n It All I've Got.” Enjoy!

On the way to Seattle we saw this car on the highway: the Ass Family. We ended up meeting up with them at a rest stop. They were so nice. The father's name was Mr. Smelly Ass and he was really cool, he let us all pet their dog: Dumb.

Here's a video I took of Mike from Anarbor. We tried really hard to make it his twitter avatar but apparently the people over at twitter don't take kindly to it. A fun fact about Mike: his favorite song of all time is the Caramello™ theme song.

Another video of Anarbor. This is Greg drumming. Look at the girl on the bottom right…. she's insane. Fun fact about Greg: There was a year of his life where he tried to become Mike O'Malley from Global Guts™. He finally stopped when Adam told him there were no results, Mo didn't exist and that regular GUTS™ was better than Global GUTS™ He went into his room which he nicknamed the “Extreme Arena™” and wouldn't leave his bed (a.k.a Aggro Crag™) for a week. He's better now, just don't mention the 1996 Greg “The Spider” Garrity incident to him at a show.

Here he is again. Notice JB scratching Slade's back on the right… in the middle of the set! What a nice guy.

Sometimes Andrew of ARTTM gets bored with the drums. So he decided to play bass for the Seattle show. It got weird because the only song he knows is “Tha Crossroads”  by Bone Thugs-N-Harmony, so they just kept playing that over and over.

This IS an animated GIF…. I tried to catch some movement from Halvo, but since he didn't know how to play “Tha Crossroads” on drums, he just sat there for 45 minutes with this very same expression on his face.

Last time we were in Seattle (Shane and I hitched rides with Motion City Soundtrack and Say Anything and played only acoustic because our van had broken down), Shane was asked to write the lyrics to “The Good Life” on a piece of paper. This time we were shown this awesome tattoo… what an amazing thing. It really does make us feel good when we see that kind of dedication to our music. Thank you so much!

After Seattle, we had a day off to drive to Salt Lake City, UT. George had the great idea to cover his favorite Aerosmith song: “Pink”. We decided to do it super DIY and lo-fi so we did it on his iPhone. Here he is singing his vocal part.

Here's Dan laying down some of the background vocals. Can't wait to show you the final product!

Here's a shot from the back of the venue in Salt Lake City. There were so many awesome mountains and views on the way and surrounding the city but I was driving so much and watching the Season 9 DVDs of “2 Guys A Girl And a Pizza Place” that I bought in Pocatello, ID, so I didn't get to take any more photos than this one. Next time, I'll get more!

A GIF of Peter from Runner Runner's legs. Fun fact about Peter: he once won the Minnesota state Bop-It™ contest and only lost because the judges said “he wiggled it” when he was supposed to “flick it”. He came in second but he's still pretty ashamed of it all these years later. However, he has since dropped the Bop-It™ and picked up the guitar and written some lovely tunes, so we can thank those judges for that!

Here's more footage of Peter, as you can see here, he's the lead screamer for Runner Runner. He also happens to have one of “the chillest backup vocals ever” according to Mike from Anarbor. I can definitely vouch for it… it's pretty chill.

Here's James of Runner Runner. He fell asleep during the acoustic song and was just bobbing back and forth… He quickly woke up when Nick yelled “RE-RUNS OF EARLY EDITION ARE ON TV!!! YOU'RE MISSING IT.” He was pretty bummed when he found out it wasn't on and he had another song left to play… he LOVES that show!

Mike from Anarbor drawing a portrait of JD, if he were in the wild west and had a giant mustache and smoked cigarettes and was very suspicious of things. I think it bears a striking resemblance.

Wapner got super itchy in Iowa City. Fun fact about Wapner: he thinks he coined the phrases “pop a squat”, “I have a bad feeling about this…”, “mum's the word” and “I haven't brushed my teeth in months”. I'm pretty sure the only one he ACTUALLY invented was “mum's the word” … or “just chicken 'n cheese please”.

The next night was at The Rave in Milwaukee. This is one of our favorite venues to play because it's haunted.

Everyone knows about the haunted pool. The 6th ruled (not pictured) is: NEVER WATCH “MYSTIC PIZZA” ON BLU RAY IN THIS POOL. I think it goes without saying that George broke this rule (he LOVES “Mystic Pizza” and watches it daily) and the ghosts were pissed and turned out all the lights during our set.

I rove SLAYEL! They'le my favolite band! I rove dat sawng “Lein in Brood”. — that's my impression of the ghost that wrote that.

I was trying to play it cool about the whole ghost thing. Dan snapped this shot of me, even thought I knew safety was just a somersault away, I was still kind of freaking out and you can definitely see it in my eyes.

George hid behind his iPhone. It was pretty clear he knew that he had broken the Mystic Pizza rule and was ready for a ghost attack at any moment.

The next night was Chicago. Josh was really tired for going to the Bulls game earlier, so he fell asleep on the couch. You better not fall asleep on the On Your Side Tour or we'll put carrots on you!!!!!!!! Or even worse… we'll leave you alone and let you rest!!!!! There's no telling what we might do, we're ca-razy!

There were some hair dressers on site and tons of us got our hairs cut. Video Matt™ got all of his favorite video games shaved into the side of his head. He got Pac Man on the back, Tetris on the right side and an Atari controller on the left.

He didn't get Crash Bandicoot™ because he thought it would be a little overkill since he already has a whole sleeve of tattoos dedicated to Crash Bandicoot 4: Twinsanity™ and Crash 3: Mind Over Mutant™.

In Chicago we also did an interview/acoustic performance at Fearless Radio. We love going there and always have a blast doing it! We also met up with our great friend and Precious Moments™ figurine dealer Mark Rose! Here's a shot of Mark telling Shane that he couldn't get him the one where the kids dress up in their parent's clothes and it looks really baggy on them. Shane couldn't believe it! (Mark also has a great band that you should check out at www.markrosemusic.com)

Shane was so bummed that he decided to start looking up online for other Precious Moments™ dealers, but George swooped right in and ordered 6 crates of the First Holy Communion series. He later said “Dude, you never know when they'll come in handy.”

Gym teacher Wapner, in his Wonder Years jacket, texting. Everyone tweet at him and tell him to stage dive for the rest of tour and not stage “drive” as he likes to do. www.twitter.com/ryanwapner

A few things: what is greg hitting with this right stick? Why is mike chewing gum?

A GIF of Slade kicking Greg's drums. This one is entitled “I don't GIF an F”.

Dan put these stickers on ours, and all the other bands vans. This is Go Radio's sticker. They were really offended by it, since they think they're really good drivers (and they are) so they tried to peel it off. Dan was just looking out for their safety!

Today we entered Canada™. We woke up and it was snowing. Here's the proof. Really Canada™? Snow? It was 101 degrees last week in Arizona and you want us to have snow? That's just poor hospitality.

In reality, the shows have been incredible and we're having an absolute blast. I can't believe this tour is almost over. We're definitely going to miss all of our new great friends we've made in all the bands. But, alas, it is not over yet and we are so pumped for the final week! See you soon, east coast!