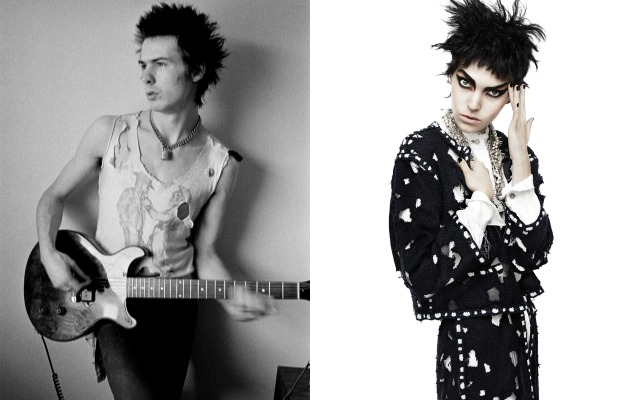 The creepy old guy at the club. Your mom on Instagram. Dave Navarro wearing black nail polish. It all kind of makes you cringe, doesn’t it? But culture appropriation–especially when it comes to trends–is always subject to the trickle-down effect, or in business-speak, the mass-market theory. Put plainly: “I listened to that band/was wearing those shoes/pierced my nose before everyone else did.”

Enter The Metropolitan Museum of Art’s latest exhibit, “PUNK: Chaos to Couture,” which focuses on “the relationship between the punk concept of ‘do-it-yourself’ and the couture concept of ‘made-to-measure.’” The seven galleries are organized “around the materials, techniques and embellishments associated with the anti-establishment style.”

So we’re here to examine the parallels between current haute couture (or those crazy-ass outfits you see on fashion runways that can cost more than a small car) and the original punks of the '70s and early '80s, whose anti-materialistic style evolved using the means available to them: tape, safety pins, cheap muslin and hand-me-downs. What others didn't want, as compared to what everyone wants–after all, supposedly haute couture, while unaffordable, is “aspirational.”

Fashion taking cues from youth and music is old-hat; been there, done that, still doing it, have the $80 T-shirt. But when does it go from inspiration to soulless imitation—and how embarrassing is it in the process? Is it all about how much integrity exists in the first place? After all, Richard Hell, founder of seminal NYC punks Television and Richard Hell And The Voidoids, did say British punk svengali Malcolm McLaren appropriated Hell’s 1974 style for the 1975 Sex Pistols; McLaren, the ultimate capitalist who championed “cash from chaos,” admitted it.

The exhibit opens with a classic quote from Sideburns magazine: “This is a chord, this another, this is a third. Now go start a band.” Along with clips of '70s-era girls in black makeup, long white shirts and nothing else pogoing to an unheard beat, it’s a good, although general, start.

But then there’s the second room. It features a wall with video mash-ups of the '70s-era NYC punk scene courtesy of creative consultant/photographer Nick Knight, and kitty-corner to that is… a recreation of CBGB’s bathroom. Yes, you heard me. The infamous CBGB, where the Ramones, Blondie and numerous others got their start. CBGB, with their hardcore matinees every Sunday; CBGB, the home of the graffiti’d bathrooms with no stalls and sinks coated in vomit or bodily fluids. This is now sitting like a life-sized diorama in a room at the Metropolitan Museum of Art, one of the most respected institutions (“institutions” being a key word here) in the world. An older lady-who-lunches, replete with her pearls, leather flats and Vuitton handbag, says loudly to her friend, “You see, this is a play on Duchamp. How clever!” Um.

But maybe “Chaos to Couture” is supposed to be clever. As I walk through room after room of fashion, from Vivienne Westwood and Malcolm McLaren’s infamous London shop (best known as Sex, but renamed Seditionaries in 1976) to the modern-day outfits from fashion designers like Rodarte, Alexander McQueen and Versace (which all cost more than a used car), I look with a cynical eye. Each room is divided into loose “themes” based on DIY: “DIY Hardware,” “DIY Bricolage” (aka, “garbage”); “DIY Graffiti and Agitprop;” “DIY Destroy.” Is this all just a Malcolm McLaren-esque ruse, a carefully constructed construct designed to fuck with the masses? Is it truly a play on Duchamp—i.e. 100-percent punk rock?

Or is it just the Cliff Notes of a generation, a mildly shocking exhibit for tourists to make them feel as though they’ve done something dangerous today by gawking at video clips of a bloody Sid Vicious, a recreation of Seditionaries that looks far too clean and neat and a bunch of expensive outfits from high-fashion designers adorning mannequins sporting brand new Dr. Martens? That is, punk rock for the one percent?

As I neared the end of the exhibit, where the piped-in audio blasted recognizable hits like “God Save The Queen” (honestly, if one knew nothing of the origins of punk, one might think that punk was entirely invented by the Sex Pistols, with maybe a few contributions from those upstarts at CBGB and a little band called the Clash), I was leaning towards the former. I was almost excited to exit though the gift shop, where I expected to see a huge placard bearing the classic Johnny Rotten quote: “Ever get the feeling you’ve been cheated?”

Then I could laugh, say, “Yes!,” and feel like it all meant something.

But all the tourists got were a mannequin in a Martin Margiela garment giving them the middle finger, $80 T-shirts designed by various exhibitors like Rodarte and high-priced rolls of duct tape in shocking pink and imprinted with safety pins. Items are also available, natch, via high-fashion website and exhibitor sponsor Moda Operandi’s “Punk Shop.” After all, what says “anarchy” more than a $625 Ashish sweatshirt or a pair of $445 Klughaus graffiti’d Dr Martens?

I began to feel nervous, like it was all some giant mind-fuck. Yes, Johnny, I’m getting the feeling I’m being cheated!

So I bought two rolls of the duct tape.

PUNK: Chaos to Couture continues through August 14 at the Metropolitan Museum of Art in New York. Visit metmuseum.org for more info.

On the next page —-> A run-down of punk fashion through history.