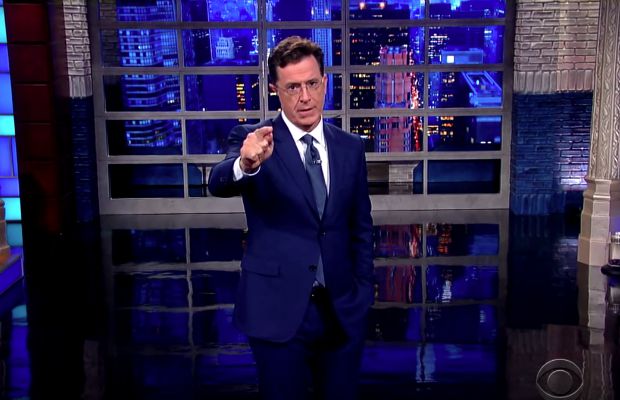 Former Comedy Central satirist Stephen Colbert is set to take over the Late Show on CBS Sept. 8. During its monumental era under David Letterman, The Late Show hosted alternative guests the likes of My Chemical Romance, Fall Out Boy, Foo Fighters, No Doubt, blink-182 and countless others.

There’s no question Colbert is up to filling Letterman’s shoes comedically—but what about on the musical front? AP can help with that. Let’s take a look at 10 acts Colbert should consider enlisting for his late-night stage immediately.

The Los Angeles-based heavy punk band brings a live show to the table that’s a total unapologetic smack in the face. Each song Jason Aalon Butler and co. deliver during a performance oozes with raw energy that would make for one hell of a late-night performance. The real question remains: Is late-night television ready for something so masterfully chaotic?

The Wonder Years would jump kick through your television and straight into your living room with a performance on The Late Show with Stephen Colbert. Fresh off the release of No Closer to Heaven and an appearance on the cover of AP326, the band bring an element of pop-punk energy many try, but few rightfully capture. As the band’s evolved musically, it wouldn’t be out of place to see either a super-emotional ballad like “Cigarettes & Saints,” or new fan-favorite “Cardinals” in the same night. Or…we could just let Colbert and Wonder Years frontman Dan “Soupy” Campbell talk about the 2016 presidential election—that’d be an unforgettable interview.

Against Me! should appear on The Late Show with Stephen Colbert for no other reason than any new late-night show deserves a heavy dose of punk rock ASAP. Laura Jane Grace and her band of heavy-hitting punks can bring songs like the utterly honest “True Trans Soul Rebel” or fan-favorite “I Was a Teenage Anarchist” to Colbert’s new stage—and totally kill it.

With the arrival of the new LP, That’s The Spirit, there’s been enough debate over the progression of Bring Me The Horizon’s sound. The new singles, “Happy Song” and “Throne,” mix modern metal with interesting plugs of industrial and electronic—making for something at a totally different sonic level of past releases. Needless to say, it’s a radio-ready sound that could take over the world…one of the stops down the path of world domination should be Colbert’s new stage.

Earlier this year the Dear Hunter released the blissful tune “A Night On The Town.” The song sways through arrangements of horns, piano-driven verses and explosive choruses. The number isn’t as much a song as it is a life-changing experience. Let’s see The Dear Hunter bring “A Night On The Town” in all of its 9-minute glory to The Late Show with Stephen Colbert—simply because few other acts in the scene can make a 9-minute song so irresistible.

FIDLAR's version of punk rock is both abrasive and whimsical. It balances on a tightrope hanging between snooty and satirical, while not being either appalling or insincere. The band’s new record, Too, contains songs ready to steal the heart of punk and surf rock fans worldwide. Songs like “Leave Me Alone” and “West Coast” itch with the pose and moxy needed to pull off a great late-night performance. Let’s make it happen, Colbert.

Things have been quiet at the Bad Books camp for several months—so why not reappear from behind the curtain on national television? For those unaware: Bad Books is the alternative rock duo made up of Andy Hull of Manchester Orchestra and Kevin Devine of Kevin Devine and the Goddamn Band. The band’s 2013 release, II, translated into a collection of monstrous rockin’ tracks live that would explode from in front of a television camera.

Fresh off a summer of domination at the Vans Warped Tour, PVRIS is the type of band ready to transcend from fast-moving scene stardom into a fully-fledged household name. Every track on the band’s debut record, White Noise, contains a hook equally infectious as the track before it—and there’s no doubt this group could mystify the world with its music on late-night television.

The indie-punk stylings of The Front Bottoms have already stolen hearts on live performance shows such as NPR’s Tiny Desk Concert series, but this group’s collection of sassy sing-alongs would fit alongside Colbert’s satirical banter and engaging interviews nicely. Songs like the new single, “HELP,” would make for a flamboyant television appearance—with kids across the country singing along to the line, “This is what I want. Motherfucker, make it happen!”

Colbert, this is a call to action from the entire scene: Bring Brand New on your show—and make them play some of that new music we’ve been hoping for. We’ll be here, waiting patiently, as you work your magic.