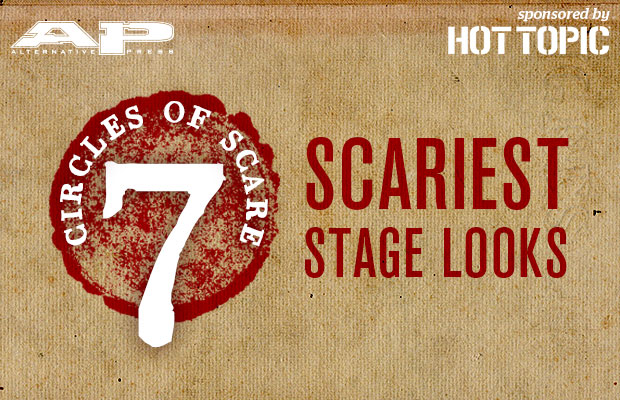 This week, we celebrate the artists for whom it’s Halloween every day as they explore the ridiculous, the creepy, the hard-to-clean-off, the artistically impressive and the NSFW when they dress up to perform.

Ghost legend tells us this band is a Satanic ministry lead by ghouls who “glorify and glamorize the disgusting and sacrilegious.” Meep! Onstage, frontman Papa Emeritus II wears full blasphemous papal regalia with a skeleton face while the band are shrouded fully in dark fabric like ominous monks.  There’s just something so spine-chilling about mixing traditionally “dark” imagery with religion. I mean, I’ve seen enough possession movies to know you shouldn’t play. —Cassie Whitt

Sure, plenty of bands and artists paint their faces or wear masks but not many are quite as extreme as GWAR. It’s not just the demonic masks and full body suits that set these guys apart, but the sheer grotesque elements of gore and violence they display onstage is what you will only find at a GWAR show. Ranging from blood-shooting cannons to blood-shooting genitals to the beheading of fellow bandmates that results in a blood-shooting mess (don’t worry, it’s all fake), you’re gonna be covered in blood by the time you leave one of their gigs. It’s like witnessing some alternate reality onstage that looks similar to what I’d expect hell to look like (I am basing this solely off South Park’s representation of the place). It feels like Halloween year ’round when you’re in the presence of GWAR, so whether it be Easter, Christmas or your grandma’s birthday, you can count on these guys—and gal, as of recently—to show you a creepy, bloody and awesome time. —Nick Major

Were Ink & Dagger really vampires? No. Did that stop them from painting their faces, spewing blood, using gnarly strobe lights and generally doing whatever they could to freak the fuck out of their audiences? Nope! RIP Sean McCabe. You were ahead of your time. —Scott Heisel

Jaz Coleman, the lead singer from one of the world's most enduring post-punk bands, has always had a commanding presence, on and offstage. While the band's records always feel like dispatches from the apocalypse, Coleman has frequently upped the ante with disturbing face paint that has at various junctures made him look like a survivor crawling from the wreckage of something burning, an approximation of the Green Goblin or a demon envoy from Hades, like on this clip of “Asteroid”  from their 25th anniversary show. There's nothing particularly ornate about the look and no need to sit in a makeup chair for hours. But damn, dude looks like some kind of figure straight out of Constantine. —Jason Pettigrew

Marilyn Manson is the ultimate shock-rocker and always will be. Aside from just being the freakiest looking dude ever, Manson dresses in strange, ornate costumes that can look as disturbing as his lyrics sound. One of the weirdest getups is when he dresses up like a bishop. There's a fighting agility to the way he moves onstage, too, like he's hunting for something or is just part arachnid. The disgusted, animalistic facial expressions he makes are the icing on Manson’s cake of creepiness. —Matt Crane

From 1988 to 1991, Swedish black metal group Mayhem (who still perform today, albeit after numerous lineup changes) were fronted by Per Ohlin, better known by his stage name: Dead. An introvert who suffered from delusions that his own blood was frozen in his veins, Dead would paint himself to look like a corpse onstage, would bury his clothes for days and spend time around dead animals to achieve a more cadaver-like appearance. Mayhem's performances at this time reflected Dead's state of mind, and would occasionally feature impaled animal heads, among other horrors. The singer's fixation on death, unfortunately, led him to self harm and, ultimately, to suicide; an event that was subsequently exploited by guitarist Euronymous to boost the band's dark image until his 1993 murder at the hands of another bandmate. —Philip Obenschain

While Motionless In White’s look is more haute-goth than scare-factor as a whole, it’s bassist Devin “Ghost” Sola who takes them into horror territory onstage. Ghost derives his various looks from a cast of creepy characters, whose aesthetics he’s replicated with costume and makeup. Past inspirations have included: Sweeney Todd, Beetlejuice, Billy from Hocus Pocus, Cruella de Vil and most recently, Mary Shaw from Dead Silence (pictured). —Cassie Whitt

Dildos, diapers and deranged songs about sex: Meet Shat. The universally panned punk group were formed by Jeff Wood, a guy who played for the Dillinger Escape Plan before being booted (“There were certain episodes like missing a show on the Mr. Bungle tour because I was off banging some chick that worked at the club.”). The artistic freedom of being on his own allowed for song titles like “If She Has A Kid You Know She Fucks,” “Grandpa Is Playing With His Penis,” “Lick My Balls, Then My Ass” and hundreds of other registered offenders. As Shat folklore goes, Wood endured a freak accident that left half a bullet lodged in his head. “I was shot from a second-story apartment window as I pulled out of a parking spot, the bullet went through the roof of my van and into my head, I didn't feel a thing. I was a sick kid before the bullet, but it definitely changed some parameters in my life at that point,” he once said in an interview. —Brian Kraus