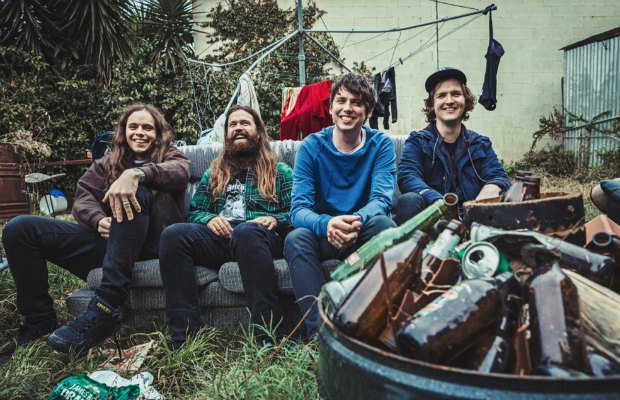 We at the AP office have been enamored with Australian quartet Violent Soho’s new album, Hungry Ghost, out now on SideOneDummy. It’s an awesome slab of ’90s-throwback rock, with plenty of grunge influences as well as party-hard vibes. But as it turns out, VS aren’t the only awesome band currently operating Down Under. We asked the guys to pick their favorite Aussie bands (both up-and-coming and established) for you, the loyal AltPress.com reader. Now get on your music service of choice and start listening!

This band plays the kind of heartfelt punk music that makes you feel like you’re at the best house party ever with all of your best friends, just after you've had a couple of bongs of the best beer in the world and the hottest chick at the party just winked at you.

The Smith Street Band have become an institution for indie/punk bands in Australia. They are absolute heroes of ours and some of the best and most down-to-earth humans you will ever meet.

Ceres are one of those bands that you find so exciting because it's like you've discovered some sort of treasure. This is a band that really deserve to be sharing their music with the whole world. Their music is amazing and fuck, they are talented!

You might as well love this band for the heart-on-sleeve sincerity alone. They play hammering guitar music that oozes class. Think early Soul Asylum, later Replacements and Bob Mould, in general.

Sounds Like Sunset have been around for almost 20 years, and the album they put out this year is one of the best Australian albums of all time. This is the band that wrote the book on Big Muff and stole Ringo's mojo. Listen to them!

DZ Deathrays and ourselves used to be the only guys who would show up at each other's parties. Everyone was missing out then, so don't bloody do it now. DZ are one of the best live acts Australia has to offer. Honestly, they just show up every other band in the room.

This Brisbane band has been blowing minds since the early ’90s. Just last weekend we saw them play and they are still blowing our minds. These guys play the best kind of noise punk: where you just tear the shit out of your instrument and riff your nut off.

If you've heard any of those recent Brian Jonestown Massacre albums and liked them, then go burn all those records and start listening to Roku Music.

Basically, these guys built their own guitars and play Sunn 0))) gear almost exclusively. Live, they create an immense wall of sound through which they channel shoegaze, with the flavor of black metal. They are a world-class act ,as well.

Straight Arrows are some of our oldest buddies. We've been playing shows with them since we first started our band, and over the years we've watched them own every other motherfucker there is. Music doesn't need to be anything other than Straight Arrows.