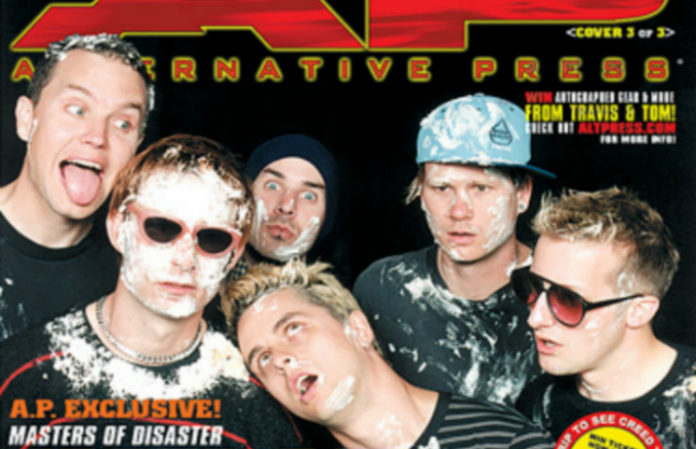 Anyone else get some serious FOMO from clicking through Wikipedia pages and tour posters and seeing page after page of dope tours? (Why did everything good in the world happen in 2006?) But what’s awesome and unique about our music scene is that it brings so many people of different age groups, interests and backgrounds together! It’s up to us to inspire and educate the next generation of musicians and fans—and hey, appreciate what you have in the moment. (Who would have thought we’d have the blessing of so many 10-year-anniversary tours this year?) In that spirit, here’s a list of awesome tours in the past that you might have been too young to attend!

This seems like the tour out of our collective dreams—two bands who are arguably the kings of pop punk, Blink 182 and Green Day, with “supporting acts” Jimmy Eat World and Saves The Day. It was borne to display a message of unity between the two headlining bands, who were often speculated to be rivals. It also included a smaller supporting band, Kut U Up, and was the subject of the 2003 documentary Riding In Vans With Boys—recommended viewing for any Blink-182 fan (over the age of 18).

The Honda Civic tours have often served our scene well—this iteration featured New Found Glory and Good Charlotte as headliners with Less Than Jake, MXPX and the Movielife as supporting acts. This tour was in direct support of New Found Glory’s Sticks And Stones and Good Charlotte’s The Young And The Hopeless, which have become classics of the genre.

Ah, the tour of perfect timing: Fall Out Boy had just released Take This To Your Grave and signed with Fueled By Ramen. They were supported by Armor For Sleep and Bayside for this tour and also played SXSW and five dates of Warped Tour. This tour also inspired their 2009 “Believers Never Die Tour Part Deux” featuring Cobra Starship, All Time Low, Metro Station and Hey Monday—talk about some super tours.

Created by Warped Tour founder Kevin Lyman, the 2005 Taste Of Chaos tour was wildly successful—so much so that it added international dates due to overwhelming demand. The tour was headlined by the Used, Senses Fail and My Chemical Romance and was supported by Underoath, Saosin and Killswitch Engage. The variety of genres prompted a mixed and eclectic audience, combining teenage emo kids and older heavy metal fans. Crowd dynamics aside, the experience was enough to make it a “best concert” in anyone’s book.

Alright, if this list proves anything, it’s that the boys in FOB definitely know how to put together a tour package. After Believers Never Die, they released From Under The Cork Tree—just as the Starting Line had with Based On A True Story. Pair this with Motion City Soundtrack, Boys Night Out and Panic! At The Disco right after the release of A Fever That You Can’t Sweat Out, and you’ve got a pretty incredible evening. As if that wasn’t enough, each venue had the lobby decked out with gaming stations to promote the new Gameboy Micro and the handheld Nintendo DS (you know, before all the 3D mumbo-jumbo).

The Black Clouds and Underdogs Tour (2006)

This tour was monumental for these bands. It was their way of telling the world that rock music was back on top. It kicked off in March 2006 and ended in May, exactly one year after the release date of Fall Out Boy’s iconic album From Under The Cork Tree. FOB treated fans with an exclusive limited “Black Clouds and Underdogs” edition with bonus tracks and remixes. This was also in between the releases of the two All American Rejects singles “Dirty Little Secret” and “Move Along,” with the former being the No. 1 most downloaded song on Itunes at the time.

You were wondering when we were going to mention Paramore, weren’t you? For their 2007 headlining tour, Fueled By Ramen’s shining new stars were joined by the Starting Line, Set Your Goals and the Almost. This was right after the release of RIOT! and “Misery Business” was in the top 10 music videos every week on MTV and Fuse. This was also the year that the Almost released their album Southern Weather, proving to the world that Aaron Gillespie is more talented than any of us will ever be. Don’t you miss 2007?

The Soundtrack Of Your Summer Tour (2008)

Diehard Boys Like Girls fans can easily note that this tour was named after a line in the song “Thunder.” It was co-headlined by Good Charlotte and supported by Metro Station and the Maine. Boys Like Girls were still promoting their eponymous 2006 album while Good Charlotte were pushing Good Morning Revival. This was also right after the mid-2008 release of the Metro Station single “Shake It,” which exploded its way into everyone’s ears and has remained stuck in our heads ever since.

First, we have to point out the obvious: the name is outrageous, hilarious and would absolutely NEVER fly nowadays. This tour featured All Time Low for their first headlining tour, and it included special guests Mayday Parade, Just Surrender and Every Avenue. All Time Low were promoting their album So Wrong, It’s Right and Mayday Parade had just released A Lesson In Romantics, both of which are considered classics today.

This list wouldn’t be complete without mentioning one of the greatest lineups the AP Tour has ever seen. It was co-headlined by The Academy Is and Mayday Parade with Set Your Goals, the Secret Handshake and You Met At Six in supporting roles. It was an interesting time in both of the co-headliners careers, The Academy Is had just put out their Lost In Pacific Time EP and were on the verge of a breakup, and Mayday Parade had recently parted ways with vocalist Jason Lancaster. Still the tour was largely successful and helpful to the budding careers of Set Your Goals and You Me At Six.