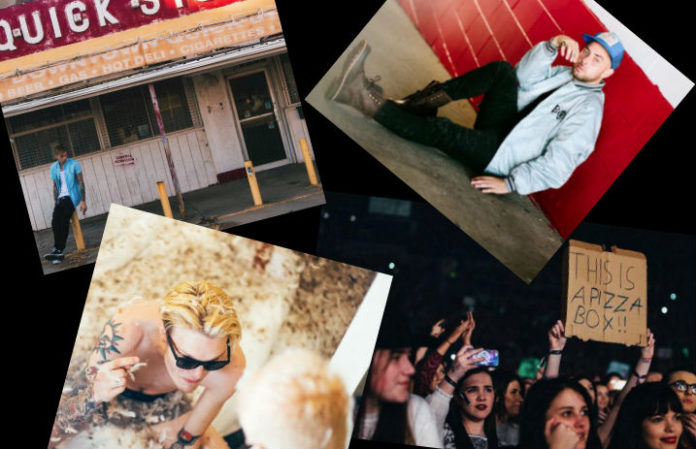 You may think you’re an excellent with your iPhone and your selfie stick or expertly arranged photo-op that’s so perfectly set up it doesn’t look set up at all. You may even have apps that put Instagram’s filters to shame. What you might not have is direct access to your favorite artists—like some of the scene’s photographers. Head below for the Instagram feeds you’ve been missing out on.

Falcone has toured with All Time Low and Mayday Parade (among many others), so his feed features plenty of moments from venues, video shoots and everything in between. He’s also ventured into the world of ad campaigns, capturing Issues, the Wonder Years, Bayside, Echosmith and more for brands like Hot Topic, Journeys and Glamour Kills.

Out of the photographers listed, McPerry definitely has the most creative approach to documenting life on the road and other adventures. When viewed on his complete profile, his images all overlay and create a unique and dynamic visual. It’s pretty cool to say the least, and it doesn’t hurt that he includes sweet shots of Machine Gun Kelly on various tours he’s accompanied him on.

Screamer with The Used after my first shoot for @altpress Also right before the hotel staff discovered a dead body in the room across the hall. Never go in The Cecil hotel… It’s haunted. #TBT 2009

Thompson specializes in commercial photography, snapping promo shots for everyone from All Time Low to Anti-Flag to 3OH!3. She sometimes shares what she calls “screamers” after these shoots— they’re the most badass way to snag a selfie ever. Thompson also posts Polaroid portraits of artist, offering a fresh perspective. Outside of her own feed, her work has been spotted in an EP by Cassadee Pope and the backdrop of ATL’s Future Hearts Tour.

Had the pleasure of directing the new @neckdeepuk music video out in Australia 2 weeks back! 2 weeks on and I haven’t had a bill for the hole we left in that hotel wall yet, so that’s something to celebrate at least �� link in my bio. �� @joshuahalling

Ingham globe trots with State Champs—snapping photos on stage and off—and has also worked with the bands’ tourmates ROAM and Neck Deep on music videos. If you’ve ever wondered if the latter’s vocalist Ben Barlow really did roll across the bed and through the hotel room wall at the end of “Kali Ma,” following Ingham’s feed will answer your question.

This is very funny, that’s what this is.

Hoeg has documented New Politics’ touring ventures and is now doing the same for 5 Seconds Of Summer. He offers a different perspective on the crowds who fill the venues (see “this is a pizza box” sign) and has produced on-brand portraits of 5SOS—from pre-and-post performance blended photos (that the Aussies had as their Twitter profile pics for quite a while, thank you very much) to candids of them clubbing in provided onesies.

������ @bradley.walden Part two of my @vanswarpedtour recap blog series is coming tomorrow. It will feature days 21 – 36 and ALL of my favorite snaps from this summer. Make sure to check out part one by clicking the link in my bio or visiting ashleyosbornphotography.com/blog.

Osborn has a knack for capturing the raw emotion musicians display on stage, whether it’s Pierce The Veil’s Mike Fuentes curling backward on his drum kit or Emarosa’s Bradley Walden hanging out (literally). She tours full-time around the world and her amazing live shots cover everyone from Panic! At The Disco to Bring Me The Horizon. She’ll also be on Warped Tour all summer, even teaching a TEI class about tour photography—grab her tips firsthand!

Touring the world with acts such as Like Pacific, Abandon All Ships, Beartooth, Every Time I Die and Real Friends, Cuffy’s feed provides the traditional on and off stage photos of the band, but keeps it fresh with his way of capturing random tour stops.

Elmakias is one of the best-known photographers in the scene, capturing awesome angles and working with bands such as All Time Low, A Day To Remember and Pierce The Veil. His portfolio has expanded to include everyone from Justin Bieber to Coachella acts peppered in between the scene’s mainstays. One of the best parts of Elmakias’ feed, however, is his effort to inspire other photographers. He accomplishes this with behind-the-scenes images of his process, tips and contests—such as the one he held to shoot with him while in the U.K. with All Time Low this past February.

Alternative Press x JW Covers 2010-2015. My first cover of 2016 to come out next month. Thanks for the loyalty and fun times @altpress @mikesheaap ! #altpress #jonathanweiner #canon #profoto

Weiner has shot many a cover for AP with the most recent being the current issue #335 featuring Panic! At The Disco and Weezer. Despite boasting an impressive portfolio, he keeps his feed rather neat. Each post doesn’t have much more than who is in the photo, when and where it was taken and for which source if the latter applies, all of which allows the images to more or less speak for themselves.

Martin has hit the road with Sleeping With Sirens and Set It Off and has done portraits for artists such as A Day To Remember, Gym Class Heroes and William Beckett. He also does live event photography, so don’t be surprised by the appearances of people like YouTuber Jenna Marbles or Avril Lavigne and Nickelback’s Chad Kroeger in your feed.