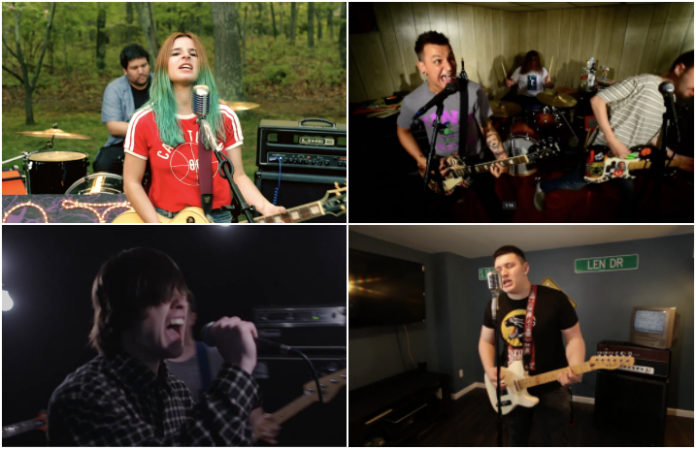 Ah, “Lawn Guy Land”: a place of diners, bagel shops and over-the-top Sweet Sixteens galore…and not to mention, some sick-ass pop punk! Everyone from legends Brand New, Taking Back Sunday and the Movielife to Bayside and Patent Pending, the contiguous nation’s largest island is no stranger to contributing to the genre. While these aforementioned acts have been around for quite some time, that doesn’t mean the dream for blooming bands is long gone! Here’s a sample of some of the best new pop-punk bands to rock the Island:

A side project of Stray From The Path vocalist Andrew DiJorio and former drummer Dan Bourke, Afterparty are the alt-pop answer to SFTP’s metalcore edge. Their debut EP, I Hope You Don’t Make It Home, was produced by Fit For An Autopsy guitarist and famed producer Will Putney, and they’re already gaining critical acclaim.
Check out: “One.Five.Three.”

With a sound reminiscent of early 2000s pop-punk acts, Approaching Troy aspire to be the next big thing out of the East Coast. Originally the solo project of lead singer Jake Salazar, the band quickly formed into what it is today and soon found themselves opening for acts such as Hawthorne Heights and Creeper.
Check out: “Wake Up”

Behind The Façade’s energetic sound is relatable and reminds us that “nobody likes you when you’re 23.” They opened for Enter Shikari and Hands Like Houses last year, and were even featured on our “100 Bands You Need To Know” list in 2015. Glad to know that they’re still killing it in the new year!
Check out: “Stalemate”

The B-List’s debut album, Fully Ignorant, might’ve been five years in the making since their 2011 formation, but boy did it pay off! The album is loaded with catchy tunes and their obvious talent has earned them plenty of local live gigs, including one action-packed show opening for Such Gold.
Check out: “Running Away”

These Middle Village punks are anything but conventional with their fun sound and even funnier videos! Having played a variety of local venues, they show that you don’t need a large stage to have a good time…although they have opened for acts such as Wheatus, Andrew W.K., Our Last Night and Aaron Gillespie—just to name a few.
Check out: “Big Sad Clown”

In only two years, tri-state area based (and therefore appropriately named) From States Away have already catapulted into the pop-punk scene, quickly gaining a spot on the 2015 Vans Warped Tour. Since then, they’ve had the chance to open for Like Pacific during a New York tour stop alongside Broadside, Rarity and Boston Manor.
Check out: “Fight Or Flight”

Usually, when a rock band throws a horn section into the mix, we just call it “ska.” This quirky sextet are looking to change that, fusing pop punk with flares of saxophone and trombone to create a truly unique sound. They’ll be playing the So What?! Music Festival in Grand Prairie, Texas, next month.
Check out: “Safety Harbor”

Hailing from the borough of Queens (yes, we know Queens isn’t technically part of LI), Legend Of You is already off to a great start, having their debut EP mastered by Chunk! No, Captain Chunk!’s very own Bertrand Poncet. They’ve been working their butts off ever since, landing shows with bands like Veara, Seaway and more!
Check out: “I’m In The Empire Business”

Since the release of their first full-length, Better Off, in 2014, Makeshift have made the rounds at a variety of festivals, including Today’s Mixtape Festival, Launch Music Conference and Vans Warped Tour. Their latest EP, Morale, has earned them spots opening for the likes of established acts Tiny Moving Parts, Citizen and Speak Low If You Speak Love.
Check out: “Someone Like Me”

Hoping to merge ’90s roots with a fresh new spin is Shorebreak, whose latest release Misdirection is sure to be playing from your speakers on repeat for days. They opened for famed Seattle rockers Acceptance on a recent tour stop and we’re excited to catch them back on stage this spring!
Check out: “Fall”