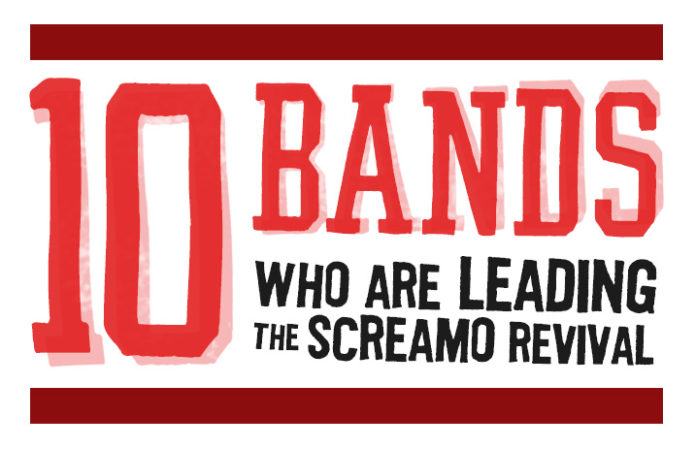 In 2014, we gave you 17 bands who would influence the inevitable screamo revival of 2017. Over the past year or so, various groups throughout the scene have begun taking those bands’ formulas and making them into something entirely new. Below are 10 acts who we believe are leading the genre’s revival.

Wolf:Speak are fronted by Oceana vocalist Keith Jones (ca. 2008's The Tide). Jones later joined another former Rise Records act, Decoder, who released an album and changed their name to Lead Hands before disbanding in 2012. Hear the band's punishing post-hardcore track, “Get Real,” above.

Before Their Eyes’ latest album, Midwest Modesty, was co-written by Craig Owens, and the post-hardcore vocalist’s presence is undeniable. Fans of Owens’ heavier moments, as well as those who enjoyed Before Their Eyes earlier years, will appreciate Midwest Modesty for its nod to an era that has since been forgotten by many.

CROOKS’ Equal Vision debut, Are We All The Same Distance Apart, is a melody-driven salute to screamo’s powerviolence roots. Look for this band to make big waves in the near future.

The Ongoing Concept’s latest studio album, Handmade, is a vicious post-hardcore assault—and they made all the instruments used to record the album by hand. (Get it?) Hear “Unwanted” above.

Too Close To Touch

Too Close Too Touch’s Epitaph debut, Nerve Endings, is an emotive whirlwind of new-wave post-hardcore. Check out the LP’s title track, along with an accompanying movie, above.

Pennsylvania’s Secret Eyes are a must-listen for any fan of the higher end of screamo’s spectrum. “Oh Dear,” which features Slaves frontman Jonny Craig, is an innovative, refreshing take on a genre that was once inundated with carbon copies.

I Am Terrified (originally named Fixed ’Til Tuesday) called it a day over six years ago. Judging by their Facebook page, however, it looks as though they will be returning sometime in 2016. They recently made their incredible self-titled EP (which has a track featuring Maylene And The Sons Of Disaster, ex-Underoath frontman Dallas Taylor) available on all major online music markets. Check out their song “Heaven Knocking, Hell Rising,” along with an accompanying music video, above.

Miss Fortune's debut full-length, A Spark To Believe, is, without a doubt, a post-hardcore masterpiece. From its adrenaline-pumping opener, “We’re Not In Kansas Anymore,” to its brutally honest closer, “Take That Shit Back To Baxter,” nearly every aspect of the LP will leave any ‘00s post-hardcore fan grinning from ear to ear.

In 2003, Saosin released their debut studio effort, titled Translating The Name. After parting ways with singer Anthony Green in 2004, the band enlisted Cove Reber and released their self-titled LP in 2006. After unveiling a follow-up, titled In Search Of Solid Ground, in 2009, the band parted ways with Reber and things went silent. Now, in 2016, Saosin will return with their first album in nearly seven years. The screamo revival is real, and Saosin are on the frontline.