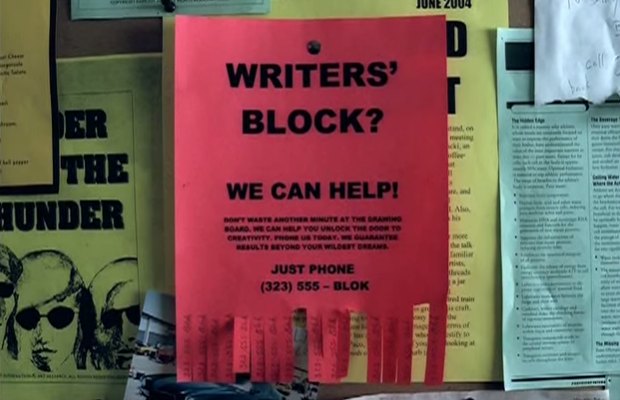 One way to overcome a lack of inspiration or self-satisfying lyrics—otherwise known as writer's block—is simply to write about it. There's no doubt some of these are the laziest songs ever written, byproducts of killing time until the next track, while others are the result of hitting a few creative speed bumps on their way to the studio.

Gwen Stefani – “What You Waiting For?”

Interscope head honcho Jimmy Iovine attempts to jump start Gwen Stefani's solo career, but she finds herself tired and uninspired. Somewhere in this seven-minute video, Stefani finds a flyer offering help for writer's block, and then goes on a fantastic Alice In Wonderland-inspired journey for her first single out of the No Doubt camp.

Hmm, what could this be about? “I can't start/What do I say at the end of another day/It's not okay/Another 14 hours and I've got nothing to say.” Who cares if the lyrics were written by a rhyming dictionary? It still rips.

Deja vu, much? Another stumped hardcore song wears the same name tag as Nora's. “We killed the meaning/There's nothing to hear/Say it again/We're all shooting blanks.”

Where's the new Brand New album at? Who knows—but maybe the lyrics of “Failure By Design” are relevant to this burning question. Jesse Lacey opens up about writer's block, basically giving studio commentary in a song. There's referencing to his pacing (“This is a lesson in procrastination”), perfectionism (“We don't believe in filler, baby”) and downright pressure (“I'm out of everything/No one sleeps/Until we get this shit/Out on the shelves”).

Jets To Brazil – “I Typed For Miles”

JTB's Blake Schwarzenbach generously self-deprecates on “I Typed For Miles,” his ode to writer's block. Furthermore, he questions if anybody will even care about what he writes. “Note to self/No one cares/Your voice is average/In worried piles/I typed for miles/And you just stood there.”

Mock Orange – “Nothing To Write”

The emo revival ought to pay more respect to Mock Orange, whose first two LPs were calculated air strikes of earnest math-rock. Produced by a budding Mark Trombino (Jimmy Eat World, All Time Low, Blink-182, Finch and heaps more), 2000's The Record Play included a song about being lyrically starved: “7:27/There's paper on the floor/One eye open/And nothing to write.”

Lower Than Atlantis – “Wars With Words”

Dying before it's lived two minutes long, “War With Words” is serious about this whole writer's block thing. Frontman Mike Duce brings the bluntness: “Inspiration lost in thoughts/I've got writer's block and I'm against the clock/Hopefully, the melody accompanied by phrasing/And delivery should be enough.”

Somewhere in this panicked turn of the century hardcore favorite, AN frontman Wes Eisold screams “Writer's block is a bitch,” leading to a realization pre-dating his Cold Cave career path: “Screaming gets you nothing.”

Into It. Over It. – “Afternoon’s Asleep”

By the 47th week of Evan Weiss' 52 Weeks project (where he wrote and recorded a new song every week for an entire year), he was rightfully a little worn out. And that's what he wrote about: “I've got nothing to do or say this week/I'll spend the better half of my afternoons asleep.”

These guys are too green to run out of creative gas, yet that's what this entire song entails. “My tongue is tied/My brain is fried/I'll never speak again.” You'll get through it, dude!