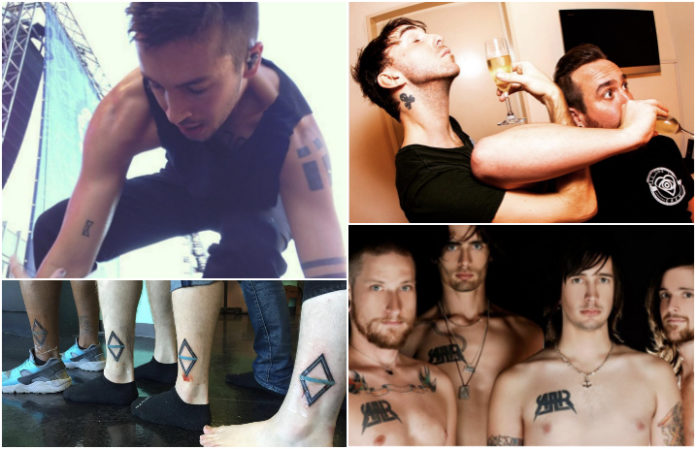 Just like friendships and relationships, bands sometimes solidify their bonds with permanent ink. From simple logos to extravagant panthers, head below for some of the best matching tattoos amongst band members.

Read more: 13 ways to show off your love of music with tattoos

Bunny got a shot in his butt

The guys in All Time Low will be bonded forever by their matching ink of their own skull and crossbones logo.

The All-American Rejects all share their band logo as a tattoo. Frontman Tyson Ritter allegedly added an electrical outlet and plug to his to change it up after the band kept receiving questions on whether AAR was a fraternity.

Though PVRIS have matching Friday the 13th tattoos to commemorate their first tour, the trio also have the band’s logo inked behind each of their left ears.

In 2013, Twenty One Pilots’ Tyler Joseph and Josh Dun got tattooed onstage in front of 6,000 people in their hometown of Columbus, Ohio. The small X on Joseph’s arm and behind Dun’s ear was meant to serve as a way to remember the show and their hometown fans. The duo took the tattoo gun in their own hands in 2015 after a mock debate and a Twitter poll that ended in a tie and them tattooing their names on each other onstage yet again.

What a way to ring in 8 years. We’re in this for the long haul and we will NOT let you down. We’ll start by making you very proud with our upcoming record #UpsideDown Here’s to the future and to you all being a HUGE part of it! ⟠ Photo and tattoo by: @lindseebeetattoo

Set It Off celebrated their eighth year as a band this past July. The quartet commemorated the occasion on the 2016 Warped Tour Minnesota date by inking the diamond logo that first appeared with 2014’s Duality on each of their ankles.

Paramore bassist Jeremy Davis parted ways with the band in December 2015, but before that, he joined frontwoman Hayley Williams and guitarist Taylor York in getting the band’s bar logo tattooed.

This band means everything to me, and so do my brothers, so I got this! X

Prior to a copyright infringement claim in 2015 that caused 5 Seconds Of Summer to drop their original tally mark logo, drummer Ashton Irwin inked the image on his wrist as his first tattoo. Bassist Calum Hood also has the original logo on his outer arm.

Taking Back Sunday guitarist Eddie Reyes has a large tattoo of a panther, and in 2012 the rest of the members decided to follow suit and get the same tattoo. Reyes explained that it’s symbolic of brotherhood, and the band kept going with the panther theme, introducing it into their merch and putting it on the cover of 2014’s Happiness Is.

Founding Maroon 5 members Adam Levine and Jesse Carmichael celebrated 10 years of being a band in 2004 by inking the Roman numeral for 10 on each of their arms.

Been waiting for my chance to have one of these little pieces of loveliness! I finally woke up early enough! Thanks @sisterpiedetroit for the yum yums! #handpie #Detroit #sisterpiedetroit

30 Seconds To Mars introduced their triad logo with the release of 2009’s This Is War. Since then, all three members have inked said logo—frontman Jared Leto on both forearms, drummer Shannon Leto behind his ear and guitarist Tomo Milicevic on his wrist.