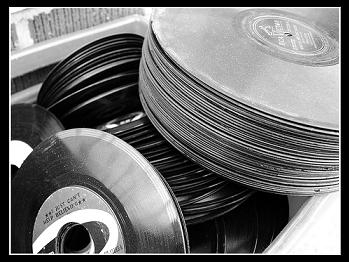 We hope that 2014 is going to be the year you stop settling for compressed-to-hell MP3s and start collecting vinyl albums. Records sound vastly superior when compared against those compressed MP3s you got for free. They have great artwork, lyric sheets (usually) and extensive notes about the music, as well as voluminous “thank you” lists where you might discover your next favorite band.

Now we know you’re itching to start your collection with a German import double-disc colored vinyl pressing of Brand New’s The Devil And God Are Raging Inside Me. But hold on there, buddy: Why not take that wad of Christmas money, march into a record store and buy numerous crucial records from the entire spectrum of punk? Yeah, colored vinyl sure is pretty, but you don’t stare at them while they’re spinning.

We know record collecting can be a daunting, overwhelming exercise, tainted by trying to keep up with limited-pressing runs and collector-scum vermin getting all high and mighty on you because you were seven when a crucial record came out. But we’re here to help you get going. (You’ll be doing a lot of pre-ordering in the future, promise.) Where do you start? Well, we know there’s no way to make any internet list of “essential” anything bitch- or troll-proof. Hence the two basic terms decided upon for this list were the continued significance of these records throughout the years to this scene, followed by their constant availability in the last remaining brick-and-mortar establishments. (So you will never hear “Dude, it’s been out of print on vinyl for seven years. Sucks to be you” from lifers or uppity salesclerks.) Now go get a turntable and feed that beast!

AGAINST ME!, Reinventing Axl Rose (NO IDEA)
WHY: Laura Jane Grace crafted an alloy of earnestness and cultural analysis couched in gruff vocals, thereby establishing Against Me! as the next generation in a lineage that includes Social Distortion and Rancid.
TURN UP: “Pints Of Guinness Make You Strong” extols the power in self-medicating against your worldview. The world’s a mess, it’s in your drink.

BLACK FLAG, Damaged (SST)
WHY: Because before you were born, somebody had to redress the balance of all the putrid mainstream garbage the late ‘70s had to offer. Black Flag ignited a musical zeitgeist that put the world (including agents of law enforcement in Southern California) on notice. DIY ethics/subterfuge + attitude + fearlessness = Black Flag. Your favorite bands wouldn’t feel that way now if someone didn’t prove it could’ve been done decades ago.
TURN UP: “Rise Above.” Because it’s not just a song title: It’s a fuk’n way of life.

BLOOD BROTHERS, …Burn Piano Island, Burn (SECOND NATURE)
WHY: The Blood Brothers’ major-label debut (on vinyl courtesy of Second Nature Recordings) is the stylistic musical equivalent of being trapped in a racquetball court while 25 players launch Hi-Bounce Balls at you. Chrome-melting post-hardcore that’s vibrant, life-affirming and sometimes downright unlistenable.
TURN UP: “Ambulance Vs. Ambulance,” where the tag-team vocal style of Johnny Whitney and Jordan Blilie feels like they’re running a relay and burying the runners baton in each other’s chests.
CIRCLE JERKS, Group Sex (FRONTIER)
WHY: With 14 songs in 15 minutes, this record is a crucial document of snotty SoCal punk, back in the days before “slam dancing” became “moshing,” and the energy was still in its nascent stage. Sample song titles: “Deny Everything,” “World Up My Ass” and “I Just Want Some Skank.”
TURN UP: “Red Tape,” because Lucky Leher’s drumming is a benchmark of supreme feckin’ coolness and frontman Keith Morris hates, well, everything.