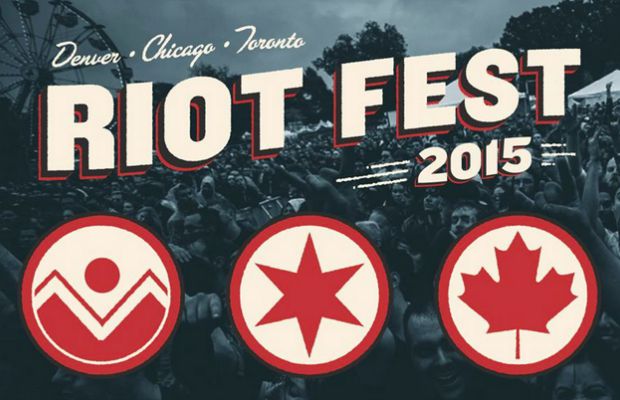 Riot Fest Denver kicks off today, August 28, with a killer lineup, featuring the likes of Modest Mouse, Snoop Dogg, Pixies, Tenacious D., Coheed And Cambria, Alkaline Trio and many more. To get pumped for the fest, we’ve dreamed up 10 amazing scenarios that could—never say never—happen this weekend.

ANTHRAX BRING THE NOISE WITH SURPRISE GUEST(S)
There's a decent percentage of high-profile hip hop at this year's festival, something New York thrashers Anthrax once dabbled in during the early '90s. The likelihood of a Chuck D/Public Enemy appearance may be slim but it's certainly possible. It's hard to say whether or not a “Bring The Noise” reunion would click with the crowd in 2015, but it would be exciting nonetheless, especially if Flavor Flav were present. [BL]

LEMMY HELPS RANCID BRING OUT THE WOLVES
Motorhead founder/bona fide rock god Lemmy was an early adopter of punk rock (people, you need to see that Damned doc, stat), and nobody knows that better than punk-rock lifers and historians Rancid. It would be totally amazing if Lemmy walked out onstage and beat the hell out of that bass solo on “Maxwell Murder” when the band perform their …And Out Come The Wolves in its entirety. I know this could happen: I remember when Rancid played Warped in downtown Cleveland the same day Motorhead were playing a huge outdoor gig (Aug. 5, 2003) an hour out of town. Lemmy sent an invite to guitarist Lars Frederiksen to come out and throw down. Warped schedules being what they are, the decibel fest did not occur. But if Lemmy stays in Denver one more night, it could happen. Or Lemmy can saunter out during the Damned's set and set the punk wayback machine to 1978—and life would be magic again. [JP]

ANDREW W.K.'S NEW OUTFIT
Wouldn’t it be life-fulfilling to see Andrew W.K. take the stage in anything other than these white pants and T-shirt that look like they haven’t been washed in 10 years? I mean, seriously, does he ever even take them off? Just imagine him launching into “Party Hard” while clad in an unbuttoned Hawaiian shirt and cargo shorts. The crowd would be in absolute pandemonium before a note was even played. [TS]

CUBE'S SPECIAL GUESTS…
Maybe I'm still too hyped from Straight Outta Compton, but the blatant teaser of Ice Cube bring out “special guests” just makes me pray for an N.W.A. reunion, with Dr. Dre, MC Ren and DJ Yella expressing themselves on the Denver stage with Ice Cube. Hey, nothing heals old wounds like a multimillion dollar biopic (with a few glaring omissions) right? If I can't get that, Snoop Dogg should saunter over for some kind of West Coast all-star performance. Then, maybe I can forget about “California Gurls.” [LM]

It may seem strange to wish injury on one of the best melodic punk outfits in the scene now, but if you've seen the breathless morbid theatrics of PUP's “Reservoir” video, you too may have wished for the role of the band's personal defibrillator. Cartoonish and frenzied, the video is another great clip from a band whose videos are consistently jarring. What can I say? Sometimes the best tool at a rock show is a staple gun, becaue what’s rock ‘n’ roll without the promise of danger? [LM]

EAGLES OF DEATH METAL'S JESSE HUGHES GETS SOME DAMNED-NATION
In Don't You Wish That We Were Dead, director Wes Orshoski's excellent documentary of legendary British punk band the Damned, Jesse Hughes of the Eagles Of Death Metal is interviewed. At one point in the film, he makes fun of Damned frontman Dave Vanian's mid-’80s foray into frilly pirate shirts, and later on demands the band put their past differences behind them and get the original lineup (with guitarist Brian James and drummer Rat Scabies) back together. Hughes would probably soil his G-Stars if he saw Vanian side-stage giving him a withering glare during the Eagles' set. The probability is slim though: Vanian steadfastly refuses to watch the movie, so he hasn't witnessed Hughes' transgression. Now if Dave's lurking on altpress, though… [JP]

INSANITY
Drive Like Jehu. Playing music. That is all. [MC]

SYSTEM OF A DOWN BRING THE SHAME

Imagine if System Of A Down brought out surprise guests, Wu-Tang Clan, and performed their wicked collaboration “Shame” (taken from 2000's underrated Loud Rocks comp). The song's intro is booming, as Serj Tankian screams, “I'll fuck your ass up!” The crowed would be jumping up and down in a second, and the cumulative force would create a San Andreas-size fault line straight through Denver. [MC]

WES EISOLD GIVES UP DEATH GRIPS' GHOST
There is absolutely no doubt that Wes Eisold will shearing some throat lining when American Nightmare stalk the Riot Fest stage Friday afternoon. And while Denver's hardcore faithful will beat each other senseless in the pit during their set, it would be completely amazing if the singer found himself onstage with hip-hop/noise provocateurs Death Grips a little later on. Why not? As CEO of synth savants Cold Cave, Eisold knows how to tweak a ton of analog gear for maximum terror as much as Death Grips' frontman MC Ride has a vibe for rhyming over waves of straight-up noise. The only reason it shouldn't happen? I won't be there to hear it. [JP]