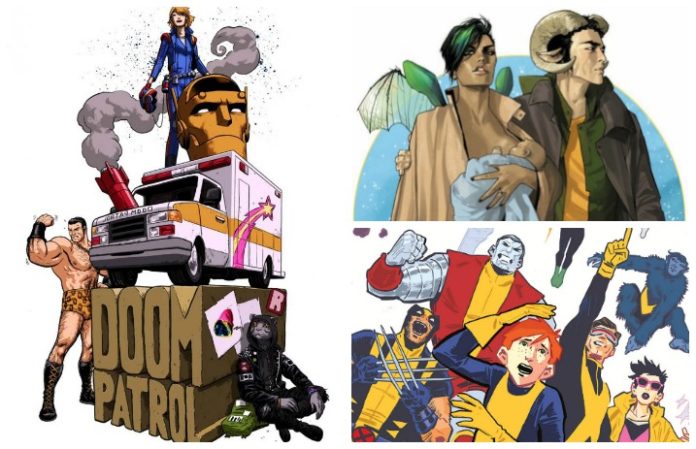 It’s extremely hard to narrow down the thousands of great comics into a top 10 list, but Alternative Press wanted me to make things easy for you. Whether you’re in our music scene or just a fan of pop culture, these are the ten comics that I would highly suggest you pick up immediately.

Yes, Max Bemis of Say Anything writes for Marvel and it’s everything you’d expect from him and more. Worst X-Man ever is a hilarious and heartwarming story about a kid who discovers he has a superpower: the ability to explode at any time! Unfortunately… he immediately dies if this ever happens. Throughout the five issue series, Bailey works with the X-Men to discover how to harness his unusual and seemingly pointless power, while finding his place in a new, weird world. His new series, The Foolkiller is currently in the works. (Marvel Comics)

An outer space Romeo and Juliet style love story with larger than life drama, modern humor and realistic and relatable dialogue. Every time someone would pitch this series to me, it was usually something along the lines of, “I’m not telling you anything. Just read it. Stop talking to me and buy it and read it.” So that’s what happened. They were right. The artwork alone is jaw-droppingly beautiful. Brian K. Vaughan was also the mastermind behind the phenomenal Y: The Last Man and Ex Machina. (Image Comics)

Suzie and Jon have the ability to freeze time itself, but only when they orgasm. The duo then decides to take advantage of their gift (in more ways than one) and rob a bank. I swear to God I’m not making this one up. Get ready for the exaggeratedly awkward realities of sex, action, the other kind of action again and lots of laughs. (Image Comics)

Small southern towns love football, but in Craw County, Alabama (Roll Tide!), it’s life. This story is an exaggerated and twisted version of Varsity Blues where the local high school football coach acts as a mob boss and uses the team as his mafia. The story starts small as one man (Earl Tubb) tries to take on an entire town. In 2015, news broke that FX picked up Southern Bastards to be developed into a new series. Fingers crossed someone catches that Hail Mary pass and we all win. (Image Comics)

We all know going to high school sucks. It’s a lot worse when you attend a school full of assassins that most likely want you dead. This late-80s punk rock tale explores the depths of depression and fitting in. Oh yeah, and murder. Lots and lots of it. This series has also been picked up for a television adaptation which will be produced by the Russo Brothers (Captain America, The Avengers) and will hopefully land on a network that can do it justice. (Image Comics)

The emotionless synthezoid Avenger creates a family for himself and moves to the suburbs. Vision wants his new family to assimilate to the ways of humanity; going to high school, grocery shopping, playing sports, etc. It sounds cutesy and funny at first, but it almost immediately takes a very dark turn. Think Ex Machina meets the dark sides of Dr. Manhattan from Watchmen. (Marvel Comics)

Doreen Green possesses the powers of a squirrel. Yes, really. I don’t think even she fully understands what she can do. I do know that she can talk to them, including her actual squirrel friend named Tippy-Toe. What seems to have started as a joke has turned into a wildly popular series. Anna Kendrick has already come forward saying she’d love to play the fury crime fighter in a movie.– and if you don’t love her there’s something wrong with you. (Marvel Comics)

This is not your typical Batman comic. Paul Dini’s writing career for comics and cartoons is unparalleled. Alongside Warner Brothers he helped launch Tiny Toons, The Animaniacs and Batman: The Animated Series. He even co-created the beloved character Harley Quinn. After 20 years, Paul was brave enough to finally talk about the time he was beaten within an inch of his life by muggers and used characters from Batman to document his journey through the human spirit. It’s very heavy, but like any good story, there’s a lesson to learn from it. (Vertigo Comics)

I’m hoping you’ve seen Captain America: Civil War in theaters by now because if you haven’t, stop reading this and go do that! As you would have guessed, it was based on Marvel’s Civil War event which was comprised of many comics crossing over and one big story arch finally put together in its own book. Now, Marvel wants us to be broke again by releasing its new event, Civil War II. The new clash is sparked when an Inhuman has visions of the future and Captain Marvel believes the Avengers should stop tragedies before they happen. You guessed it, Iron Man isn’t very happy with that. Brian Michael Bendis is wonderful and you should start reading this before you miss it. Each issue has stunning artwork and even the material of the paper/cardstock itself is just quality. It’s all worth it. (Marvel Comics)

Doom Patrol is the first series released under Gerard Way’s new DC Comics imprint, Young Animal. Expect everything with this name attached to it focusing on the weird, obscure and totally trippy side of comics. This particular title focuses a group of strange, underdog superheroes that have been resurfacing since the ‘70s in the DCU (DC Comics Universe) and with the help of Way’s brain, they’re about to be bigger than ever. If not for the stories, pick this up for the crazy variant cover artwork and support musicians crossing over into writing! (Young Animal / DC Comics)