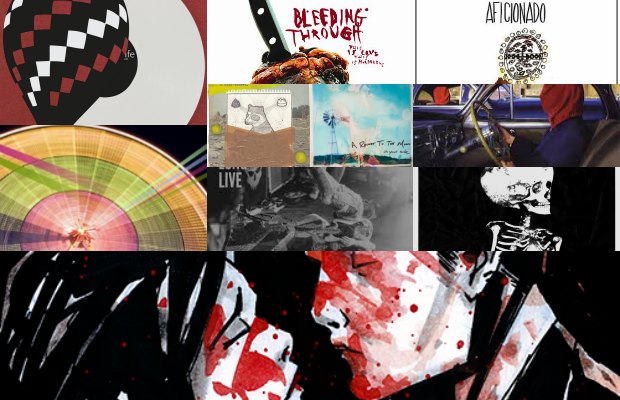 Although these bands have come to the end of their respective roads, still, we can’t let go. That’s why we’re dedicating a few more inches of column space to send off some of our favorite outfits who didn’t make it through the calendar year. Bright side: Expect reunion shows from at least six of these bands by 2017.
This list originally ran in our December issue, AP 305.

A ROCKET TO THE MOON – On Your Side

We’ve been fans of A Rocket To The Moon’s slightly countrified pop ever since we fell in love with “Dakota” and placed them on the 2008 AP Tour. Their debut full-length, On Your Side, was so warmly received, it kept ’em on the road for about three years straight, through Nick Santino’s many hairstyles. (Fueled By Ramen, 2009)

Sometimes, bands are just too good to exist past a record or two. Groups like Bear Vs. Shark and the Felix Culpa come to mind, and now, so do Aficionado, who left behind a pretty decent EP as well as an absolutely killer self-titled full-length. Passionate lyrics delivered through Tim Kasher-ish vocals atop Piebald-esque rock jams allowed for one awesome record that we’ll sadly never see a follow up. (No Sleep, 2011)

No, we don’t mean Ohio crabcore progenitors Attack Attack! (though they also called it quits this year); this Attack! Attack! came from the U.K. and played some tasty riff-rock reminiscent of Foo Fighters’ meatier cuts. The Latest Fashion is our favorite of their three records, but really, all three are solid (and each CD is currently available for £1—autographed!—in their online merch store). (Rock Ridge, 2011)

BLEEDING THROUGH – This Is Love, This Is Murderous

There was a time when Orange County, California, was the hottest place in the world for metalcore, and Bleeding Through were at the forefront of that scene with their blastbeat-laden goth-metal that inspired a legion of copycats. This Is Love, This Is Murderous is without a doubt their finest moment, and is worth checking out. (Trustkill, 2003)

This was a tough year on our editor in chief, Jason Pettigrew. He’s long praised the chaoticore of the Chariot to anyone who would listen, so when they gracefully announced their breakup earlier this year, we could hear him audibly moaning through the walls. Pick up a copy of his favorite Chariot release, Long Live, and crank it as loud as you can in his—and their—honor. (Good Fight, 2010) >>>