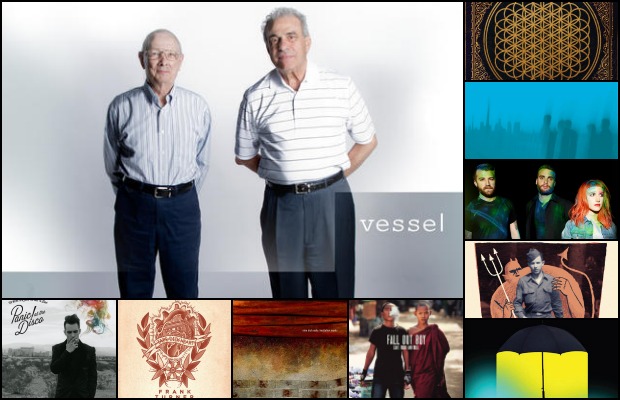 Throughout the past calendar year, we’ve reviewed close to 500 albums between our print and web arms. Needless to say, that’s a lot of rock. Our editorial team listens to music like it’s our job, primarily because it is–which is why we feel confident that the following 10 albums are the best music 2013 had to offer.

What do you call it when an aging rock band regarded as one of the forefathers of modern emo (and who have released a string of so-so albums since their early-2000s breakthrough) come back swinging with 10 songs that remind you exactly why you fell in love with said band in the first place without being too nostalgia-driven? I don’t know about you, but I call it Damage. (RCA) [Scott Heisel]

9. BRING ME THE HORIZON – Sempiternal

From implementing sacred geometry in their cover art to shrouding their new sound with occasional quiet ambiance, Bring Me The Horizon created a piece that is transcendental—both of their genre and this plane of existence. But it’s not all meditation: BMTH are anything but calm as they demand middle fingers raised while taking a sonic sledgehammer to the foundation of your deepest beliefs. Sempiternal will go down in their history as a monumental turning point, a harbinger of the next generation of heavy music. (Epitaph) [Cassie Whitt]

The snark is always the same: “You can’t save rock ’n’ roll with a pop record.” Oh, really? Fall Out Boy, who burst back into our scene and seamlessly reclaimed their throne, have built an extraordinarily strong case against the naysayers with an album that both respects their roots and captures all the motifs needed to fully contaminate global airwaves with whimsical wisdom (“Sometimes before it gets better/The darkness gets bigger/The person that you’d take a bullet for is behind the trigger”) that had our car-crash hearts all along. (Island) [Cassie Whitt]

While the majority of his mentors and colleagues should have their new discs shipped with snooze-button hardware, Nine Inch Nails CEO Trent Reznor continues to bridge his engaging history with today’s electronic music subculture. Hesitation Marks is loaded with moments of propulsive menace, jagged funk, loping techno and his own reconstituted musical past. Which means Reznor isn’t a “rock musician” as much as he is a goddamn artfulcrum. (Columbia) [Jason Pettigrew]

Frank Turner has been plucking away at his acoustic guitar since 2006, and this year quite a few more people caught on—including Interscope Records. Like his past work, the songs of Tape Deck Heart are about playing shows, drinking with friends and getting your heart broken, but it’s a little darker and more personal—and still just as poignant. Plus, who else used the word “fractious” in a song this year? (Xtra Mile/Interscope) [Brittany Moseley]