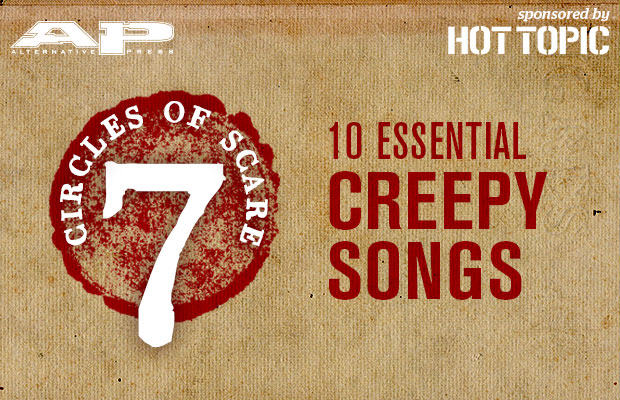 For most people, Halloween is just a day of the year that gives them permission to indulge in candy and play dress-up. For others (like myself), it’s a lifestyle, and frankly, with music this bloody and fun, why don’t you join our dark side?

For those of you who like your creepouts based in history, I give you Countess Elizabeth Báthory de Ecsed, whose claim to infamy was murdering hundreds of young women. Legend blossomed that the countess used to bathe in the blood of virgins as a means to preserve her youth. Aiden extend her legend with this musical ode to the creepy countess. (Knives; Victory, 2009)

If you’re not including this quintessential goth song on your Halloween playlists, you’re absolutely doing it wrong. Clocking in at more than nine minutes [Ed. Note: we've embedded the 3-minute version here to accomodate short attention spans. Hear the full version.], this song paints a portrait of a vampire using focal point actor Bela Lugosi of Dracula fame, with minimal instrumentation and muted percussion. Originally released in 1979, it’s considered to be the first goth-rock record ever. Undead, undead, undead… (Crackle; Beggars Banquet/4AD, 1998)

In this fast-paced track, horror-punks Calabrese attempt to convince us vampires don’t exist. Right. Because “it was only a kiss” isn’t exactly what an undead manipulator would repeat to us or anything. We’re onto you, Calabrese. (The Traveling Vampire Show; Spookshow, 2007)

For those unfamiliar, Creature Feature are a criminally underrated horror-rock duo whose music sounds like it came directly from an episode of The Munsters. “Buried Alive” is a plague-level catchy ode to Edgar Allan Poe wrapped around a chorus about premature burial. (The Greatest Show Unearthed; Sumerian, 2007)

Though widely interpreted as an allegory for drug addiction, taken at face value, this slinky song is about being preyed upon and eventually eaten by a giant spider. Perhaps the creepiest part of it, however, is how sexy it manages to sound in spite of descriptions such as feeling like you’re “being eaten by a thousand shivering furry holes.” (Disintegration; Fiction, 1989)

Between albums, Fearless Vampire Killers dropped this single specifically for Halloween, spinning a seasonal ghost tale through their signature layered harmonies. The lyrics read like an 18th century horror poem, telling the tale of the vengeful spirit of a man beheaded for having “bedded” a Duke’s wife. (Goremount, 2013)

FROM FIRST TO LAST – “Ride The Wings Of Pestilence”

Quoth the Sonny Moore, “I’ll hide you in my walls/Your body will never be found/I’ll wear your skin as a suit/Pretend to be you/Your friends will like you more than they used to.” And that’s just the chorus of this gruesome song, which takes you inside the mind of a teenage serial killer. (“The scent of your insides,” hmm…) (Dear Diary, My Teen Angst Has A Body Count; Epitaph, 2004)

The Misfits are not just a horror-punk band. They are the horror-punk band, and one of their most popular songs, of course, howls homage to the most macabre day of the year, listing and disturbingly juxtaposing the innocent aspects of the day with the downright horrifying—like “candy apples and razorblades” and “bonfires burning bright” to “burning bodies hanging from poles.” (Legacy Of Brutality; Caroline/Plan 9, 1985)

MY CHEMICAL ROMANCE – “Vampires Will Never Hurt You”

Though this song has little to do with actual vampires and more to do with non-fictional forces of manipulation (because of the heavy hearse-and-stake imagery), it’s the song MCR credit for “lock[ing] in that darkness” of their band in its infancy and convincing some that they were vampires. (I Brought You My Bullets, You Brought Me Your Love; Eyeball, 2002)

Vocalist Anja Huwe takes this always-creepy German outfit’s spook factor to the next level in this track with her distant drone repeating “hand in hand,” which calls to mind incantations muttered while toiling over a cauldron in a dungeon. We don’t know just what the band are “hand in hand” with in this song, but the quiet atmospheric wailing gives the impression it might be some lost souls they’ve just conjured. (Fetisch; 4AD, 1983)