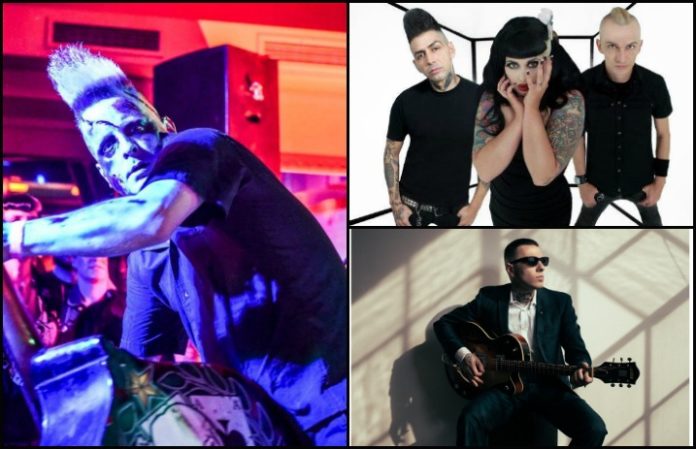 Ground zero for psychobilly (leader Kim Nekroman rocks a coffin bass!), Nekromantix have been churning out fun, dark tracks since 1989. Though the singer-bassist has been the only consistent member of the Danish trio, what has remained throughout their career is their grit and energy. With album titles such as Life Is A Grave & I Dig It!, you really can’t go wrong with the ’Mantix catalog.

Check out: “Gargoyles Over Copenhagen”

What started as a freeform outlet for Nekroman and Patricia Day of Peanut Pump Gun became its own phenomenon in the aughts. With Day handling lead vocals and double bass, HorrorPops used humor and haute couture to cause a stir, especially on 2004’s Hell Yeah! (Hellcat). Fashion magazine Vogue even glommed on to Day’s signature style—but the musician laughed about it in subsequent interviews, since she and her bandmates have been rocking out like that for 15 years.

Jim Heath aka the Rev. Horton Heat got his start in Dallas in 1985, blending punk, rockabilly, country and surf, earning a coveted spot on the Sub Pop roster with 1990’s Smoke ’Em If You Got ’Em. In his storied career, Heath and co. would take their freaky tunes everywhere from Tony Hawk video games to the Warped Tour.

A revolving door of singers hasn’t stopped Canada’s Creepshow from carving their niche. Formed for the sole purpose of writing odes to horror films—think more Elvira and Evil Dead than Eli Roth—this quintet infuse sweet female vox with swift riffs and hammering drums.. They’ve mostly been performing in Europe, so catch them if you can when they announce U.S. concert dates.

Check out: “The Devil’s Son”

Imagine if Frank Sinatra fronted a psychobilly band—they’d probably sound like Detroit’s Koffin Kats. Crooner-bassist Vic Victor has a timeless delivery that could work in scuzzy punk clubs or happenin’ lounges. “The touring trio’s current home is out on the open road,” according to their Facebook page, so do yourself a favor and witness the Kats in person.

Check out: “The Bottle Called”

“Only the Meteors are pure psychobilly,” say the fans of these British legends. Going strong for 35 years, the Meteors set the tone for the genre—a tone that is something akin to Jerry Lee Lewis in need of an exorcism. P. Paul Fenech put on mad gigs back in the day, spitting chicken blood and whipping up “wrecking” pits that became a staple of the scene.

Check out: “Psycho For Your Love.”

Guitarist Kristy “Poison Ivy” Wallace might balk at the psychobilly label in interviews, but her Cramps are credited as genre pioneers. From the 1970s to the 2000s, she and late husband Erick “Lux Interior” Purkhiser reigned with shimmying songs like “Bikini Girls With Machine Guns.” You can feel the (nec)romance in every Cramps number.

Check out: “Naked Girl Falling Down the Stairs”

Way before Lady Gaga donned her meat dress, psychobilly brawler Mark “Sparky” Phillips was layering his face in gelatinous globs and war paint. Armed with a razor-throated voice and a rubbery guitar, Sparky and Demented Are Go crushed audiences with their metallic rock. It wasn’t pretty or PC, but DAG commanded a sizable following well into the 21st century.

Faster than a speeding T-bird, more vicious than a junkyard dog, Mad Sin live up to their name. With more than 25 years in the business of big circle pits, these German punks know their way around a fretboard and a drum solo. Koefte deVille leads the charge like a crow with a taste for blood. His caws will make your hair stand on end, while the furious instrumentation will make you want to do donuts in a tricked-out car.

With Colin The Dead’s rattling-bone bass, Phil The Beast’s relentless drums and Rene D La Muerte’s flashy guitar moves, the Brains are part of the next generation of psychobilly. Citing Mad Sin and Nekromantix as influences, these fellows build on that foundation with gleeful group vocals and playful music videos. Hearts race and fists fly on albums such as 2010’s Undead Nation (Stomp).